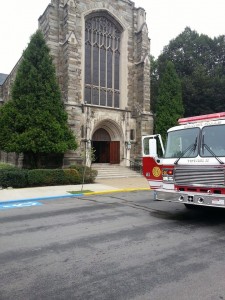 A fire truck sits outside First Presbyterian Church of Beaver Falls following an elevator engine fire that left the building filled with smoke.

There are new pew cushions at First Presbyterian Church of Beaver Falls. There’s also a new coat of paint, and the stone areas inside the large, Gothic sanctuary are sparkling once again. It was all part of an eight-month project that was not in the plans for the congregation but that will be a constant reminder of a disaster averted.

A fire in the engine panel of the church’s elevator resulted in an estimated $200,000 in smoke damage to First PC of Beaver Falls in early September. It caused that week’s worship service to be held outside in a tent, redirected the congregation’s weekly community meal to another church in town and eventually moved about four months’ worth of Sunday services to another part of the building. But all in all, First PC of Beaver Falls has survived the challenge and has, if anything, actually gotten stronger because of the situation.

“It was great to see the way the church community and the local community responded,” Pastor Chris Noyes said. “It was just a great testimony to how the community supports. You could just see the sense of God in that way.”

On a normal Friday morning on Sept. 5 in the western Pennsylvania town, First PC janitor Don Milliken opened the door to the church around 8 a.m. and was immediately enveloped by a thick wall of smoke. He attempted to go inside to find the cause but had to retreat because of the smell.

“There was a white smoke all though the sanctuary,” he described on the WPXI Channel 11 news that day. “I didn’t see any flames but I started to choke. It was a real acidy smoke.”

(The WPXI Channel 11 television news report can be viewed here.) 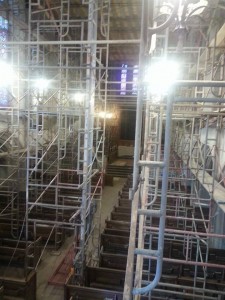 The intricate scaffolding that was needed to clean the sanctuary caused First PC of Beaver Falls to relocate its Sunday morning worship services for four months.

The cause turned out to be a malfunctioning elevator engine in the basement of the church. The panel was smoldering and when the doors opened for the firefighters, the outside air fanned the flames and caused a flash. And, because of the hydraulic oil, water could not put out the fire, so firefighters had to use a chemical extinguisher to do the job. While the fire was contained to the elevator engine, the smoke filtered throughout most of the church, leaving behind a stench that took months of cleaning to get rid of.

“The smell was just horrible,” Pastor Noyes recalled. “I’ve never smelled something so disgusting in my life. It was this thick, oilish smoke.”

Since the congregation’s choir had met the night before and did not notice any smoke, it was presumed that the fire started sometime overnight. Had the fire been able to stay lit for a few more hours, who knows how bad the damage could have been.

“It’s an old stone structure, but there’s wood around in the basement,” Pastor Noyes said. “It could have done some damage. It definitely was a great blessing that it was contained to what it was and fire damage was very minimal.”

First PC’s scheduled Sunday service two days later had to be moved outside. The church was able to rent a tent and hold the service there for its regular 70-80 worshipers in conjunction with an outdoor/rally day Sunday breakfast that was held at the manse in the adjoining yard. For the next week, the cleaning began inside and by the following Sunday services were able to be held back in the sanctuary. Worship stayed in the sanctuary until after Christmas at which time from early January to late April extensive cleaning was done there. During those months, Sunday worship was held in the church’s chapel area.

The time-consuming part in the cleaning of the sanctuary was setting up the large scaffolding in that room. “Sponge blasting” helped clean the stonework and get the smell out of the wooden supports in the roof. Walls were also repainted and pew cushions replaced before all was said and done.

In the wake of the fire and cleanup, First PC of Beaver Falls now has a sanctuary with new paint and freshly-scrubbed stone.

What could have been a hassle for those close to First PC of Beaver Falls was instead taken in stride and not seen as a setback at all.

“The people in the church responded well,” Pastor Noyes said. “In a lot of ways, understanding that it was an inconvenience, it could have been worse.”

According to Pastor Noyes, no activities were actually canceled following the fire, they were just moved. The church’s weekly Wednesday meal had to be relocated out of the First PC kitchen, which is in the basement close to where the fire was. Nearby Central United Methodist Church agreed to host the dinner in the interim in what ended up being one of many blessings that came out of an unfortunate situation.

“In a lot of ways it didn’t keep us from doing things, it just made us be a little bit more creative,” Pastor Noyes said of the fire. “We had to be in a tighter space, which demanded that we interact with folks that we maybe don’t always see because of the large space of the church. It was an unintended blessing in the sense that when we worshiped, it wasn’t in a large sanctuary. We didn’t have ‘assigned seats’ so to speak. People sat in different places. You sat closer to people. There was just an intimacy that, to a person, they appreciated.”

The downstairs kitchen is still not being used since access is limited because the elevator has not been repaired. It’s unsure when the elevator will be fixed, but chances are that’s just another obstacle that won’t slow First Presbyterian Church of Beaver Falls down one bit.