Hikers turn to Church of the Mountain on Appalachian Trail

Its name pretty much says it all. The Presbyterian Church of the Mountain is just that – a congregation located in the Appalachian Mountains in Delaware Water Gap, PA. What the name doesn’t tell you is that the congregation opens its doors to complete strangers, providing shelter any time of the day, 365 days a year. 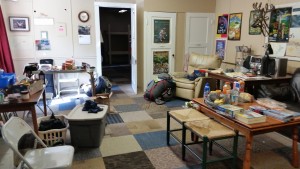 The Church of the Mountain hostel shows plenty of activity as hikers make their way along the Appalachian Trail.

The Church of the Mountain is located in eastern Pennsylvania along the Delaware River, which makes up the state border with New Jersey. Hikers will know Delaware Water Gap as a town that sits on a trailhead, or entrance, to the Appalachian Trail. They will remember the Church of the Mountain as a place that offers necessities for the weary walkers who are on an excursion along the 2,200-mile path that stretches from Maine to Georgia.

“We’re opening up our church building to people who come and go,” the Rev. Sherry Blackman said explaining the church’s mission. “It’s all about hospitality.”

Located just one block away from the trailhead, the Church of the Mountain has been a place of support for hikers since 1976. The church’s basement was transformed into a hostel nearly 40 years ago and has since been a place for through-hikers (those walking the entire trail) and section hikers (those walking just an area of the trail) to stop for the night. It’s been well publicized in trail books and hikers’ blogs, resulting in an average of 1,300 walkers per year taking advantage of the Church of the Mountain’s resources.

“This outreach is great in the sense that here’s a church living out the mission of Jesus Christ,” Rev. Blackman said. “Hikers are basically homeless when they are on the trail. They lay their head wherever they end up for the night, often at shelters that are on the trail, often pitching their tent or sleeping under the stars. We’re inviting them into our sacred space and they don’t smell good, they don’t look good. They are all hungry, they’re dirty, they’re stinky.

“The other part of it is what it does for the congregation itself. You have a group of people who are extending themselves — it’s not just opening the building. The congregation itself is involved with the strangers from cleaning up after them to wiping down the toilets and bringing in fresh towels to engaging in conversations with them. It’s had an impact on the nature and the character of the congregation, too.” 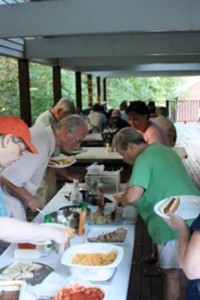 The Church of the Mountain gathers for a Thursday evening hiker’s pot luck feast that the church offers from June through August. The church feeds up to 50-60 at this dinner.

Rev. Blackman has only been the pastor at Church of the Mountain, which averages between 80-90 on a given Sunday, since June 2014, so she isn’t familiar with the full history of how the church became such a vital part of the trailhead. She recalls hearing how hikers would regularly stop in town packing and unpacking gear and going to the post office. The church members began offering shelter and showers for the hikers in their homes, and eventually the church turned its basement into a hostel. It is currently the oldest hostel on the Appalachian Trail.

Hikers can stay in the hostel for a maximum of two nights, with some exceptions like if a hiker is injured. The hostel is not open to people with car support, scout groups, tour groups or short-distance hikers, and there is a strict no-alcohol, no-illegal-drugs policy.

The hostel has bunks for eight people, but the hikers can also pitch a tent in the church’s yard and sleep there. There’s a living area with couches and tables and a “hiker’s box” for items to be discarded for other hikers to rummage through and use if needed. The church also offers a shower and clean towels but does not have a kitchen. It falls on the church’s volunteers to clean the hostel daily and wash the towels. A lean-to called “Matt’s Place” is also available for the hikers to use, and from June to August the church has a Thursday night pot luck hiker’s dinner that attracts between 50-60 long-distance backpackers.

Rev. Blackman, a second-career pastor who was previously a journalist, has collected many of the stories she has heard from hikers. Many are inspirational, like the one of a 70-year-old man who was hiking the Appalachian Trail for the second time as a trail chaplain. The first time he hiked the trail was to help him grieve the loss of his 4-year-old grandson.

“He said it was the only way he could truly grieve his loss,” Rev. Blackman said, recalling the conversation. “He said by the time he finished the trail he could live again.”

Rev. Blackman also officiated a surprise wedding on the trail in April that involved a “Ridge Runner,” a person hired by the AT Conservancy who “runs” a 42-mile section of the trail to check on the condition of the trail as well as on the hikers and the shelters. With a formal wedding planned a month later, the groom made the comment to his fiancée that he “just wanted to get married in his hiking clothes,” so the fiancée arranged the ceremony on the trail. 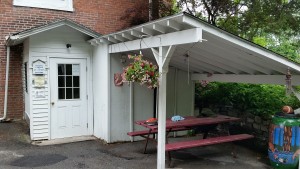 This lean-to is just one of the many shelters offered to hikers at the Church of the Mountain.

It’s just part of the interaction between Rev. Blackman and those on the trail. While she is there to offer spiritual guidance when asked, somewhat surprisingly, that component is very nondescript by both her and the Church of the Mountain. She admits that spiritual thoughts are something that many are already in tune with while on the trail.

“The purpose of the hostel is hospitality and in this way we also serve the community,” she said. “There’s no agenda to evangelize in the sense that we often think about evangelism. It’s very evangelistic in the sense that we are open to the stranger, we will have any conversation, we have food. A hiker is typically quite open to some very big conversations because I think being on the trail lends itself to contemplative thinking, meditation, asking yourself the big questions… You don’t have the same distractions on the trail that you have in everyday life.

“Just being out on the trail, there’s nothing to separate you from your fellow hiker. There’s no status, there are no cars, there’s no job, it’s you. I think by the time they get here, they’re ready for those conversations, they’re ready for prayer. … This is not a forced ministry in the sense that we get ‘em here and now we ask them, ‘Do you know Jesus as your personal Lord and savior?’ Hospitality is very authentic and that in and of itself crosses hearts and minds. The only agenda is true hospitality in the name of Christ.”

Reaching out to those who are passing through. It sounds very scripture-based, and it’s exactly what the Church of the Mountain is supplying on a regular basis these days.

“We are doing exactly what Christ called us to do, and in this is great satisfaction,” Rev. Blackman said. “It keeps us constantly aware of the other. We have hikers that come from around the world. We offer ourselves, and this is the way we love God and love others as ourselves.”