First-call pastors fresh out of seminary school with plenty of enthusiasm and desire looking for a congregation to begin their ministry. Small churches searching for a preacher to lead them in new and exciting directions. Seems like a match made, well, from heaven. 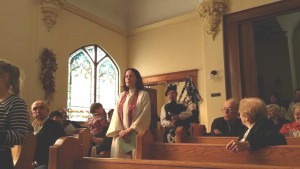 The Rev. Elizabeth Campbell-Maleke presides over a Scottish Heritage Service at First Presbyterian Church of Williamstown, WV. The Rev. Campbell-Maleke came to the church through the Small Church Residency Program.

It’s the kind of relationship that is fueling the Small Church Residency Program within the Presbyterian Church (U.S.A.). Formerly known as “For Such a Time as This,” the Small Church Residency Program places fresh-out-of-seminary pastors into churches where one is needed with the hope of giving the pastor a starting point and also revitalizing the congregation with which it lands. Currently, there are five churches in the Presbytery of West Virginia that participate in the program.

Leading the charge for this program, which is only a handful of years old, in West Virginia is Pastor Craig Butler, the Transitional Associate for Congregational Support at the Presbytery of West Virginia. He has seen drastic changes in the churches that have participated.

Along with the 24-month agreement between the church and the minister, the church also must agree to support him or her with a full-time salary at the presbytery minimum. A church also must have less than 100 members or less than 75 in worship, and the presbytery needs to supply a pastor mentor and organize a monthly cluster learning group with other new pastors. Presbyteries are also required to pay their portion of a salary support grant, which is $3,000 per year for one church or $2,500 yearly for multiple congregations, which is the case in West Virginia.

(How are these preachers making a difference in their congregations? Click here to find out.)

“It’s been a really successful program, and I think it’s been successful because it really is faithful to the whole concept of the call,” Craig said.

All four of the pastors are in their 40s or younger. It has led to an interesting dynamic, especially at Kuhn Memorial where Pastor Pat Ryan is taking over for a Commissioned Ruling Elder who was following a pastor who had been there for two decades.

“Pat just brings a whole new perspective,” Craig said. “Younger man, he’s very tech-savvy and he’s been introducing the congregation to that kind of thing. … It’s not necessarily because the pastors are younger than the average church member. What really adds a lot of energy is the fact that the congregations literally take on a teaching role. They become teaching churches. And what they’re teaching is what seminary doesn’t teach and that’s how to be a pastor. I think that just inspires the congregations.”

Another example of the work being done is at Highlawn PC of St. Albans where Pastor Nancy Didway organized a group of women in their 70s into a liturgical dance team that helps lead worship from time to time. Another person in the church volunteered to teach archery at Bible School, further accenting the change that is occurring there.

Smaller churches in West Virginia that are looking for a new pastor and fit the requirements of the Small Church Residency Program are made aware of the program by the presbytery. The attractive part for the church is that it gets a short list of 5-6 names to choose from and it knows those candidates are seminary graduates who are willing to serve in a small church that is in either a rural or urban setting.

“The people whose names they get are saying, ‘This is what I want to do. I feel called to do this kind of ministry,’” Craig said. “By in large these churches feel comfortable with the fact that they’re not just getting a pig in a poke. They have been looked at. They know that everyone’s aware of the program and it’s what they feel called to do. It gives the congregations a greater sense of comfort. They’re not getting someone who’s desperate to have a call, rather they’re getting someone who’s committed to doing this type of ministry.”

However, the program isn’t for every church. One roadblock, Craig said, is that the church is 100 percent responsible for the salary package of the minister and he or she must be hired on a full-time basis. That and the role of the church in this process have caused some congregations to look elsewhere for a pastor.

“Some of these churches that I approach, while they think it’s a great idea, they’re a little stymied by the fact that what we expect of them is to really help their pastor learn how to be a pastor,” Craig said. “Most of them have the mistake impression that’s what seminary does and it really doesn’t.”

The Presbytery of West Virginia is the only presbytery in the Synod of the Trinity that participates in the program. Craig is unsure why.

“It does suit West Virginia,” Craig said. “Across the Synod, we have lots of areas that are rural and hard to place, but I don’t know if the people in the Presbytery of West Virginia are more willing to take a risk?

“I haven’t heard from anyone who said it’s a waste of time or it’s a waste of money. Everybody who knows the program really feels like it’s one of the best things we’ve done in the last few years.” 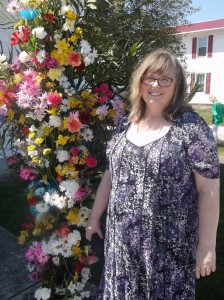 Pastor Nancy Didway has been preaching at Highlawn PC of St. Albans, WV, for four years, the first two of which came through the Small Church Residency Program. She was retained by the congregation at the end of the two-year program.

Another drawback might be that churches are leery about only having a pastor for two years. However, Craig urges Executive Presbyters to let their congregations know that the relationship can continue past two years, as has been the case with the churches in the program in West Virginia.

“The complexion of all five of those churches has really changed,” Craig admitted. “It’s a combination of the energy these new, young pastors bring in and the fact that the congregations are feeling something different, and I think a lot of that goes to being a teaching church.”

Trying something new can be scary, but Craig urges churches that are looking for a new direction to give the Small Church Residency Program a chance. And some prayer.

Note: Anyone wishing to learn more about the Small Church Residency Program can contact Craig Butler at craig.butler@wvpresbytery.org or Cindy Cushman at the PCUSA at (502) 569-5381 or at residency@pcusa.org.