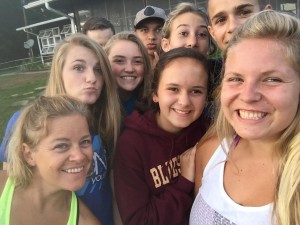 Sarah Specht knows the struggles teenagers are facing these days. A substance abuse epidemic is plaguing communities everywhere, and the new program director at Bluestone Camp and Retreat in Hinton, WV, is making it her goal to provide a space where kids can thrive without the everyday pressures they are encountering.

“There’s a lot of heroin here right now,” Sarah said of her hometown of Huntington, WV. “It’s heartbreaking how many kids we see from divorced families, being raised by a grandparent or just overly stressed for being a teenager. It just feels like it’s my goal to give them these safe places to just be a kid again.”

Sarah began her new role at Bluestone Camp on Jan. 8, but she is no stranger to the facility. During the past decade she has held down the roles of craft leader, key leader and counselor. A stay-at-home mom with two children, Sarah has also been the Christian education director at Highlawn Presbyterian Church in Huntington, WV, for the past six years.

“Watching the counselors deal with the campers on such an open level but really responsible just really impressed me,” Sarah said. “I continued to go back year and after, and I now have two kids who are 10 and 13 and they’ve pretty much grown up there. They are there at least two weeks for summer camp and we go on almost all of the retreats.

“They (her kids) are not on the internet, they’re not on their phone, they’re making true connections with kids their age, with kids older than them who they can look up to. It’s just nice to not be in reality for a while and let them grow in that way instead of being so worried about being in middle school, what their friends are doing, school work or any of that kind of thing.”

Two summers ago, Sarah began working on the program director side of things at the camp and eventually landed on the camp’s task force. Discussion led to the possibility of hiring a part-time, year-round program director, and when Sarah became interested in the position, she stepped away from the task force so that she could eventually apply for the opening. 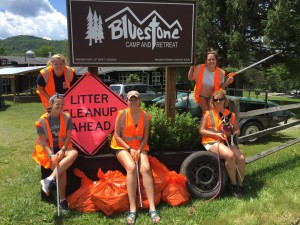 “Our presbytery (West Virginia) realized it’s great to have that summer job, but it’s normally a college kid in that position,” Sarah said. “They look at it as a summer job. They don’t look at the rest of the year of trying to get people to the retreats, trying to make sure more kids are coming to summer camp, and so they’ve grown it into a year-round job.

“They’re great kids, but they’re in their 20s. They go back to college and they go back to their majors, and they love the camp, but it’s not on their radar to think how do we publicize camp or how can we make sure more people are coming.”

On a good week, Bluestone Camp will have 100 campers for a week of activities. One of Sarah’s objectives, of course, is to generate enough interest that that number is achieved on a regular basis.

“The main goal is to get more kids,” Sarah admitted. “I’d like to do a couple focus groups with campers and one or two with parents and just see what do they want or need in a camp. Would more parents come to retreats there if we had a couple cabins that have queen-size beds and TVs instead of bunk beds? I want it to be a retreat center where more than just kids come. How do we make it more user-friendly? How do we spread the word that it’s such a special place to spend time at?”

Sarah continues to work part-time at Highlawn Church while also spending 20 hours a week at Bluestone Camp, where she hopes to keep that special relationship between the campers and staff.

“There’s a sense of community kids leave with,” Sarah said of what makes Bluestone unique. “They’re not allowed any electronic devices. The counselors there are young enough to have a lot of fun with the kids but they’re old enough to be responsible for the kids. These kids can go to their counselors with problems they may not want to go to their parents with. They live as a family for that week and they really trust each other by the end. They make lifetime friendships.

“It’s very missional to me. Getting kids there is a huge part of my heart.”

And that makes Sarah a perfect fit at Bluestone.

“That’s truly what I think God has called me to do in my life right now is just let kids be innocent for a little bit longer,” Sarah said. “Just let them have fun and be kids and not worrying about being an adult quite yet.”