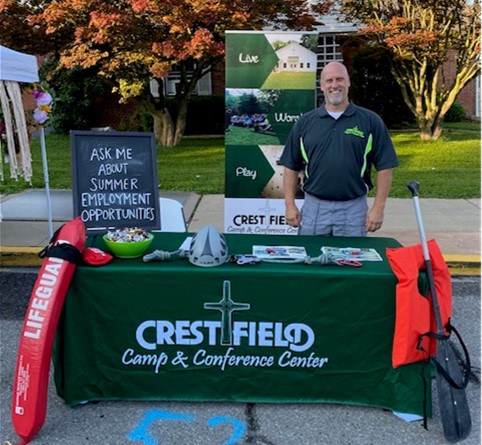 Mike Little has spent 14 years as the buildings and grounds keeper at Crestfield Camp and Conference Center in Slippery Rock, PA. He is now the camp’s new executive director.

Mike Little has worked in construction, in banking, as part of a moving company and has been a business owner. On Sept. 1, he officially added “executive director” to his resume when he took over as the head of Crestfield Camp and Conference Center in Slippery Rock, PA. And even though he doesn’t have any experience being the director of a camp, his work history and skill set have paved the way for him to excel here.

“With the different positions and jobs I’ve had during my lifetime, I feel like they all lead to this position,” he said. “They all seem to have a little bit to do with what I’m doing now as an executive director. It just seems natural.”

One thing Mike certainly isn’t lacking is a familiarity with the camp. For the past 14 years, Mike has been the buildings and grounds keeper and challenge course director at Crestfield (a 501c3 organization that is a ministry of Pittsburgh Presbytery). And when the then executive director announced he was leaving as Crestfield’s executive director in February after 15 months on the job, Mike stepped in on a part-time basis to oversee the day-to-day operations of the camp.

Mike had resigned from Crestfield late last fall when the camp staff was furloughed, with the effects of the pandemic forcing staff cuts. When the director left, the Crestfield board reached out to Mike to see if he wanted to fill the position temporarily, but he declined. His love for the camp led him to quickly reconsider and agree to a part-time role by the spring of 2021. Then when the national search process began for a full-time executive director, Mike applied and was soon selected to fill the position.

Due to the pandemic, there have not been overnight camps at Crestfield the last two summers, but its day camps have been successful. These events have allowed Mike to familiarize himself and gain experience with the coordination needed to host those gatherings.

It’s been a difficult time for camps to regain their footing as the coronavirus pandemic has extended into a second year, making it doubly hard for someone new in a leadership role to get things going. But this is the challenge Mike has in front of him, and he’s ready to tackle it head on.

“We were pretty quiet for about 12 months,” Mike said of Crestfield. “I’ve heard that staffing is an issue for camps across the country. It’s affected us in that we have a new start. I’m the only full-time person now. It’s forced us to think a little differently about staffing. We had 7-8 full-time employees before the pandemic.

“We haven’t had the opportunity to really truly experience what overnight camp might look like yet during the pandemic. We’re planning to do summer camp in 2022. We are hosting a confirmation retreat and a tweener retreat for Pittsburgh Presbytery in February and April. That will be our first large kid event since the pandemic.”

One of the positions that has been eliminated is the food service manager. With that person no longer employed, Mike has looked for ways to fill the void, and he has done so through a local caterer who supplies the food for the camp with little or no preparation needed by the camp staff.

“We’ve ended up saving quite a bit of money with that arrangement,” Mike said. “Trying to figure out how to do things a little bit differently has given us a new start.”

Working out staffing is just one of the goals Mike has as he gets his feet wet at Crestfield this fall.

“We’re going to try to be more financially fit,” Mike said. “In case something like this ever happens again we need to be more conscious of our finances going forward. I also want to get summer camp back and booming so kids are in camp experiencing God, faith, learning about their faith or even discovering their faith. I really want to concentrate heavily on getting good summers going again like we used to.

“We want to continue hosting our guest groups or renter groups and getting church youth groups up here for retreats – adults, women’s and men’s. Continue doing that and doing it well.” 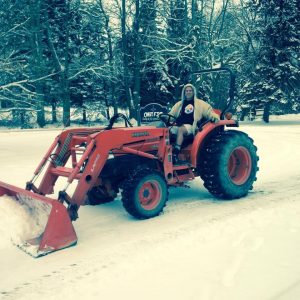 Mike Little knows his way around the Crestfield Camp property, and he is usually seen in his signature shorts regardless of the season.

Crestfield is a 226-acre property that has a pool and offers canoeing, archery, high ropes, ziplining and team-building elements. It also hosted outdoor weddings this year, a first-time option at the camp. It has a lodge, several cabins onsite and two cottages that offer varying types of accommodations. Building a second lodge is part of Mike’s larger improvement plan for Crestfield.

Mike has already left his mark on the camp in his first month as executive director when he used a controlled burn to take down the annex building from the campus. Upgrading the look and feel of the camp is high on Mike’s list.

All of these improvements fall in line with a comment Mike heard years ago from a camp consultant who said he believed Crestfield had the potential to be one of the top camps in the country.

“I have been to a lot of camps, and I think we have a great location, great facilities, wonderful land that’s very usable and flat and big fields that we can play in. Being just north of Pittsburgh gives us a good location for people to get in and out of. We’ve always kept faith as the foremost important thing. We want kids to experience faith and our guest groups to experience faith through our hospitality. I think that makes us a pretty special spot.”

In 2007, Mike’s wife, Becky, was hired as Crestfield’s program director and filled that position for eight years. With Mike being a landscaper, he was happy to move north from the Pittsburgh area to find work near Crestfield. Coincidentally, around the time Becky started at the camp, its facilities director announced he was leaving, opening a door for Mike to also be employed at Crestfield.

Now, he’s running the day-to-day operations of the camp in a position that fits perfectly for him.

“God definitely brought Becky and I to Crestfield,” Mike said. “Since I have taken over, it seems like lots of things have happened that have really helped us to get through this difficult time. God has been providing constantly as we recovered from this difficult period. Things have been happening that helps me feel better, that this is where I’m supposed to be and what God wants me to do.”