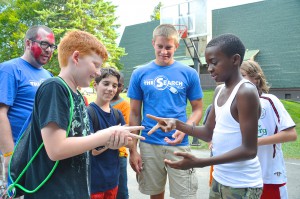 Pine Springs Camp has seen a spike in summer camper numbers during recent years and through a $1.8 million capital campaign it is continuing to move forward.

Camps have experienced plenty of ups and downs over the years. Just since the turn of the millennium, a major recession and some world events all can be blamed on some level for a decline in participants. But despite that downturn, the economy seems to be bouncing back and people are returning to the “great outdoors” to reconnect with nature and create lasting friendships.

Pine Springs Camp in Jennerstown, PA, which is affiliated with the Redstone and Washington Presbyteries, is one of those camps that has experienced a revival of sorts in the past decade. The creation of day camps and a service camp for youth groups of middle schoolers has helped Pine Springs bump its summer overnight attendance from a low point of around 600 to four figures.

“Camping over the last 15 years has been a challenge as far as recruiting campers,” said Greg Davis, the Executive Director at Pine Springs. “But the last three years we have hit the 1,000 mark in campers served.”

With the spike in interest, Pine Springs decided to do a strategic plan on ways to improve the camp. It wound up with a focus of needs and five goals and benchmarks it felt necessary to reach. The result was a $1.8 million capital campaign called “Faith for the Future” that would, among other things, construct a new dining hall in a multi-purpose building called “The Refuge.”

“Faith for the Future is an investment in long-term funding for capital improvements and strengthening our camp scholarship resources,” explained Craig Kephart, the Executive Presbyter at Washington Presbytery. “It will allow us to enhance activity areas around the property for recreation and active learning that are so much a part of the Christian camp experience.”

Winterizing cabins to host year-round groups and increasing scholarship funds were two other things that the camp is aiming to do through the capital campaign. 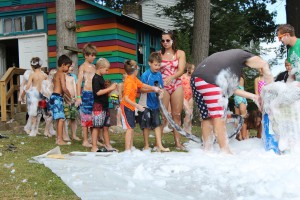 “We want to make camp affordable to everyone and don’t want finances to be a deterrent for any camper,” Greg said. “We want to increase the scholarship fund endowment to $150,000. That fund is named in honor of Carrie Foust, who was a camper and counselor for two summers and was diagnosed with leukemia. She passed away the second summer that she was a counselor. Her father is a Presbyterian pastor in our presbytery – Kent Foust. It’s a special connection.”

“We don’t want to be a conference center,” Greg added. “We want to be a place where people retreat and relax. We want to focus on the retreat aspect of it, especially with larger youth groups. We want them to get away, relax and reconnect with God.”

The three-year capital campaign, which is in the first year of the public phase following a year in the silent phase, has been going well thanks in part to two families that donated $500,000 each. A $250,000 matching gift was part of the one donation, and Greg was able to get the reciprocal funds through conversations with congregations and families. The income has pushed the amount raised for the capital campaign to nearly $1.5 million and allowed for groundbreaking to occur for “The Refuge” dining hall in late October. Greg is hoping the building will be ready for use by June of 2017, which will mark the 70th anniversary of the camp. 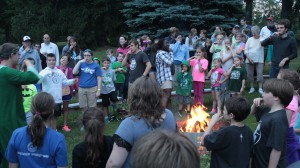 Campers enjoy an evening around a bonfire in Jennerstown, PA.

“This is something that is a great, great thing that we can point to as a presbytery to say that God is doing awesome things here,” Greg said. “It will provide generation upon generation of camping experience. And we’re in a rural area. I think it will be a neat facility for the community of Jennerstown and Somerset. I don’t want to be a wedding facility but I’d love to be where the Rotary could meet that would bring people to camp, especially during the week.”

While Pine Springs is doing several things to expand its camp experience to year-round activities, one thing it does not want to lose sight of are its summer camps. That, and the overall feeling the campers take with them, are crucial components in the direction the camp is looking to go.

“We really feel like camping is a transformational experience that kids and adults need,” Greg said. “It’s been that way in our presbyteries for years. Our mission is that we want every camper to experience a vital encounter with Christ.”