Seniors thriving through Chestnut Hill Church’s “Center on the Hill” 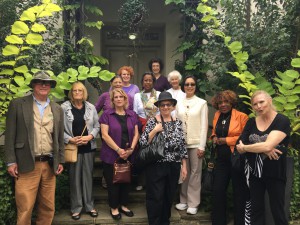 A group from the Center on the Hill senior center gathers for a picture during one of its monthly trips. The Center reaches over 1,000 people per month.

A Christmas miracle? Maybe. Either way, a sizeable donation that came to the Presbyterian Church of Chestnut Hill on Christmas Eve in 2005 has been turned into a widely successful community outreach. A $2 million gift that the northwest Philadelphia congregation received to underwrite a full-time minister to senior adults and an unexpected but undesignated bequest of $400,000 has helped support the church’s “Center on the Hill: The Place for Active People.” The Center serves over 1,000 seniors on a monthly basis through programs, trips and other educational activities.

For the Rev. Cindy Jarvis, putting the undesignated bequest back into a community initiative was a simple decision to make.

“It’s part of a larger story of the church understanding that if you build it for yourself you’re going to die,” Cindy said, referring to the decision to use the donation to renovate space for a senior center. “If you build it for all of those people outside the doors, you’re giving life. The place where you see that day after day after day is the Center.”

The Center on the Hill holds roughly 25-30 classes per week in the renovated lower level of the church, with most of the classes occurring Monday through Friday from 9 a.m. to 4 p.m. There are a few select evening activities, a time that is shied away from due to seniors preferring not to travel at night. However, some night events do make it easier for a caregiver to also attend. (More information on the programs can be found through the Center’s newsletter here.)

Among the newest programs held at the Center on the Hill is the Memory Café, which provides an environment for people with dementia to socialize and be involved in engaging activities. The Center is fortunate to have received some funding for these cafés. This fall’s Memory Cafés are sponsored by the Chestnut Hill Hospital, and the 2017 cafés are generously funded by a grant from the Presbytery of Philadelphia and another small grant from the Chestnut Hill Community Fund. Memory Café events have a wide range of subjects. 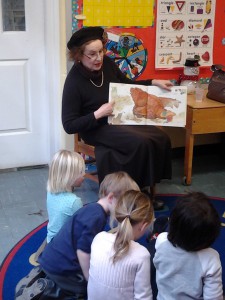 A senior reads to children at the Chestnut Hill Church’s preschool during an intergenerational Mother’s Day program.

“It’s more of a social gathering,” explained Leslie Lefer, the Center’s director. “Music is a way to reach people who have Alzheimer’s because it gets into the part of the brain that has old memories. We will have pet therapy at our Nov. 29 café. Comfort Caring Canines is going to come in to just to be with the seniors. So it’s not just presentations, it’s more social gatherings. And we have different activities so that the people with Dementia can participate and their caregivers.”

Guest speakers are also present from time to time, ranging from former Pennsylvania governor Ed Rendell to former Philadelphia Phillies broadcaster Chris Wheeler, who has been giving an annual recap of the baseball season in the fall for 25 years. Other programs focus on nutrition, senior crime prevention, history, yoga, meditation, folk dancing and even learning a new language.

“They really want to stay active in being mentally strong, physically strong and spiritually strong,” Leslie said of the seniors. “A big topic for seniors is de-cluttering. A lot of these people have lived in their homes for many, many years and now they know that they need to transition to another home but they feel overwhelmed because they don’t know how to get rid of their stuff.”

Seniors can also sign up to volunteer their time reading and interacting with the children in the church’s preschool, which is popular when the making of gingerbread houses is in season. There are also “Trips of the Month” at the Center, which in the fall included stops at Chanticleer Gardens and The Constitution Center.

“The challenge is always trying to find new programs that people will enjoy and want to come to,” said Leslie, who has seen the number of classes at the Center on the Hill double in the four years she’s been the director.

Many of the program topics have been suggested by the seniors themselves, like an introduction to computers, Zumba and driving classes. There are nominal fees associated with some of the classes and activities, but many of the programs are free. Through grants and donations, the Center on the Hill is self-sustaining. 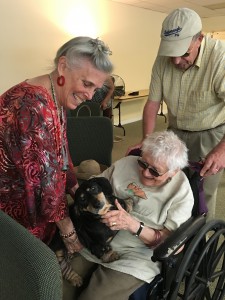 Pet therapy is popular at the Center on the Hill, especially at the Memory Cafés.

Art exhibits line the walls of the Chestnut Hill Church’s ground floor, a bowling alley space that was able to be renovated thanks to the second large monetary contribution. The initial $2 million donation eventually established a Director of Youth and Senior Adult Ministry at the Chestnut Hill Church as well as supported the Center director’s salary. It wasn’t until October of 2009 that the Center on the Hill opened its doors under the direction of Jackie Yorko.

“She had the vision for what it could be and really put that vision on the ground,” Cindy said of Jackie. “She also came with a lot of connections in the community. Jackie’s particular interest was in the field of health and wholeness. Leslie followed her as the builder and has broadened as well as grown the program.”

The renovation project that led to the Center on the Hill was not the first to take place at the Presbyterian Church of Chestnut Hill during Cindy’s 20 years of ministry there. The need for a new organ resulted in a major sanctuary renovation and the creation of a new gathering space that holds many community events.

“Each time we have renovated a space, it has just multiplied our ministry,” Cindy said. “Our sanctuary has become the venue in Philadelphia for choral music.”

This “growing” isn’t happening by accident, and Cindy and her congregation know that.

“We’re a church whose center is worship and faith, and God’s spirit is moving to always be doing a new thing with us,” Cindy said. “Somebody said to me one Sunday, ‘God doesn’t let us rest here, does he?’ God is giving us a very exciting future, and it’s just up to us to open our heads, our hearts, our imaginations and our pocketbooks sometimes and receive the future we’re being given.”