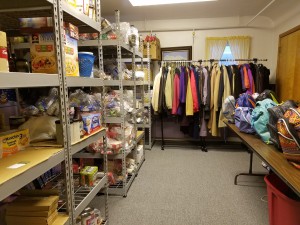 This is the view of the nursery room at Faith United Presbyterian Church in Pen Argyl, PA, which is filled with things likes coats and backpacks that will be distributed to area youth.

For the Rev. Ruth Ann Christopher, the information may not have been completely new, but it was still unsettling nonetheless. Listening to a report from Pennsylvania Youth Survey (PAYS), the pastor at Faith United Presbyterian Church in Pen Argyl in eastern Pennsylvania knew more had to be done to help provide for the youth in her community.

“PAYS identified the Slate Belt as an area where there is a food insecurity issue,” said Ruth Ann, who heard the report while sitting on the board for the Slate Belt Communities That Care committee. “Pen Argyl and Wind Gap ranked in the top 10 poorest in the entire Lehigh Valley. Pen Argyl (Area School District) has a 60-percent free lunch (percentage) and Bangor (Area School District) has an 80-percent free lunch.

“In this PAYS survey, kids (form Pen Argyl) were saying that they were sitting in class hungry, that they couldn’t concentrate on their school work because they were just so hungry. If you talk to anybody in education they’ll tell you that a hungry kid does not learn. So, if a hungry kid doesn’t perform well in school, they grow up without the education needed to escape the cycle of poverty that they are stuck in.”

While Bangor has programs in place to help distribute food to the youth in its school district, Pen Argyl does not have such resources available. The facts served as a calling to Ruth Ann and the Faith United congregation to create an initiative to help feed students in their community. And so Slate Belt Common Ground was born.

Slate Belt Common Ground is a ministry of the congregation that provides several services to the community, from a weekend take-home backpack food program to a Diaper Depot that provides clean diapers for newborns and toddlers. There’s also a Clothing Closet, Handyman Service and Hygiene Pantry available through Slate Belt Common Ground, which benefits from donated goods that are given from those within and outside of Faith United Church.

The donated goods are currently being housed in a small room in Faith United Church. A storefront has been leased to house Slate Belt Common Ground, but because it needs renovations it will not be available until the spring.

“We’re about meeting the need – that’s part of the reason for doing it,” Ruth Ann said. “The other part is that we know there is a spiritual need, particularly among the youth in the communities because they don’t come to churches. And yet, we know that they like to volunteer. We thought that if we get out into a storefront that’s not a ‘scary’ church and we can entice the millennial and gen-X types to come and volunteer some hours, we can make some connections with them that way.”

The space, an old hardware store that is located just a couple of blocks from the church building, is being leased for $1 per year. The property was found through a conversation in a barber shop by Common Ground co-founder Mark Newman, who is a pastor at a nearby Moravian church and also works at Moravian College. He was talking about the plans for Common Ground, and the owner of the property overheard him and offered up the vacant storefront for this community outreach.

“When you work with the Holy Spirit, it’s just a wild ride,” Ruth Ann said. “Out of just the strangest places, things just happen; they fall into place. People volunteer where you don’t even expect to have anything.

“It’s all in the will of God. God takes care of you. We’ve been living that. It’s our story. Where would you get rent for $1 a year?”

Among the plans for the new building would be for Bible studies and other Christian-centered learning to occur there.

“This is where the name ‘Common Ground’ comes from,” Ruth Ann continued. “People who receive the services and the people who provide the services all have spiritual need, and maybe that storefront becomes a common ground where everybody can talk to everybody else at the same place – where conversations about difficult subjects can happen.” 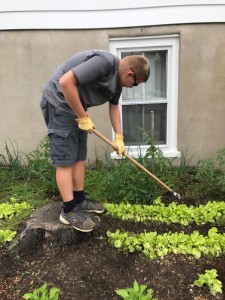 A youth helps maintain the community garden that is located on the property of Faith United Church.

In the meantime, Slate Belt Common Ground is utilizing what Faith United Church has to offer, which not only includes a room to store the food and other items that are being distributed but also a small plot of land that has been turned into a community garden.

“We’re a very small church, a struggling church, but we still find ways to make a difference to share what little we have with those who have even less,” Ruth Ann said.

Ruth Ann hopes that Common Ground will eventually catch on with the other local churches in the area. While there are individuals from Faith United and other congregations pitching in, none of the other churches have immediately stepped up to participate in the program. However, several non-profit organizations have helped fill the void, like supplying jelly for sandwiches that are included in the Backpack Buddies program.

The Pen Argyl Area School District has also played a large role in helping to distribute and gather the backpacks. The guidance counselor is not only the point person for the program, she also lets Common Ground know which children receiving the backpacks come from larger families so that any extra food and hygiene products can be packed and shared with their parents and siblings.

“The school district is very supportive,” Ruth Ann said. “You think school districts won’t work with churches but that’s really not true. They provide the courier service to come to the church to pick up the backpacks that are filled on Friday and then they come on Wednesday to return them. They recognize that there’s a need and they can do a better job if they help us meet this need.”

Ruth Ann hopes that Common Ground can partner with another organization to continue with a food distribution program during the summer months. It’s one of several questions that have yet to be answered, but ones that Ruth Ann knows will eventually come to fruition.

“We’ve been praying about it and wondering about it,” she said. “We’re going to trust that God is going to lead us to where we need to be with this to do what it is we need to do. God doesn’t want his children to be hungry, either.”