First Bloomsburg makes the most of its bicentennial anniversary 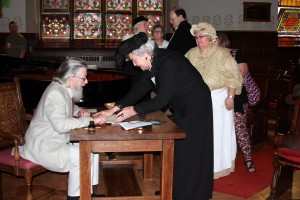 Dressed in clothing to look like its 1817, people at First Presbyterian Church of Bloomsburg approach the clerk of session to receive their communion tokens for the anniversary service. However, a couple of folks were too questionable of character to receive tokens.

A small scuffle occurred when a few people had to be removed from a pew at the First Presbyterian Church of Bloomsburg on Sunday morning, Sept. 17. Another person was bonked on the head during worship because he had dozed off. It was just your typical service in this central Pennsylvania community – if it was 1817.

The 19th century historical service was just one of many events planned by First Bloomsburg this year as part of its 200th anniversary celebration. Over a year of planning has gone into things like a talent show, hymn sing, history book, cookbook and video in honor of the church’s birthday. It will culminate with a special Bicentennial Weekend in early October that will consist of a catered dinner on Saturday followed by a special Sunday morning service that will include the return of several former pastors to the pulpit.

“The congregation has responded wonderfully,” said the Rev. Dr. Elizabeth McCormick. “They have been engaged and especially in the historic service they really had fun with it. We have seen some robust giving, which is a good indication that there has been some good energy created in what we’re doing to recognize the bicentennial.”

All year long several things are occurring to commemorate the anniversary. A rotating display of church history was set up in the Fellowship Hall to help people learn more about the congregation’s past. First Bloomsburg also decided to update its church pictorial directory, published a cookbook and created an anniversary banner. Seasoned Sounds, a community “big band” that rehearses at First Bloomsburg, also performed a concert for the congregation this year.

Another key piece to the bicentennial was the sharing of faith stories by church members on Sunday mornings, replacing that morning’s sermon. Others have shared their journeys in the church’s newsletter as well.

A sleeping parishioner gets a tap on the head by an usher to wake up during the anniversary celebration. The other side of the pole had a feather to wake the ladies.

During the weekend of Sept. 16-17, First Bloomsburg hosted the Presbytery of Northumberland meeting on Saturday, then held its historic 19th century service on Sunday. In an attempt to recreate a service from 1817, people wore period clothes as the Rev. D.J. Waller (played by William Baillie) gave the sermon. A pastor from Warrior Run Presbyterian Church, the Rev. John Bryson (played by the Rev. Paul Smith of Watsontown Presbyterian Church) also filled out the morning. A local costume shop helped some people with their “Sunday dress” and also displayed other outfits on mannequins throughout the church.

Since Sept. 17 was also the day the first synod meeting was held in the United States in 1717, Martha Manning provided a historical look back at the synod’s history from a 100-year perspective.

In keeping with the theme, communion was served on antique trays, and a person needed to have a communion token to participate. Each person was relegated to sitting in the pew in which they rented and were removed from that bench if they hadn’t paid for it. “Ticklers” and “bonkers” also helped keep people awake during the morning sermon. Appropriate food from the 19th century followed the service.

“We had many different ministry teams that just got together and put this whole celebration in such a marvelous way,” Elizabeth said. “It was a lot of fun. Members actually rose to the challenge. Some of them did get very dressed up.”

A second celebration will be held Oct. 7-8. On Sunday as part of the Bicentennial Weekend, the Rev. Dr. Blair Monie, who grew up at First Bloomsburg and who is currently a professor of pastoral ministry and leadership at Austin Presbyterian Theological Seminary in Texas, will deliver the sermon. Other pastors will also share the pulpit with Blair that day, and a special anthem written by William Baillie, one of the church’s choir members, will be performed that morning. 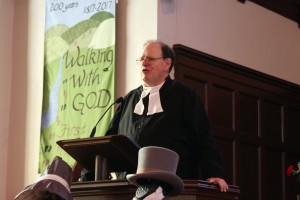 The day before, a special dinner will be held where a history video produced by Steve Cureton will be shown. The evening will also feature the launching of a bicentennial history book written by William Baillie and Brian Johnson and singing by the Bloomsburg University concert choir.

Moving forward, a hymn sing has been scheduled for November, and on the first Sunday in Advent the congregation will incorporate the new Presbyterian hymnal “Glory To God” as part of its celebration. A bicentennial hymn of the month with a description in the bulletin of how it relates to the church has been featured in worship services throughout the year as well. A “bicentennial moment” has been a fixture in monthly newsletters throughout 2017, too.

One constant has been the church’s music ministry, which is led by Director of Music Holly Lapinski and organist/pianist Harry Martenas. Concert choirs from nearby Bloomsburg and Wilkes universities hold annual performances at the church as well. But the congregation also has deeper roots in the community that haven’t gone unnoticed through the years. 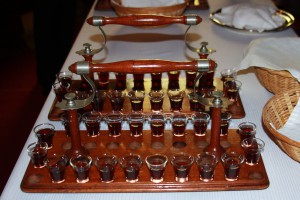 Historic communion trays were used during the anniversary service on Sept. 17.

“This congregation is known for their openness and outreach to the community,” Elizabeth said. “We have a community meal that various churches participate in. We are committed to the advocacy for openness and equality, and we have a very strong presence in a coalition for social equity that we have in our community. We are working very hard to address some of the systemic issues that are plaguing a lot of our communities around here.”

It’s all part of the mission of the church, which has been accurately summed up in the banner that is displayed on the front of the church: “Celebrating the past, serving in our present and anticipating our future.”

“God’s hand has been so evident in the commitment of the people to be faithful followers of Jesus,” Elizabeth said. “To go through a Civil War, two World Wars, a depression and to keep building and growing even during those very difficult times had to be tremendously hard and yet they rose to the challenge. And I know that this congregation has borne the fruits of that commitment and are likewise committed to moving this church forward in such a positive way.”