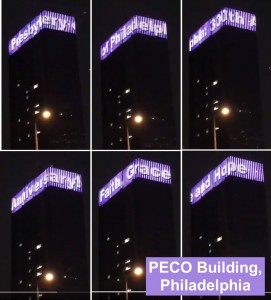 The PECO Building in Philadelphia helped the Presbytery of Philadelphia celebrate its 300th anniversary in early October. Click on the picture to see a video of the message.

Three hundred years is a long time. In that span the United States was born, wars have taken the lives of more than a million Americans, and a man walked on the moon. Yet through it all, despite the progress that has been made in human rights, medicine and inventions, there unfortunately are still plenty of similarities today to what was occurring in the early 18th century.

“When you think about what was going on in the early 1700s, you have aristocrats, landowners, indentured servants, enslaved and indigenous people who were on this land already,” said the Rev. Ruth F. Santana-Grace, the executive presbyter of the Presbytery of Philadelphia. “Somehow, 300 years later, we are yet again a people of different colors, shades, urban, suburban, rural, inner city, center city. We’re being pulled together only by the grace of God to create a faithful witness alongside the weaving together of the story of the nation.”

Reflecting on the past three centuries – and also looking ahead to what’s next – has been the focus of leadership of the presbytery in 2017 as it celebrates its tricentennial. Eight initiatives have been identified through an achieved $300,000 fundraising campaign, videos and a 300-day devotional have been created, and a massive worship service on Oct. 7 was held. They are all signature pieces of an anniversary celebration that aims to remember where the presbytery has been while also challenging its congregations to look to the future.

View the presbytery’s 300th anniversary video here that is also tailored for congregations to use for group discussions, confirmation and new member classes.

“By purposefully looking back at our founding,” said the Rev. Kevin Porter, presbytery stated clerk, “we recognized the challenges then were as daunting as now – if not more so – and the same God enabling them to establish this new church in a new land is faithful still. Moreover, we have a renewed appreciation of how we can do more through the covenant community of congregations we represent than any of us can do alone.”

The Presbytery of Philadelphia was organized in 1717 as part of a “makeover” of the Presbyterian Church that saw three other presbyteries also being named to create a synod. Prior to that, a “General Presbytery” that was formed in 1706 had encompassed an area on the East Coast that included one pastor from Philadelphia and six more who settled in Maryland, New Jersey and Delaware.

Those original meetings were a backdrop to what was held on Oct. 7 at Enon Tabernacle Baptist Church in Philadelphia. The 10 a.m. worship service included over 400 people participating in the choir and other parts of the worship. A celebration reception followed the gathering in which John Witherspoon made an appearance.

“We’re trying to weave in celebration in the context of the worship,” Ruth said.

After considering various venues and models for the worship celebration, the 300th Celebration Committee was committed to hosting the event inside the city of their birth. No congregation in the City of Philadelphia could hold more than 600 people. Lots of creative models were discussed including the Kimmel Center and a “two-venue” event. One was cost prohibitive and the other would diffuse the energy that comes from a people of faith gathering together. Enon Tabernacle Baptist Church was identified at a gathering with former presbytery moderators. Today they are grateful for the opportunity to be hosted by a sister denomination.

“Given the climate, given the needs of our city, given the climate of our nation, we know that the future of the gospel is really going to be intimately tied to our working across ecumenical partners,” Ruth said. “It feels like God really prompted us in a direction that we never really would have pursued on our own. It’s one of the largest African-American churches in the city as well, helping us bring a bridging and healing across the race divide that we have been working for in racial conversations for two years.”

The excitement around the worship service and the other work that is being done to celebrate the 300th anniversary of the Presbytery of Philadelphia has been more than the organizers could have hoped for.

“When I brought this up two years ago, I don’t think we were worried about numbers,” Ruth said. “We weren’t worried about the mission component, we were just convicted that we would try to gather as a presbytery to celebrate God’s faithfulness.”

“It’s all about how do we tell the narrative, how do we shape the story, whether it’s our church ministries, whether it’s mid council work or even our anniversary?” added the Rev. Greg Klimovitz, the presbytery’s associate presbyter. “I think if we were saying come gather and celebrate 300 years and it was done in such a way that this was a means of commemoration of an historical event and that alone, I don’t think we would have gotten any traction. But what we’ve been doing – (anniversary slogan) ‘Born in Faith, Rooted in Grace, Living into Hope’ – is reminding folks that the story that we’re a part of is their story but it’s not a closed story. It’s a reforming and unfolding story of God’s faithfulness that is shaping our present witness in the midst of a city and greater Philadelphia region that we continue to serve.” 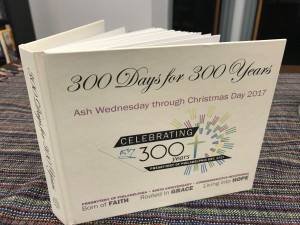 The presbytery created a 300-day devotional in honor of its 300th birthday celebration in 2017.

Specifically, there are eight initiatives that the presbytery chose to target during this anniversary year. They deal with at least one of three things that the presbytery feels are important to its city, namely children and education, interrupting the school-to-prison pipeline and restorative justice. A campaign asked congregations and individual donors to contribute to these efforts with the proceeds being distributed equally among all eight. The initiatives were selected by the 300th Celebration Committee after a selection process was identified. The initiatives are Broad Street Ministry, Chester Eastside Inc., The Common Place, Kirkwood Camp, Rearing Successful Sons, Restorative Justice and the Arts, Rhawnhurst Turning Point and West Kensington Ministry.

“What were the issues of the day when this presbytery was first founded?” Greg said, explaining why these eight initiatives were selected. “What is the unique issue of our day, of our time and place? What does it look like for the church to be on both the preventative side as well as on the restorative side of the issues of our day 300 years later?”

By highlighting these eight ministries, it allowed churches to become acquainted with them and bring them into their congregations. The goal was to raise $300,000 in honor of the 300-year celebration, and while it may have seemed like a lofty total to achieve, that figure was met.

Kevin added, “As we have identified the disruption of the school-to-prison pipeline as the focus of our successful $300,000 anniversary mission campaign, we have shown our community a concrete example of both our relevance to, and care for, our neighbors.”

As 2018 approaches, the presbytery is hoping that through this directive of supporting what are new initiatives for many congregations it will also renew their commitments to the ministries they already support. It’s also hoped that congregations will become acquainted with and partner with some new programs through this initiative.

It’s all part of a yearlong celebration that is honoring the past, relishing the present and turning its attention to the future in Philadelphia and the greater Philadelphia area.

“I’m grateful for the opportunity our anniversary provides us to raise awareness, for we are a diverse and engaged people of God to the community beyond our congregations,” Porter said. “Particularly at a time when so many factors would have us believe we need to divide into opposing camps, the 300th celebration bears witness to a Christian community that encourages its members to offer their unique gifts and perspectives in our shared call of building God’s kingdom.”

“We were very much a part of the thread that wove together the foundation of our nation – good, bad and indifferent,” Ruth said. “Today I believe that call is not different. If we live out our calls, it does transform the world in which we live. We believe that in the 1700s we were part of that storytelling, and we’re trying to reclaim that same kind of voice as a larger covenant community today.”