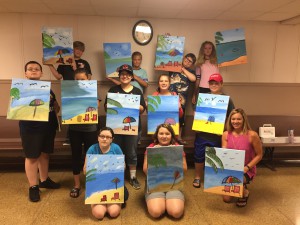 In many ways, it’s the middle schoolers who get lost in the shuffle, especially when it comes to religious activities. After all, the younger children have things like vacation Bible school and regular Sunday School tailored for their needs, and the high-school kids seem to have built up a strong bond among themselves by the time they reach that age.

Sensing that the middle schoolers in her community of Summit Hill, PA, needed something that would both entertain and educate them, the Rev. Kari Olson decided to organize a weeklong summer day camp centered around art and theater. Located at Kari’s Hope of Christ Presbyterian Church, the program was designed for children ages 12-16 and included volunteers from the church and surrounding area.

“They’ve aged out of VBS things but they aren’t old enough to be working, so there’s kind of a gap there in terms of what’s available for them,” Kari said of the middle schoolers. “I started looking at what gifts our community has and realized we had some energy around music and we have some visual-arts talented folk. Music ended up not being a part of it but it was part of the initial thinking process.”

The “Acts of Hope: Creative Arts Day Camp” fit perfectly into a church and community that has a passion for this type of ministry, something Kari first learned when she became pastor there two years ago.

“When I first got here I was asking people for the story about this congregation and Biblical stories that connect with them, and one of the Biblical stories someone offered was the building of the tabernacle in Exodus,” Kari said. “They really identified with this sense that we don’t really have a lot but we offer what we have. I was able to take that story and say, ‘This is what we’re doing here. We may not have a lot but what we do have are people with these types of gifts.’

“The other piece of that story is that God gives God’s spirit to the artists to make the tabernacle a beautiful place to worship God. We recognized that we had some artists and that God’s spirit has been given to them and works through them, so we want to use those gifts to serve our community.” 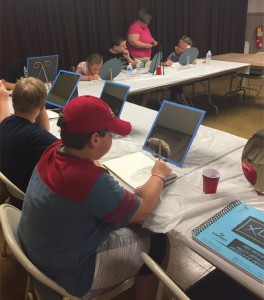 Camp day began with a visual arts activity like painting, sketching and sign-making. The campers also made ice candles and pictures created with pastel-colored chalk. After the local summer free lunch program provided food for the camp daily, the afternoon consisted of theater programming led by the Philadelphia-based Pig Iron School for Advanced Performance Training. It’s a group that also worked with adults one evening on a similar program that it used with the children earlier in the day.

“I got to talking with a friend of mine who lives down in Philadelphia whose husband is in theater school there,” Kari said. “He was really excited about the idea of doing something. They had come to visit me at Thanksgiving and Christmas and unbeknownst to me he had already been thinking, ‘This would be a really great town to come and do a theater program in.’

“The theater folks, their focus was on creating new original pieces – helping kids find their voice and tell their own stories and make up their own things rather than the traditional, technical theater stuff.”

Eleven children ended up participating in the first-year summer camp, with eight of them not being affiliated with Hope of Christ Church.

“It was great to branch out our reach into the community,” Kari said of the church, which does not hold vacation Bible school or even have a regular Sunday school program due to a lack of children.

Thanks to a $3,000 grant from the Lehigh Presbytery, three members of the theater school traveled north to Summit Hill and spent five days there working with the teenagers. Kari and two other families hosted the actors in their homes for the week to complete the experience, and most of the helpers with the morning art session were volunteers from the church, all of which helped Hope of Christ Church offer the program for free to the community.

“There was a nice balance of using the gifts of our local people and also bringing in people from outside to expose our kids to something they wouldn’t normally get around here,” Kari said. 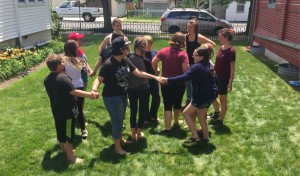 “One of the huge ways that I see God at work through (the arts camp) is building the confidence of our own people who are here already, helping them see that they can do something, they can serve their community,” Kari said. “It was really good for them to see that they can pull together, that God has given them gifts that they can use and they are able to serve their community. Building their confidence in their ability to do things – it’s huge and that will continue to serve them as they reach people through this program or through other things to build their confidence that we can try something new.”

Even though the Creative Arts Day Camp was held in a church building, it did not have a religious component to it. That was done by design, in part because it allows future camps to be considered for non-secular funding and grants.