Celebration reflects on past, challenges Presbytery of Philadelphia for its next 300 years 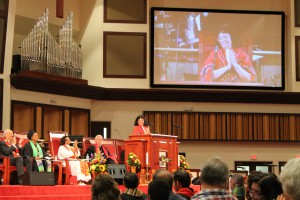 The President of Princeton Theological Seminary was there, and so was the co-moderator of the Presbyterian Church (U.S.A.)’s 222nd General Assembly. The mayor of Philadelphia also spoke, and a 265-year-old silver chalice was front and center during communion. Even John Witherspoon, the moderator of the first General Assembly and a signer of the Declaration of Independence, made an appearance.

A day of celebration in honor of the Presbytery of Philadelphia’s 300th birthday brought an estimated 1,500 Presbyterians to Enon Tabernacle Baptist Church in Philadelphia on Saturday, Oct. 7. Each of the presbytery’s 123 congregations were represented, and eight new ministry initiatives were highlighted as a culmination of a fundraising campaign that raised in excess of $335,000. And there was singing, from a 150-person celebration choir to a large Voices of Hope Youth Choir to a song titled “God’s Grace” that had lyrics adapted by soloist Carrie Lessene of Berean Presbyterian Church for the presbytery’s anniversary and lifted everyone onto their feet.

“We come from rural, suburban, center city, inner city, bound by a calling to be a people of light, a people of hope,” shared the Rev. Ruth F. Santana-Grace, the presbytery’s executive presbyter. “We are as diverse as our fore-parents, easily tempted to be divided by culture because of race, language, economic status and more. We are still wrestling. But on this day, we have chosen to join our voices as a way of renewing and reclaiming our identity, boldly claiming that our faith in Jesus Christ has something relevant to say to the world today because we are a people rooted in God’s grace.”

Read more about the fundraising and other initiatives created by the Presbytery of Philadelphia in honor of its 300th birthday here.

The presbytery’s 300th anniversary slogan – Born in Faith, Rooted in Grace, Living into Hope – was prevalent throughout the 2 ½-hour celebration service. In fact, the Rev. Dr. Craig Barnes’ sermon was titled “Rooted and Fruitful” as he drew an analogy between a blossoming tree and the challenge of a mid council body like the presbytery. 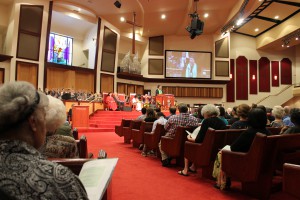 “We remember John’s vision in Revelation of a river that flows, a river of life and a tree that grows up out of it,” said the president of Princeton Theological Seminary. “And this tree has leaves for the healing of the nations. We remember that 300 years ago that tree grew a new branch called the Presbytery of Philadelphia, and its purpose was to have leaves for the healing of the nations. For 300 years it has served that calling to a nation that was torn apart by slavery, that ripped apart the soul of the nation and continues to struggle with racism, struggles with violence, struggles with economic depression, struggles with taking hope away from kids before they ever have a chance, and struggles with anybody who is different than us.

“Through the years, this presbytery has insisted on being a tree rooted in the grace of God. Even when the church struggles with itself and its own failures, we return to be rooted in the grace of God so that we might get back to being a part of the tree of Christ that always is committed to providing leaves for the healing of the nations. That’s our inheritance, that’s our tradition, that’s our story.”

Similarly, the Rev. Denise Anderson, co-moderator of the 2016 General Assembly, challenged those who had gathered to look to the future. She related it to a recent vacation with her family where the inevitable question arose, “Are we there yet?”

“One would think that after 300 years any group of people would have long ago arrived at their destination,” she said amidst laughter from the audience. “And yet the Presbytery of Philadelphia on this auspicious of occasions and on the commemoration of this milestone in your ministry, we are reminded that you are still very much on the journey.

Denise added that, like the child in the backseat of a car during a lengthy trip, the liturgical year is full of waiting. It can make even the most ardent of Christians become impatient. 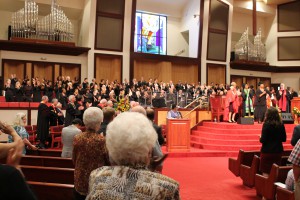 The song “God’s Grace,” led by Carrie Lessene of Berean Presbyterian Church brought everyone to their feet.

“No matter what your calling looks like in these next 300 years remember that you have been given everything you need to have to do what God is calling you to do.”

City of Philadelphia Mayor James Kenney credited the presbytery for helping to improve upon the many obstacles that are plaguing the region.

“For 300 years, your organization has provided for Philadelphians in need,” he said. “Your commitment to educating youth, helping our immigrants, providing food to the hungry has made our city stronger. Because of the work we’ve done to strengthen our communities, Philadelphia’s crime rates have dropped to the lowest they’ve been in 40 years.”

The Rev. Johnnie Monroe, the moderator for the Synod of the Trinity, also commended the presbytery and the congregations in it for the work they have done these past three centuries.

“You have a long history of ministering to God’s people who are scattered in rural areas, small towns, suburban areas and the inner city,” he said. “You have ministered to people of various races, various ethnicities and various ages. You have been able to do that because you’ve allowed God through his son Jesus Christ to lead you. You have been able to survive 300 years because of your faith in Christ.

“I invite you to look back with pride. But you must look forward with a determination to be God’s light in a dark world. For God leads the church, God leads Philadelphia Presbytery today as never before.” 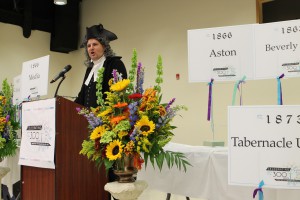 John Witherspoon addressed those who had assembled during a reception following the celebration service.

The Rev. Jerry Van Marter, interim communications director for the Office of the General Assembly (PCUSA), read a statement on behalf of the Rev. J. Herbert Nelson, the PCUSA’s stated clerk, that congratulated the presbytery’s six-figure fundraising efforts.

“We give thanks that those ministers and elders who organized the Presbytery of Philadelphia in 1717 set the course for ordered Presbyterian ministry in the United States of America and it endures to this day,” said Jerry, reading from a statement. “We give thanks that the Presbytery of Philadelphia continues to live out the gospel of Jesus Christ in new and creative ways. We commend to all of our Presbyterian sisters and brothers your ambitious campaign to raise $300,000 for life-transforming ministries in this presbytery. We pray with you for the campaign’s success.”

By sharing its anniversary celebration in a non-Presbyterian sanctuary, it showed the importance of everyone working together – regardless of their denomination – to achieve things that are necessary for the betterment of the region, and the world. It’s a common goal for the next 300 years.

“We are a people affirming our call to live into the hope of God’s future,” Ruth said. “And hope is happening in this place today. We are sending a signal that we understand that as we lean and live into the hope of our future our witness will be humbly tied to the witness of our brothers and sisters of other denominations as well as our relationships with people of other faiths, working together to be a transformational people in the city and throughout the presbytery.”