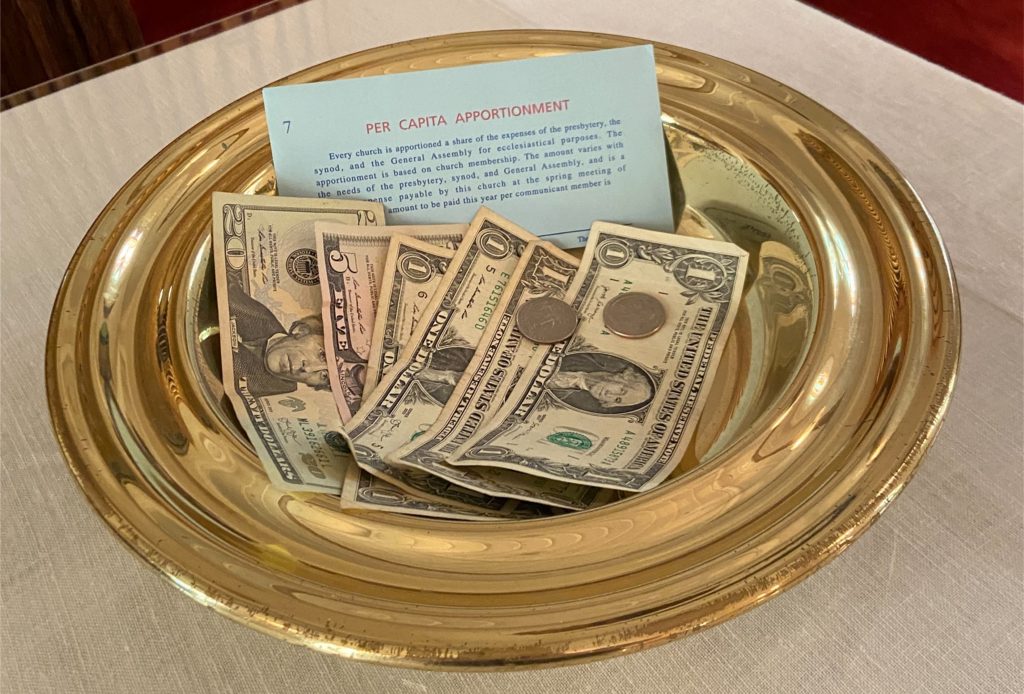 The First Presbyterian Church of Wheeling, WV, has per capita offering envelopes to help worshipers with their annual giving, which in 2021 is $29.50 per person.

Eight cents a day. It doesn’t sound like much, but when that figure is multiplied by 100 or so people, it can end up being a sizable amount for a church to pay, especially for those congregations that are already cash strapped.

Eight cents a day, which translates to $29.50 per person for the year, is what the per capita rate is in 2021 for churches in Upper Ohio Valley Presbytery. Per capita funds are given to the larger church out of the regular contributions of church members. The money supports the mid council bodies in the Presbyterian Church (U.S.A.), with $8.98 designated for the denomination headquarters in Louisville and another $2.40 going to the Synod of the Trinity. The remaining $18.12 stays in Upper Ohio Valley Presbytery where the funds help cover everything from missions and training to office staff salaries.

Churches send in their per capita contributions to their presbytery, which in turn sends out the monies to the denomination and synod. But not every church participates in this giving platform, for one reason or another.

“There are a number of churches that don’t have a connection to the presbytery or the larger church,” explained the Rev. Mike O’Neil, who serves the First Presbyterian Church of Wheeling, WV. “They don’t give per capita because they don’t feel it is important. Many churches have members officially on the rolls who haven’t been active and contributing members for years but because they are listed officially as active members that increases the amount of dues owed for per capita.”

Some congregations might only send in enough to cover the presbytery amount, putting presbyteries in a bind when it comes to sending out denominational and synod per capita. Some presbyteries will only forward what they receive while others will find a way to pay their full per capita whether they receive it or not.

In Upper Ohio Valley, only about 60 percent of per capita is received on an annual basis.

“For me, as a Presbyterian, I believe we are a connectional church,” Mike continued. “The reality is, almost anything we do as a church has a financial expense. Paying per capita allows us to do the things that keep the engine running. I may not agree with everything that happens at the presbytery level, synod or denomination, but that doesn’t change my relationship with the larger church.”

This is where the First Presbyterian Church of Wheeling, WV, comes in. This congregation, which is located in Upper Ohio Valley Presbytery, has agreed to match per capita giving of other churches in their region in 2021, but only those who increase their per capita or ones that haven’t been paying their per capita but will contribute this year. First Church of Wheeling is prepared to match up to $10,000 for contributions made through the end of November.

“I and the session are trying to increase our overall missional giving as part of our budget,” Mike explained. “We identified the presbytery as having a need to generate more revenue to do its work better.

“Our hope is that we’ll match the whole $10,000. What we chose to do as a session is give until Dec. 1 as a time frame, that way if there’s a balance left, we can use those funds in another area. We will spend $10,000 towards increased mission this year. How much of that goes to the presbytery beyond our per capita is up to the presbytery’s response.”

As of July 1, two churches have accepted the challenge and sent in per capita giving dollars, money they hadn’t forwarded to the presbytery in previous years. The total of the two is more than $3,200 and it will be matched by the First Church of Wheeling.

“We look at it no matter what happens as a win-win for everyone,” said Connie Quinn, the treasurer at Upper Ohio Valley Presbytery. “Mike is hoping that this catches on and that this is something his session might do going forward.” 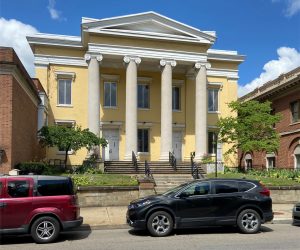 The First Presbyterian Church of Wheeling is doing its part to help churches in Upper Ohio Valley Presbytery increase their per capita giving.

Depending on how many churches accept this per capita challenge, First Church of Wheeling may opt to do another matching program in 2022. But the overall goal of the mission is to connect churches with their mid councils.

“In our whole nation, we have a lot of churches that are quasi-congregationalists and they don’t really think beyond what’s going on in their communities,” Mike stated. “Some of these churches have not been connected to the larger church in years. For a church that has an axe to grind or an issue with the denomination or the presbytery, a matching grant is not going to spur them at all. But if we can go from 60 to 75 percent per capita, that’s a good thing. For some churches, if they just match their worship attendance rather than their on-the-books membership, that will still be progress.”

While there may be a special per capita envelope in the giving boxes that are handed out at the beginning of each year, per capita is not something that is widely stressed by congregations. So, there may be a bit of an unknown quality to this annual giving element.

“Paying per capita is a strange concept for people,” Mike said. “I try to think of it as our share of the expense per person. The other thing for me is that it goes back to the idea that per capita should be a minimum and we should be exceeding the per capita. Frankly, it’s not that much money.

These shortcomings and unknowns continue to lead to per capita shortages across the denomination, which is why First Church of Wheeling is doing its part to raise awareness for this situation. It’s also part of being a Presbyterian and a Christian, if you ask that church’s pastor.

“It’s a trust in God to move hearts – or move wallets,” Mike concluded. “It is reliant on many people helping to promote it (the per capita match) and explain it, but in the end it’s God’s work. God’s the one who moves hearts. God’s the one who opens wallets. We’re trusting that God will inspire people to give more and see the benefits of their giving. My hope is that people in church will feel a bit more connected to the Presbyterian Church in its different formats.”