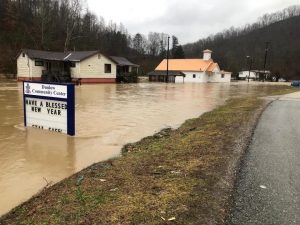 Massive flooding in Dunlow, WV, in the late winter of 2021 left many of its residents without necessary resources. Cabwaylingo Presbyterian Chapel stepped up to help distribute everything from money to refrigerators.

Bill Likens has spent the majority of his life in the Dunlow, WV, area of Wayne County. He knows the people, the traditions and the culture of this very rural area that sits as the westernmost county in the state. That’s what makes him the perfect person to lead Cabwaylingo Presbyterian Chapel, which he has done as the chapel’s outreach director for the last 19 years.

“The Chapel has been here since the ’50s,” Bill explained. “It’s an outreach of the First Presbyterian Church in Huntington. I’ll cover the service for the eight or 10 elderly people that come to the Chapel as needed. We’re focused on the outreach.”

During his time in Wayne County, Bill has seen the area lose its once-booming coal mine and timber businesses, resulting in many of its residents moving out of the area to find other jobs. What remains is an economically challenged region that struggles to stay afloat, and if a hardship of any kind comes its way, it can have devastating ramifications.

Unfortunately, that’s exactly what happened in the late winter of 2021 when an ice storm in mid-February was followed by massive flooding two weeks later, affecting a large portion of the residents in Dunlow. Needing someone to step up, Cabwaylingo Chapel [which gets its name from the four surrounding counties of (Cab)el, (Way)ne, (Lin)coln and Min(go)] did just that, providing food, water and other resources to the community.

“They lost pretty much everything,” Bill said. “No one has insurance. They all live on the land. A lot of them live in mobile homes that are not suitable for living anyway.”

In mid-February, back-to-back ice storms left the area without power for several days and took down many trees. Two weeks later as cleanup and repairs were still being made, five inches of rain fell in a 48-hour span, causing massive flooding in an area where the terrain consists of steep, narrow valleys in the foothills of the Appalachian Mountains that cause water to flow directly into Dunlow.

“Usually, an inch or two of rain in that time frame would put the water in the road,” Bill explained. “Five inches was the highest it had ever been according to everyone’s memory. The little creek that runs through here went from a foot and a half deep to 20 feet deep or more. The hills are so steep that when you get that much water at once it all runs off and just overwhelms it.” 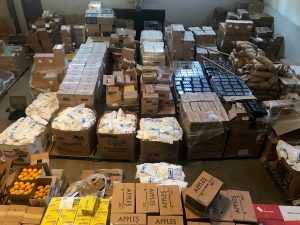 Dunlow Community Center receives truckloads of food and supplies that it distributes on a regular basis to people as far as 45 miles away.

Cabwaylingo Chapel immediately was turned into an emergency shelter following both storms, with 20-25 people using it as a place of residency for several days until they could return to their homes or find somewhere else to live. All told, 110 houses in Dunlow had water inside the living part of their homes. The Chapel also helped distribute $30,000 in immediate aid to those in need from ministry partners around the country, including the Synod of the Trinity and Presbytery of West Virginia. The Federal Emergency Management Agency (FEMA) used the Chapel when they arrived several weeks later as a central location to connect with those who were affected to discuss the residents’ long-term needs.

“FEMA took two months to get here,” Bill said. “FEMA did not want – because of covid – to come in person to meet with anyone. We were helpful to fill out applications. Within a week we were buying plywood to replace their floors. We got shipments of furniture. I can confidently say that we replaced everybody’s furniture that was flooded.

“Two Baptist churches were in the area. They both got flooded out. It was awesome to see how God stepped up, not only with the financial but he also sent groups to help muck out. It didn’t matter what denomination it was. We helped them replace flooring in their churches that they weren’t able to otherwise.”

Helping those in need is nothing new at Cabwaylingo Chapel. On its property is the Dunlow Community Center, which has grown into the largest food pantry in West Virginia. There is a monthly food giveaway on the fourth Thursday of the month, but full tractor trailers will also regularly bring food to Dunlow, and when that happens the distribution dates can occur weekly, which has been the case since early in 2020.

“We gave out close to 4 million pounds of food last year,” Bill said. “They say a pound is five meals, so that means we give out close to 20 million meals per year. I have people that come from 45 miles away in every direction and they line up starting the night before our food distribution days. In November we gave out to 920 families.”

The Community Center uses Facebook and phone trees to communicate with residents when food is available. Everyone from Presbyterian churches and Catholic groups to as far away as a solar power company in Arizona do their part to help fund these food drives.

“We get direct ships from the manufacturers and through other charitable organizations like World Vision,” Bill continued. “They send us food by the tractor-trailer loads. These organizations all want to be able to send it in one load. If a smaller pantry can only take a couple pallets but we can take a 53-foot tractor trailer, they’d rather send them to us.”

As a homegrown guy, seeing all the good that the Chapel and Community Center in Dunlow provides is a good feeling for Bill.

“I am from this community. I am a product of the Chapel from back in the ’80s,” he said. “I grew up here and received food and assistance from the Chapel at the time. I get told quite a bit that they don’t know what they would have done without (the Chapel) here.” 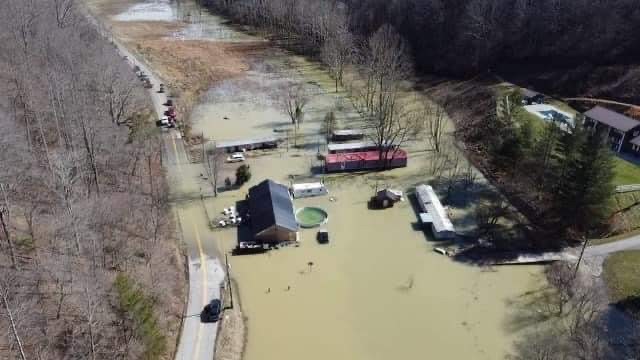 A storm that dropped five inches of rain in a 48-hour period left 110 homes in Dunlow with water damage in the late winter of 2021.