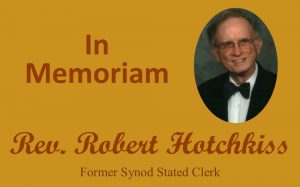 For 65 years, the Rev. Robert “Bob” Hotchkiss did everything in his power to make the Presbyterian Church stronger and better. Whether it was providing extra pastoral care at Market Square Presbyterian Church in Harrisburg, PA, or pushing co-workers at the Synod of the Trinity to become better acquainted with the latest technology, Bob was always willing to go the extra mile for something he devoted most of his life to.

“His passion was for church,” said the Rev. Bruce Stevens, a former executive of the Synod. “There is not a bit of doubt in my mind that he was looking for something to do to serve the church absolutely as long as he could physically do it because he really did love the church.”

A former stated clerk of the Synod and longtime pastor at Boulevard Presbyterian Church in Philadelphia, Bob passed away Aug. 21. He was 89.

Bob served as chaplain in the United States Army Reserve for nearly 20 years, holding the rank of major. His first call was in Claysville, PA, where he served two churches, followed by 28 years at the Boulevard Church. After retirement, he and his wife, Dottie, attended Market Square Church and quickly became part of the fabric there.

“Bob never stopped being a pastor and supported the ministry of the church and its installed pastors in any way we asked,” said the Rev. Thomas Sweet. “Designated as our ‘parish associate,’ Bob worked alongside (Pastor Emeritus) Jim Brown and, later, me to provide extra and additional pastoral care to the congregation. He usually did so on Mondays, our pastors’ day off, so that he became known among us as ‘Monday Bob.’”

His presence at Market Square will certainly be missed, especially when the holidays roll around this winter.

“During my tenure at Market Square,” Tom said, “I asked Bob every Christmas Eve to read the Luke 2 Christmas gospel. And every year I wept at his reading of it, knowing as he read how deep was his faith in God, so that when he finished, indeed it was Christmas.”

From 1991-2000, Bob served as the stated clerk for the Synod and later was a Synod commissioner from the Presbytery of Carlisle from 2013-15.

Bob was described as a “house nerd” by those who knew him, always searching for the latest in technology as computers were making their way into offices and homes in the 1990s.

“Bob was the go-to guy to figure out what kind of technology we needed and to keep that technology working,” Bruce recalled. “He really did have a pretty good understanding of the technology in the ’90s. He helped those of us who were not quite so technologically proficient. He raised the bar for us. He was the guy we always turned to. He really pushed us into using computers more than we would have at that point.”

A love for technology was just part of Bob’s unique personality that set him apart in a crowd.

“Bob was smart, never in a showy way, but always he was an astute contributor to our theological, historical and scriptural conversations in our Adult Forums,” Tom said. “And he, possessor of the driest of wits, usually made us laugh in the process.”

Bob was a graduate of the University of Pennsylvania where he earned a B.A. with honors in Arts and Sciences, an M.A. in Religious Thought (Christian Origins) and was elected a member of Phi Beta Kappa. He continued to earn both a Master of Divinity and a Th.M. in Biblical Studies at the Pittsburgh-Xenia Theological Seminary.

Services will be at a future date and held at Market Square Church. In lieu of flowers, donations can be made in his name to the Market Square Presbyterian Church Memorial Fund.

“We shall miss Bob a lot,” Tom concluded, “but we say to him with deep affection, ‘Go with God, Bob. Go with God with our love.’”

The Synod of the Trinity is thankful for Bob’s work and service to the region and sends condolences to his family and friends.