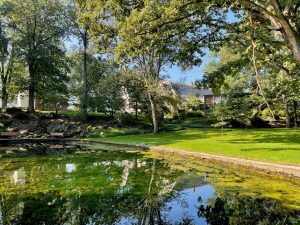 A reflection pond of Donegal Springs is in the foreground of the property that houses Donegal Presbyterian Church, which is celebrating its 300th anniversary in 2021.

When the Donegal Presbyterian Church was formed is open for some debate, but what’s not up for question is the dedication and commitment the congregation has had during the past three centuries. These qualities will be a backdrop for the congregation’s 300th anniversary celebration that is spanning two years.

The church in south-central Pennsylvania has established 1721 as the year of its founding, as that is when a group of worshipers approached Newcastle Presbytery to petition for an installed pastor. According to “An Authentic History of Donegal Presbyterian Church,” which was published in 1902, the roots of the congregation date back to as early as 1714.

Donegal Church originally planned events for 2020 and 2021 to celebrate its tricentennial, with the thought being that the events would lead up to a crescendo on Pentecost this year when a homecoming service was planned. However, the coronavirus pandemic forced the postponement and cancelation of the gatherings in 2020, so the homecoming service was shifted to Sept. 26, 2021, with other events now planned into 2022.

“There were living history events planned and concerts,” said the Rev. Matt Randolph. “Everything was supposed to culminate on Pentecost 2021. We had to cancel or reschedule pretty much everything.”

Despite all the reshuffling that has had to be done, those involved in the planning of the 300th anniversary celebration events have maintained their positive attitudes.

“They have been frustrated but resilient,” Matt said of the organizers. “Obviously they were frustrated but understanding. They wanted to do the right thing. They were disappointed that this was happening during this special time in the history of the church, but they didn’t stop working. They said, ‘What can we do?’ They kept looking forward and trying to be as patient as possible.

“The Project 300 Committee has been working for five years to plan all of this. The most important thing for them is worship. One is the homecoming service on Sept. 26.”

Among the notable elements of the homecoming service will be greetings from the Presbyterian Church (U.S.A.), Synod of the Trinity and Presbytery of Donegal as well as a recorded message from Donegal’s sister church in Northern Ireland. A vespers service on Oct. 16 is also planned that will focus on the history of the church with a Celtic flair. Two concerts are scheduled as well for December and April that will allow the congregation to showcase its love for the arts.

“Donegal is so musically rich,” Matt said. “The musical talent of this congregation blows my mind. We’ll have a very specific concert here showcasing our own musical abilities.” 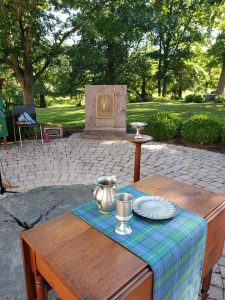 A memorial to the “witness tree,” which church members circled in 1777 prior to heading off to fight in the Revolutionary War, is just one treasure on the Donegal Church property.

Overcoming obstacles is nothing new for the Donegal Church. Its existence has overlapped many important American historical landmarks. One of them is the Revolutionary War of the late 1700s, and this thriving church in Lancaster County played an important role in helping to keep the British at bay. As legend has it, regiments of the British Army led by Lord Howe were moving in to invade Pennsylvania in 1777 in what would be known as the Battle of Brandywine. One Sunday, an express rider on horseback, knowing that the Donegal Church would have a large gathering for its all-day service and would have the manpower to help stave off this attack, arrived with the news of the invasion.

“A vast majority of the population would have been congregated here on a Sunday morning,” Matt said. “The rider came and informed the congregation that Lord Howe was marching on Philadelphia, and they were calling on the militia to stand in its way. They all filed out of the church, including the Rev. Colin McFarquhar, who prayed for the British crown every day according to legend.

“They held hands around a giant white oak tree and pledged their allegiance to the new colonial government. Then they went off and fought at the Battle of Brandywine.”

That tree, known as “the witness tree,” stood on the church grounds for more than 300 years before it had to be taken down in the early 1990s. There is now a bronze memorial at the spot where the mighty oak stood, and near it is a tree that was grown by a church member who used an acorn from the original tree to start a sibling. The wood from the original tree was used to create things like offering plates and bowls that are used at the church, as well as a large chair made from the trunk that is housed at the Lancaster County Convention Center.

Another constant reminder of days gone by is the sanctuary at Donegal Church, which dates back to 1740. The original log building was disassembled after the completion of the sanctuary and was located within the current cemetery grounds. Adding to the décor in the sanctuary are the pews, which were made from repurposed shutters. A church manse that has been turned into a “study house” that was built in 1810 is also on the property, along with an early schoolhouse that is now primarily used by a local boy scout troop.

The official membership at Donegal Church is more than 200, with roughly half of that number attending on an average Sunday morning prior to the recent pandemic. Matt added that the church’s online viewership can reach close to 80 views at times. There was a numbers crunch at start of the 20th century at Donegal when churches started springing up in towns, making it easier for worshipers to stay closer to home on Sunday mornings instead of making the longer ride to the more rural out-of-the-way churches like Donegal. But like many other trends and occurrences in its history, Donegal was able to overcome that to stay afloat.

“We weathered the storm in that regard, and I think we’re a pretty healthy congregation,” Matt said. “Covid has been quite a challenge, but the people have been very faithful. We have a lot of members who are still active throughout all of it, whether it’s online or in-person.”

Resiliency has been a key trait in the members and leadership who have been part of the Donegal Presbyterian Church for the past 300 years, so it’s no surprise that this quality has again shown through during this unique time of the coronavirus pandemic when an anniversary celebration was being planned. It’s all part of the fabric of this congregation that has weathered many storms and each time came through it stronger.

“This church has faced trials throughout its entire history,” Matt said. “Whether it was something like the American Revolution or all of the different splits and schisms that churches face for different reasons to our modern times with this pandemic and the politics that get wrapped into it, God’s hand is at work in this congregation because they do a phenomenal job looking at what truly unites them, and that is the faith of Jesus Christ given to them by God’s grace. They let that be the platform for how they worship and be together as a family in thanksgiving.

“There is a swath of stuff that can separate any of us for any reason and this congregation does a phenomenal job at checking all of that baggage at the door and focusing on being a family of God in that faith of Christ.” 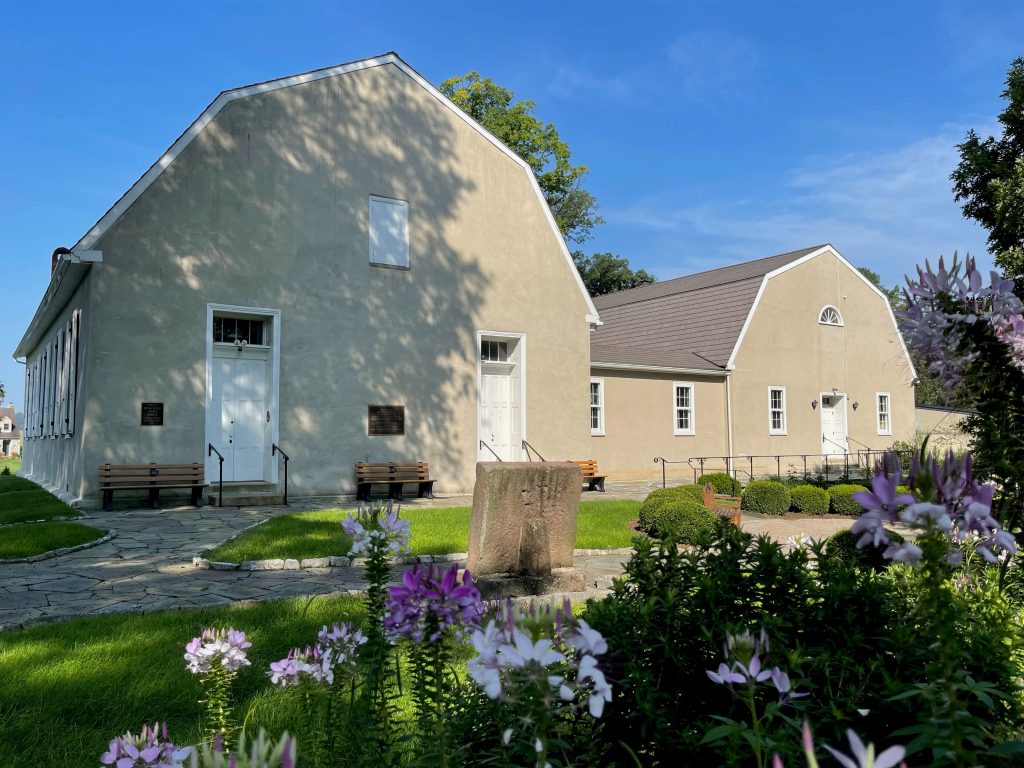 The sanctuary at Donegal Presbyterian Church is located in this building that was constructed in 1740. The portion to the right was added on in 1955 as an education wing.