If someone asks the Rev. Jason Elliott what has been the key to the success of the First Westminster Presbyterian Church in Steubenville, Ohio, during the last decade, he has a simple answer. 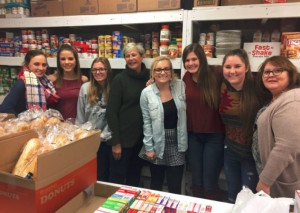 Volunteers are a huge part of First Westminster Presbyterian Church’s help with the Cancer Dietary Initiative, which serves 90 families each month.

And show up they have. When Jason arrived at First Westminster in 2008, the average Sunday attendance was 20 people. Now, there are 250 worshipers walking through the door every week, many of whom have become engaged in the community outreach programs that the church has entered into.

Among the missions that First Westminster have become involved with are a Cancer Dietary Initiative that provides food and meals to families who are stricken by cancer, a garden that produces fruits and vegetables for the community at no cost to the residents, and a Youth Works program that brings in roughly 600 teenagers during the summer for weekly mission work in the Steubenville area.

The Cancer Dietary Initiative is part of the local Tony Teramana Cancer Center and hands out food each month to 90 families affected by cancer. First Westminster’s food pantry is responsible for the outreach to the patients and loved ones, who must sign up for the donation at the cancer center in order to have tailor-made food items available to them.

It’s a dire need for some patients who have admitted that they were choosing between eating, paying household bills or paying medical bills. The added costs associated with their diagnosis caused people who are normally independent to struggle to stay above water, thus relying on the First Westminster food pantry to supply them with meals. The food for the pantry is donated by local grocery stores and packaged by volunteers at the church.

“It’s a labor of love from the whole community,” Jason said. “We have kids from the local high schools and community kids organizations from grade schools that will pack the boxes or deliver the boxes (to cars in the parking lot).” 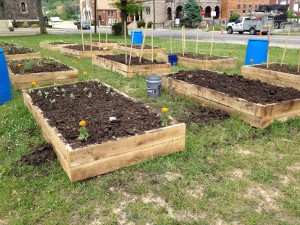 A community garden in Steubenville, Ohio, has 40 beds that grow produce that local people are free to help themselves to.

Occurring the third Saturday of every month, First Westminster Church also prepares a lunch on this same day so that those who are picking up food at the pantry can also sit down for a warm meal. If a patient isn’t up to staying for the lunch, to-go meals are packaged for them.

“The church parking lot almost looks like a NASCAR infield, a pit stop,” Jason said. “While the food is being loaded into the cars, some families will hold on the perishable items and come in for a meal that we cook for not only the Cancer Dietary Initiative patients and those receiving help but anyone in the community and the volunteers. It’s a celebration of community and ties back into having table fellowship in Acts 2:42.”

The church has had a food pantry for years, but it was only used in emergency situations because a local, bigger food bank attracted most of the customers. When the church heard five years ago that the food pantry at the cancer center was overflowing, it offered its space to the center. It’s an outreach that has proven to be a perfect fit.

“One of the frustrations we have is trying to verify targets of families who were in need and how you help them without hurting them,” Jason said. “This is like verified targets who are walking in with cancer and it is such a holistic approach that is so rewarding. It’s not only the mind and the body but also the spirit. It’s really unique in that sense.”

Food is also the main component of another outreach at First Westminster Church. A community garden that is located on a vacant Steubenville City School District lot houses 40 beds (4 feet by 8 feet) that grow produce that can be picked and taken home by anyone in the area. The garden is a collaborative effort between First Westminster, other churches in the area and the local fire department, with First Westminster taking the lead for the program since its inception five years also.

“It brings a different perspective to community outreach,” Jason said. “You have people who love to garden who may not have become involved in any type of community mission, outreach or relationship building. The garden becomes a nice, neutral turf where you have your hands in the dirt and a spade in your hand. Then all of a sudden people are coming into the community garden and relationships are planted and bloom.” 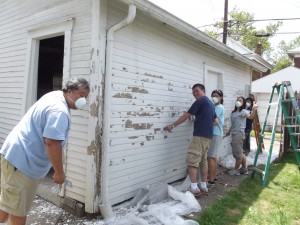 A chaperone playfully shows his exhaustion as other workers prepare a structure to be painted during a Youth Works program that brings 600 youth to First Westminster Church each summer.

The local school district is also an integral part of the Youth Works initiative that First Westminster has been a part of for the last 11 summers. For eight weeks from the second week in June to the beginning of August, groups of youth numbering between 70-80 participants descend on First Westminster for painting, yard cleanup and other work throughout the community. The Steubenville City Schools donate their facilities to the Youth Works program so that the volunteers can shower following their day of work.

Some volunteers for the youth mission trips, which travel from as far away as Texas, Minnesota and Maine, also prepare a vacation Bible school program during the time that they are in Steubenville, meaning that there is VBS for eight straight weeks at First Westminster.

“It’s been a great, great community builder for our city to bring different organizations and people together to really focus on a common goal,” Jason said. “The church is very much a part of it, but we want to remain in the background to just build Kingdom and do Kingdom work. It’s amazing to see what God does when he brings people together. And it doesn’t matter who is receiving the credit; it’s just the Lord that gets the credit.”