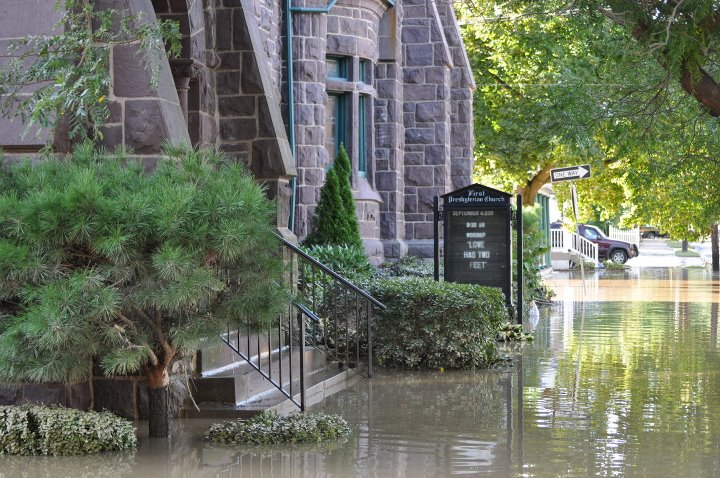 In 2011, Tropical Storm Lee dropped a foot of rain in just two days in eastern Pennsylvania. In the Luzerne County town of West Pittston, the result was massive flooding that affected more than 800 homes and another 26 businesses. One of those buildings that could not escape the devastation was the First United Presbyterian Church of West Pittston, which had water halfway up the back of the pews in the sanctuary and left refrigerators floating in the basement. Cleanup was attempted as the congregation was displaced, but the quick-developing mold and other effects of the high waters were too much for the church building to overcome.

“It was devastating,” said Marge Zeigler, the Congregational Life chair at the West Pittston church, recalling the flood. “For the longest time we thought we could rebuild it, but it just became obvious that we couldn’t afford it anyway.”

Right after the flood, the West Pittston Presbyterians worshipped at nearby St. Cecilia’s Catholic Church in Exeter, using that facility to hold their own service on Sunday mornings. Once the West Pittston group realized their flood-torn building couldn’t be salvaged, the congregation entered into a shared-space agreement in 2015 with Wyoming Church, holding separate services and activities there. Agreeing to attend each other’s events, the two congregations quickly became close friends, and the two are now looking into a merger. It has been a perfect situation. 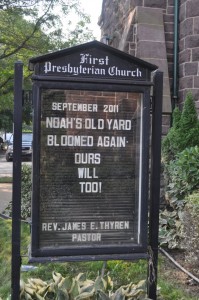 “They were a really tiny congregation, but they had all of this space, and we were a bigger congregation, but we had no space,” Marge said, adding that Wyoming has 32 members and West Pittston has 175. “It’s a perfect match. They’re trilled that everything’s being used, and we’re delighted to have some place to use.”

Part of the property that belongs to the Wyoming Church includes a separate building called “The Institute,” which was originally a feeder seminary school for Princeton Theological Seminary but only lasted for a couple decades. With the new group of West Pittston Presbyterians moving onto the lot, they decided to re-open this building. Complete with a kitchen and meeting space, “The Institute” is now also home to the church’s pastor’s office. Needing improvements like a handicap accessible ramp, computer, printer and a refrigerator, a Synod of the Trinity Innovation Grant helped with those upgrades.

It’s all part of trying to get the church involved in the community, and vice versa. With that the goal, an in-home Bible study group recently read and discussed “Don’t Invite Them to Church: Moving from a Come-and-See to a Go-and-Be Church” by Karen Wilk.

“The premise is that you do things that are easy to invite people to, you do things that people might want to come to,” Marge said. “There might be a resistance to just say, ‘Come to church with me.’ You find a way around that. Then what we had to convince everyone is that if the idea is that if we’re not inviting people to church and we have to invite people to other things, then we have to start some other things.” 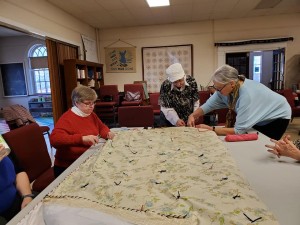 Members of the congregation make “ugly quilts” for the homeless. They are made with drab colors so that they won’t look attractive to others and become stolen.

Using MissionInsite, which is a demographic program that assists congregations in learning about their neighborhoods and mission fields, the Wyoming church brought in speakers to discuss topics that were relevant to the community. Among the topics were housing and aging, and they also hosted a health fair for people over 50, did a financial planning seminar and coordinated an “ugly quilt” outreach that consisted of sheets and blankets being sewn into sleeping bags for the homeless.

The “Tutoring Table” might be the congregation’s most popular outreach. It includes dinner twice a month followed by tutoring by teachers and high-school students who work with elementary-aged children on math and reading. A food room and clothing closet are also available to those who attend in case they need assistance beyond tutoring.

Also a part of the program is teaching the parents of the students how to do the math so they can assist their children at home as well as assisting the parents in checking their students’ online records and applying for clearances. Parents were also shown how to fill out applications for their children to go to Camp Lackawanna, and the church helps cover part of the cost for the camp.

It’s been a remarkable turnaround for a congregation that less than 10 years ago lost its building to a flood, didn’t have a place to truly call home until recently but is persevering despite these obstacles.

“God really nudged us to keep going,” Marge said. “God has really been patient with us, and God has consistently pushed us so that we can actually do the things we dreamed we could, that we can be a community church. We just made that decision that it was the only way to survive.” 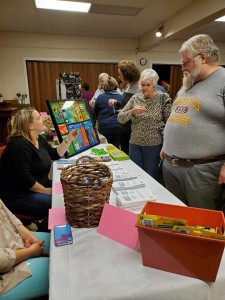 A Healthy Aging Fair is part of the community outreach that is occurring at the Presbyterian Churches of West Pittston and Wyoming. 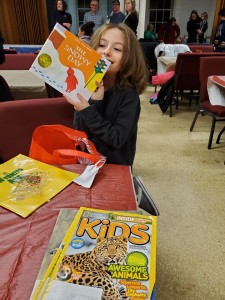 The Tutoring Table attracts both elementary-school aged children and their parents.