by the Rev. Christine Kass 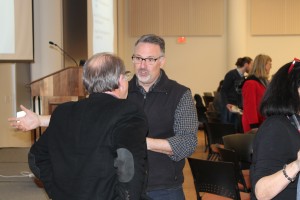 The Jan. 24 stated assembly of Lehigh Presbytery was buzzing with questions and discussion about the challenges faced by Christians in today’s world as the Rev. Dr. Tod Bolsinger spoke on his bestselling book, “Canoeing the Mountains.”

Bolsinger, who lives and works in California, attended the assembly to discuss his book and answer questions from church leaders during the program, which was held at First Presbyterian of Bethlehem, PA.

The afternoon was spent on Bolsinger’s presentation during which he discussed how churches can navigate the world’s changing landscape, drawing on the example of American explorers Lewis and Clark, who faced the challenge of having to cross the Rocky Mountains when they had been expecting a waterway.

“Why didn’t Meriwether Lewis turn back when he discovered the Rocky Mountains instead of a water route?” Bolsinger asked. “What was it that allowed them to go forward? We know we’re in a different day, but everything we’ve been trained for are rivers. Some of our churches want to go back and take care of the great traditions of canoeing. Others of us are just stuck. We don’t know what to do, we’re overwhelmed.”

Bolsinger said churches often have varying ideas of what they need to do to keep their churches going, and what they are often focused on is simply not having to close their doors.

“In 1963, not everyone was a Christian, but what was different was the placement of Christianity in culture,” he said. “Some people remember when the church was the center of society. Today, we find ourselves in a totally different arena.”

He went on to discuss how traditional churches can become missional churches. He asked those in attendance to talk with those at their table about such matters as “What is one way that you have experienced the changing world creating challenges for your ministry?”

Bolsinger suggested that churches are being called to move forward.

“Maybe God is calling us into an amazing adventure,” he said. “We were trained for a different
context. We were trained for rivers, not mountains. We need to learn a new way of leading. This context requires us as leaders to learn to lead all over again.”

Church leaders must learn the difference, he said, between a technical problem and an adaptive challenge. A technical problem means as expert can solve it with the application of current knowledge, skills, and tools. An adaptive challenge cannot be solved in that way, but rather requires people to make a shift in values, expectations, attitudes, or habits of behavior.

The fundamental task of leadership, Bolsinger said, is to distinguish between what needs to be preserved – what he called a church’s DNA – and what needs to change. Church leaders must be aware that people don’t fear change, they fear loss.

“How do we help people change, and go through the loss?” he asked.

Fear, facts, and force do not bring change, he said. What does bring change is relating (new communities), repeating (new practices), and reframing (new ways of thinking).

“In adaptive change, the giant change will be within you and me,” Bolsinger explained. “Everybody will be changed – especially the leaders.”

He challenged his audience to rethink the way they consider the church’s current situation and its vision for the future.

During a break in the meeting, Bolsinger said he was pleased with how his presentation was being received.

“It’s so encouraging to be in a presbytery where people are thinking about the future in new and creative ways,” he said.