‘Just Mercy’ asks if justice can come out of injustice, if truth matters 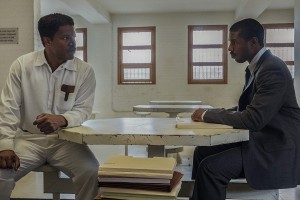 Jamie Foxx and Michael B. Jordan star in the movie “Just Mercy,” which is a story about the case of Walter McMillian, who was convicted and sentenced to death for a crime he did not commit. (Photos courtesy of Warner Bros. Entertainment)

The film Just Mercy is based on the true story of Bryan Stevenson, who went to Alabama after his graduation from Harvard Law School to work on behalf of wrongly condemned prisoners on death row, and of his first client, Walter McMillan (nicknamed Johnny D), sentenced to die in 1987 for the murder of a white teenaged girl despite evidence proving his innocence.

The opening scene in a forest shows Johnny D at work felling a tall pine tree for pulp; a rope with a weight hangs over a high branch, a tool of his trade, but a visual that conjures the noose familiar from lynchings, and intimates the long story of racial injustice in the South.

The two main characters — superbly played by Michael B. Jordan (Stevenson) and Jamie Foxx (McMillan) — build a friendship over the months and years of legal and political maneuvers and appeals for a retrial as Stevenson proves that the one witness for the prosecution was lying. The audience sees the drama of racial injustice played out in the intimacy of a death row corridor in Holman Correctional Facility and the small offices at the Equal Justice Initiative in Monroeville, AL, ironically the home of Harper Lee and the setting of To Kill a Mockingbird. (Several of the town officials encourage Stevenson to be sure to see the Mockingbird Museum and stand on the spot where Atticus Finch stood.)

The cinematography creates that intimacy by constant close-ups of the faces of the characters, black and white faces that fill the screen with expressions of human fear, trust, anger and hope. The contrast of blacks and whites, from the stark white type of titles against jet black screens, to the white churches, white prison walls, white prisoner jumpsuits and white police cars, mirrors the system of black poverty and white privilege that imprisons the community and blocks justice.

Just Mercy is in some ways a film about community, and about love. It asks where community lies for Bryan, who leaves Harvard’s classrooms and his secure home in Delaware for rural Alabama, and for Walter, separated from his family on the poor black side of town. The film’s answer is the community within the relationships forged for each in Holman and in Monroeville.

The prisoners form community with one another as they talk and joke from cell to cell, without seeing each other’s faces, and tap in chorus on the bars with metal cups as men are led to the execution chamber. Stevenson finds community with his white coworker Eva Ansley (played by Brie Larson) and her family. And community for both is in the black church, where both Bryan and Johnny D were choirboys as kids and where Bryan goes to join Johnny’s family to worship in his despair after his motion for retrial is denied.

The prisoner in the cell next to Walter McMillan who was in the movie was Anthony Ray Hinton. Hear about his story here and read about him here.

Community is ultimately in Stevenson’s relationship with Johnny D and the other prisoners he represents, who he admits are his true family, which Eva recognizes and names for him as love. 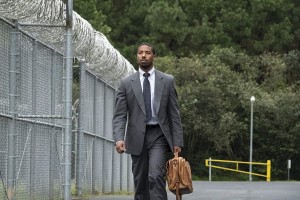 One of the most moving scenes comes when Herbert, a Vietnam vet with undiagnosed and untreated PTSD and on the row for killing a girl after a bomb he made explodes, is led to the electric chair. He is shaking with fear, and Johnny reminds him to breathe deeply and think of the tall trees standing strong through the wind year after year — a flashback to the trees that were the last things Johnny himself saw in the film’s opening scene, just before he was stopped by the cops and arrested, on his last day of freedom.

Just Mercy packs a gut punch, raising grave questions about our criminal justice system, about the death penalty, about race in America, and about truth-telling and cover-up — questions we struggle with now as much as in the late 1980s. With the killings of black Americans in Ferguson, MO; Baltimore, MD; and other American cities in our minds, we too must ask if black lives matter, if it is ever right to take a life, if justice can come out of injustice, if truth matters. At the point in the movie when it seems like Johnny’s case will not be overturned, he tells Bryan that “this is how it is done down here. These folks do what they are going to do, but I’m going out smiling. I’ve got my truth back.”

You can’t watch Just Mercy without asking what the truth of our justice system is, and what your truth is. The film is finally about the possibility of transformation, and the reality of hope. But it is hard work.

I left the theater with the words of the Mass set by Verdi in his Requiem in my mind: “Who will intercede for us, when even the just want mercy?” And the words of the prophet Micah: “O mortal, what does the Lord require of you but to do justice, and to love mercy, and to walk humbly with your God?”