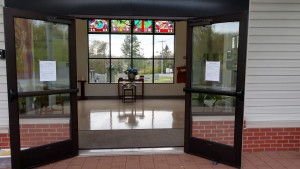 With many precautions in place, Old Union Presbyterian Church in Mars, PA, held in-person worship on Sunday, May 17, for the first time since the coronavirus pandemic caused restrictions to be put into place in Pennsylvania.

Editor’s Note: The Synod of the Trinity is not in any way intending to encourage congregations to open at this time but understands that some will seek to do so when allowed, following the CDC and state guidelines. We appreciate and respect the great care for safety that Old Union Presbyterian Church has taken as it has begun to reopen, and trust that others will be as thorough in their considerations.

Making and distributing masks. Organizing blood drives. Coordinating with other local congregations for an online Good Friday service. It isn’t the way the leadership and volunteers at Old Union Presbyterian Church planned on spending their spring, but it is what is occurring with the congregation in Beaver-Butler Presbytery – and many, many others across the region — in light of the coronavirus pandemic.

Knowing that these needs were arising in the Mars, PA, community where the church is located and in an area where many of its members reside, it caused many in the congregation to step forward in this great time of need.

“We’re always looking for ways we can be reaching out to the community in a positive way,” said the Rev. Dr. Peter de Vries.

Among the first things the congregation did was contact the Butler County Emergency Management Agency to let it know the Old Union Church building was available as a testing site or for an overflow of hospital beds during the pandemic. As of late May, the building has not been needed for this type of service. Volunteers from the church also made themselves available to the community for grocery shopping and other errands, but no one has taken them up on this offer either at this point.

During the first few weeks of the coronavirus outbreak, news began to spread that there was a shortage of blood in the area. Many organizations were canceling blood drives because they did not want people who could be infected in their buildings. Old Union Church, which had never hosted a blood drive before, felt called to host one at the church during Holy Week in early April, with 35 donors turning out for it – 31 of whom had never donated blood before.

This outreach fueled a fire in church member Julie Meeder, who responded by making masks that could be given out to donors at the drive. She has gone on to sew 400 masks for the community, many of which have been available to the public in a bin located on the church steps.

“She really did feel called by God to start making masks,” Peter said of Julie. “When people offered to pay for them, she said, ‘No, this is what I have to offer.’”

Furthermore, one person in the community who is not a member of the congregation picked up masks at the church to deliver them to the elderly who could not venture out to pick them up. “She ended up being this unintentional, spontaneous partner with us to get the masks out,” Peter added. 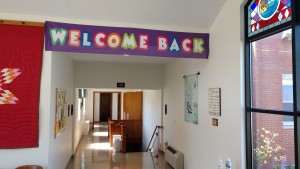 Signage welcomed back worshipers to Old Union Church in mid-May.

The blood drive occurred on Maundy Thursday, and the following day Old Union Church was part of an online Good Friday service. With Peter being the convener of the Mars Area Ministerium that organizes the annual service that is normally held at the Mars United Presbyterian Church, he participated with an eight-minister team that prepared this first-of-its-kind online worship that has received more than 500 views on YouTube.

Old Union Church has had its own online presence during the pandemic. Peter has been doing daily video devotions that are available on the church’s Facebook page. Six days a week (excluding Sunday), Peter does a roughly seven-minute live video based on scripture that also includes a prayer. While the live video is posted at 2 p.m., a recording can be viewed after the fact.

The church has also been using Facebook Live for its weekly worship services since mid-March. It’s a format that lends to some different interaction among the viewers.

“We wanted to enable as much participation as possible,” Peter explained. “During our worship services, I was telling people this is a time when you’re allowed to have side conversations during worship. I told them to feel free to put up comments during the service, reading each other’s comments, posting prayer requests, or just checking in with each other.

“Some people were saying this is an opportunity to be innovative (with their online worship). With all of these other changes going on, I tried to keep this as familiar and normal as possible to give people some sense of stability while everything else is going crazy.”

Online worship is continuing at Old Union even though the church has begun in-person worship. The weekend after Pennsylvania Governor Tom Wolf declared Butler County a “yellow” county on May 15, thus lifting some restrictions there, the congregation opened its doors. Peter felt it was something his worshipers wanted and needed.

Before the pandemic hit, the congregation had started a grouping system of its worshipers in which roughly 15 households were placed in a “flock,” which would consist of about 20-25 active and inactive members assigned based on family and friendship connections. Each “flock” also has two co-shepherds, which are a session member and a deacon. The purpose of the “flocks” was to ensure that everyone in the congregation was being contacted and cared for on a regular basis. 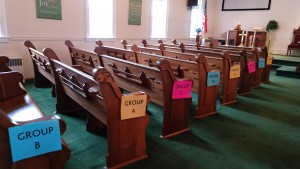 Pews were clearly marked for the three groups of people who attended in-person worship at Old Union Church during the May 16-17 weekend.

As Peter and the Old Union session began thinking about how they could safely hold in-person worship while still abiding by the Centers for Disease Control and Prevention’s order to not have groups gather with more than 25 people, they used the flocks to achieve that. Old Union held three services its first week back in the church building, one on Saturday (4 p.m.) and two on Sunday (10 a.m., 4 p.m.), with the 10 a.m. Sunday service still livestreamed on Facebook. Three flocks were assigned to each time slot, and the plan was to have the flocks rotate among those times going forward.

Aside from everyone wearing gloves and masks, there were numerous other safety precautions put in place, including:

Twenty-seven total people turned out for the three services, with 12 being the most at any one worship time. Peter did not know of any other churches in the area that had opened their doors in the days following the county’s move to yellow but knew of churches in the ministerium who were planning their return in the coming weeks.

“Even though the majority of the congregation decided not to join us, for those who did want to, we gave them that opportunity,” said Peter, who added that the average Sunday attendance is about 70. “Even for those who choose not to, if things change and they do decide to start coming, I know they’ll appreciate having that as an option for them. We don’t want anyone to feel like they have to or that there is an expectation for them to come. We want to completely respect people’s desire to stay safe.

“When I first came out of seminary, I served a yoked parish of two churches. In a way, it felt a little bit like going back to that. It did feel weird to be up in the pulpit and have just a small handful of people in the sanctuary, but it felt a lot less weird than preaching to a camera lens, which I have been doing for the past two months. It was weird but not as weird as what it had been.”

Old Union’s session met on the Monday after the services to evaluate the proceedings and decided to tweak the first week’s schedule. Because of the low turnout, it was felt that only one service was needed (Sunday, 10 a.m.), with the congregation being divided into two groups. One group will worship in the sanctuary while the other will watch a livestream in the fellowship hall. The groups will not have access to each other and will use different entrances to enter their spaces. 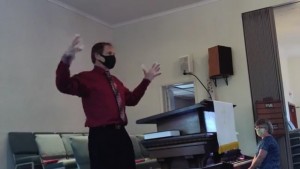 With a mask and gloves on, the Rev. Dr. Peter de Vries speaks to his congregation on Sunday, May 17, during one of three in-person services held at Old Union Church.

“This isn’t something I wanted to be a pioneer on,” Peter said. “I want to err on the side of caution. I did share our protocols with everyone in the ministerium. The conversation with the session (on the day Gov. Wolf announced Butler County would go yellow a week later) was that we want to get back as soon as possible in order to get the life of our church started back up again, but we’re only going to open up with the guidelines that we have.”

All of these actions – from the blood drives to the making of masks to deciding to hold in-person worship – have come following hours of discernment and prayer. And while it might be hard to find the “good” in this pandemic, Peter knows it’s there.

“You can focus on the problems, the shortcomings and the difficulties, but I can see God’s fingerprints all over this,” he said. “We had the flock system ready to go and in place before this hit. We were able to do the blood drive and it all just fell into place. The online worship services – not only did we reach the people who would already be at church, but there’s so many more people we reached. People are now aware of what our church is doing and have been receiving God’s word from us and gaining a sense of gospel through our ministry. It’s just incredible to see how all of that happened.”