For four decades, David Oyler has been a buoy in Lake Erie 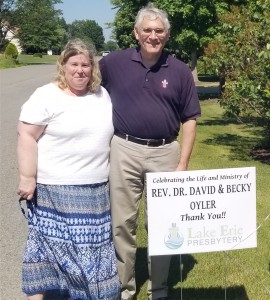 David Oyler and his wife, Becky, were honored by several events at the Presbytery of Lake Erie, including a Sunday afternoon drive-by of their home for friends of the longtime general presbyter.

Forty-one years is a long time for someone to stay in the same profession. It is even more rare for a pastor to remain in the same area for that amount of time. But the Rev. Dr. David Oyler is not your average minister of word and sacrament, and anyone who has ever spent time around him will be able to tell you that immediately.

A call that has included stops in Crawford and Erie counties for 24 years as pastor of churches there before spending his last 17 as the general presbyter of the Presbytery of Lake Erie is concluding at the end of July when David retires from full-time work.

“David Oyler is one of the most pastorally attuned execs that I have had the honor of ministering with over my career,” said the Rev. Susan Faye Wonderland, transitional executive of the Synod of the Trinity. “No matter what kind of work he is doing – administration, conflict work, meeting leadership, etc. – David never forgets his first calling, to be a pastor, always.”

A native of Armstrong County, a high school graduate in Mercer County and a college graduate of Grove City College, David has spent nearly his entire life in western Pennsylvania – except for the four years he was at Gordon Conwell Theological Seminary in Boston. He then went on to serve Hartstown and North Shenango Churches (Crawford County) for six years before leading the First Presbyterian Church of North East (Erie County) for 18 years. Clearly, the Lake Erie region has been a perfect fit for David.

“I interviewed in three different states for a possible first call in 1979 and truly the two churches I went to serve, it was not so much that family was here but a sense of call that the skills and experience I had would allow me to serve those two churches in western Crawford County,” he recalled. “After six years I was invited to serve the North East Church in Erie County and that was not through my planning at all – I would say very clearly through God’s planning.”

David was also the part-time stated clerk at the Presbytery of Lake Erie for seven years while serving at the North East Church before being approached about the general presbyter opening. He’ll admit that mid council work was not something he was looking to pursue but that a higher power had other plans and eventually led him to that position. It ended up being a perfect fit for him and the presbytery.

“I have been very encouraged by the engaging of missional conversations in churches,” David said, referring to the growth of the presbytery during his tenure. “That I find to be very encouraging.”

David has also been proud of the presbytery’s ability to move away from the financial assistance for pastoral leadership it was providing some congregations within its bounds, thus moving those congregations to adapt to their financial circumstances and become more financially independent. This has allowed the presbytery to use those funds for other things like outreach programs that are having an impact on various communities in the region.

“It hasn’t been so much about bricks and mortar but rather about relationships and people with those dollars,” David added.

The Presbytery of Lake Erie’s growing partnership with the western African country of Ghana is another bright spot for David when he reflects on his call. The presbytery’s Mission Travel Grants that encourage congregations to travel to other parts of the country and world to experience new cultures is an initiative that has gained momentum in the past two decades as well.

“The church is about relationships,” David said, “certainly a relationship with God, but also a relationship with one another. I have valued over the years visiting in people’s homes, learning their and their family’s stories of faith, worshiping with them on a weekly basis – and that would have been true as I continued in North East for 18 years. In the last 17 years I filled a different role; however, that sweet spot continues. It is about relationships. Part of my job has been to be a pastor to pastors, break bread with a pastor and hear how life and ministry is going for them in their particular setting.”

In the 17 years David has been the general presbyter, only two congregations in the Presbytery of Lake Erie have concluded their ministries while two others merged for a net loss of just three. Even though he deflects credit, that’s a testament to David’s leadership during a time when the denomination’s stance on sexuality changed and many conservative congregations decided to take their houses of worship elsewhere.

“Over the last 41 years, the conversations – difficult as they have been at times – around sexuality, Lake Erie Presbytery has been fortunate in that they have not experienced as much of the stress and strain that has been true in other presbyteries around theology and the departing of congregations to other denominations,” he said. “I would attribute some of that to, like churches see themselves as family-sized churches, in some ways this is a family-sized presbytery. The pastors, whether they be traditional/conservative or progressive/liberal, had enough respect for each other that they continued to be in partnership and relationship even when they had differing perspectives and differing vote tallies on various overtures that had come over the years around sexuality.”

Despite some of those conversations being still in front of the presbytery, as well as new obstacles like the coronavirus, David is confident Lake Erie is headed down a path to continued success.

David is not finished with his work in the Synod of the Trinity as he continues to be the temporary part-time executive at Beaver-Butler Presbytery. He will remain serving in that capacity until Beaver-Butler finds a full-time executive. This position in western PA fits in well with the fact that three of David’s four children live in the Pittsburgh area, resulting in a justifiable move from Lake Erie to that region for David and his wife, Becky.

Family is clearly important to David, and while both his father and grandfather were Presbyterian pastors, he was not pressured into becoming a minister. But that history clearly rubbed off on David as well as his siblings since four of his five sisters were elders in Presbyterian churches in the Synod of the Trinity and his brother is an elder in Ohio. So, in some ways David’s journey through ministry in the Presbyterian Church was predestined for him by his family’s influence, but he’s made his own choices and they have paid off for him and those in the Presbytery of Lake Erie.

“God’s hand moves in some mysterious ways,” he concluded. “God has used me in ways that I have not anticipated. I really envisioned myself as I finished seminary serving in smaller congregations. I did in fact move to a larger congregation, and then moved to some middle governing body work. I don’t see that as any kind of promotion but rather trying to follow and listen to God’s calling in my life even though I did not anticipate that. God has used me in some wonderful and powerful ways but not in ways that I would have anticipated when I was graduating from high school in Mercer County. There have been a number of surprises along the way.”