There’s a six-pack of water that was donated from Budweiser that sits in the home of the Rev. Bruce Stevens. It serves as a reminder of when he needed that to help survive raging flood waters that ravished his hometown of Petersburg, WV, in 1985. 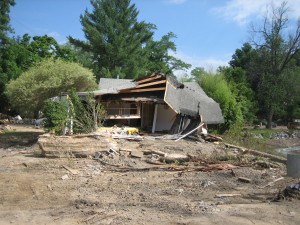 A house sits empty after being destroyed by the ravaging floods in White Sulphur Springs, WV.

Fast forward 31 years and Bruce, the former Synod of the Trinity Executive, is seeing that nightmare relived in the southern part of his state where on June 23 torrential rains caused massive flooding that has taken the lives of 23 people and severely damaged or destroyed 1,200 homes. It’s an eerily-similar situation that Bruce himself experienced first-hand.

“Here in Grant County where I live, we’re pretty sensitive to it because a similar thing happened in 1985,” Bruce said. “We live right on the Potomac River and in our house the flood got above the first-story windows. We couldn’t move back into the house for about eight weeks. Eleven people died in that flood. Our town was virtually destroyed.”

Because he was on that side of a disaster, Bruce has been quick to respond to the flooding this time around. A few days after the storms hit, he filled his truck with around 1,000 pounds of canned goods from the Grant County Ministerial Food Pantry and drove to Summersville, WV, which is about 10 miles from the hardest hit areas of West Virginia. The scene was eerily familiar.

“Disaster sites are very strange because there’s just a whole bunch of muddy people and construction vehicles,” he said. “As I was on my way out going up Route 19, there were just these parades of electrical construction vehicles to put in new poles. I saw plates on them from Ohio and from Pennsylvania – outside contractors coming in to get them started.”

According to reports, as much as a foot of rain fell on parts of southern West Virginia in only a few hours. It’s being called a “1,000-year flood,” meaning that this type of storm only happens once every 1,000 years. Consecutive storms bunched up along the mountains, a phenomenon meteorologists call “training” because the storms line up like freight cars on a train. That, combined with narrow valleys in places like Greenbrier County, caused all of the rain to flow down the hills and into the same area to create the massive flooding.

While people might think the water is the worst part of the flooding and the eventual cleanup, it’s the mud that is actually the hardest thing to manage.

“Flood mud is like no other mud in the world,” Bruce said. “It is a very, very fine grit, and it’s driven by water that might be traveling at 26, 27 miles an hour, which is racing for water. It just gets into everything. Hermetically sealed boxes that are supposed to be waterproof, it works its way in. It just covers everything. What was once a green lawn has ripped the grass up and now it’s just a muddy field.

“If the flood water gets in your house, your carpets are destroyed. You can’t clean it out; it is so pervasive. It gets into your appliances. At this point walking around down there, there’s just mud every place and everybody’s covered with mud.

“The first impression is that everything is just so muddy. But then beyond that there are piles of garbage – but it’s not garbage, it’s the contents of people’s homes. The flood waters will push a house down and break up all the boards and mix it with the furniture and everything that somebody had in their home. Then it will drive into a pile, it will get caught on something and form this pile. It will leave giant piles of garbage as big as a barn in weird places. It’s just awful.”

Bruce has been asked to be the volunteer coordinator for his town of Petersburg, being charged with lining up work teams to help those in the southern part of the state. Volunteers obviously can play a huge role in the recovery process, but not just those who are rebuilding homes. 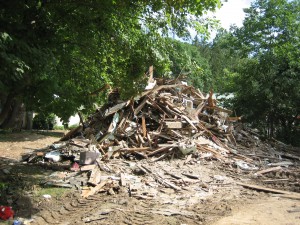 A house has been reduced to rubble following the devastating flood in White Sulphur Springs, WV.

“People have vacant looks in their faces because they’re physically tired and they’re mentally tired,” Bruce said. “The people that live in the midst of these things, their immediate reaction is to just give up and walk away because the task of even cleaning it up seems totally overwhelming to them. Part of the importance of the volunteers going down there is not only the physical work they do – that matters tremendously – but even more important is to have people around who are helpful and hopeful. That helps to restore some of the hopefulness of the people who live down there. People are in the midst of this almost overwhelming grief process because they’ve lost it all and having other people around who will let them tell their story and just talk it out, people who still have the capacity to laugh, people who will just put their arms around the shoulder and hold them, there’s just no price that can be put on them.”

Many congregations are also reaching out to the flood victims by collecting food and money for the relief efforts. Bruce is also part of that situation at Terra Alta (WV) Presbyterian Church where he is the moderator of the session. The church is closing and held its last service on Sunday, July 3, but before it shut its doors for good the congregation decided to make its presence felt one final time.

“These past two weeks they have committed their entire offering to flood relief,” Bruce said. “After worship on Sunday I was talking with the Stated Clerk of the church and he said, ‘We have a completely furnished church – pews, communion table, everything. Can you find out if there’s a church in southern West Virginia that their sanctuary was destroyed? We’d be happy to send everything including the organ down to them.’ We’re not aware of any Presbyterian churches that were severely damaged. Who knows, this may go to a Baptist church or some other church.”

It’s your classic case of something good happening from something bad, which will also be the underlying tone from Christians who make their way to southern West Virginia over the next few days, weeks, months and probably years to help them rebuild. It also brings to mind the question that non-Christians ask when something of this magnitude happens in the world: “How could a loving God allow something this horrible to happen?”

“In terms of my understanding, God doesn’t create the floods,” Bruce said. “Yes, God created nature but that’s just a natural force. When we live in a flood area, we should know it’s a flood area. We live on the banks of the Potomac River. One of the things that says to us is that a couple times a year we’re going to have high water.

“I don’t believe God did this. This is just a natural occurrence. People chose to live there, nature is what it is, this happened. I believe that God’s presence is down there right now with those people. Yes, it is through the volunteers because Romans 9 says, ‘In all things God is at work for the good of those who love him.’ I absolutely believe that God is at work healing these people and also transforming the people who go down there to work. People volunteer to go down there and spend 4-5 days. Their faith will be changed.”