Presbytery of Carlisle continues to build homes, relationships in Honduras 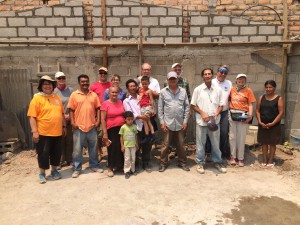 This group from the Presbytery of Carlisle traveled to Honduras in April of 2016, one of two trips the presbytery takes on an annual basis.

The Rev. Kim Wadlington will admit that she’s not an expert with a hammer and saw. But that doesn’t stop her from traveling to Honduras twice a year to help build houses in impoverished communities in this Central American country.

“The reason that we go there is because, even given all of the poverty and gang violence, the people that we work with are some of the most hopeful people I have ever met. They are just a sense of joy and living and relationship, and their sense of perseverance is incredible. And it’s inspiring. I always encourage our teams that go to bring home the hope that they have because when we go that is what fills our hearts; it’s their hope and desire to be in partnership with us.” 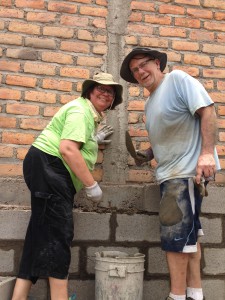 Doug and Debbie Beltzner from Greencastle, PA, help build a wall for a home in Honduras.

A partnership that began a decade ago, Kim has been involved with it for the last five years, regularly taking the spring and fall trip to Honduras as part of a group that only numbers 10 at the most. During those trips, the goal was to build one house per year, a number that has now doubled to two in recent years. Money that is donated by churches in the Presbytery of Carlisle goes toward the materials that are used to build the houses, which cost just roughly $3,500 a piece to build.

Another change that has taken place over the past decade has been the area in which the urban housing ministry takes place. There are now three churches involved in the program in the Tegucigalpa area of Honduras, and the targeted congregation where a house is built rotates between them. A committee is in charge of selecting the family that receives the new house, a process the Presbytery of Carlisle did not want to have a hand in.

“Because we began the ministry with one church, they formed a housing committee, and that committee decided who in this congregation would receive a home,” Kim explained. “It happened for the first couple of years that if you were on the committee, you received a home. We didn’t want to be the North Americans who went in and imposed our will, so we let them work it out. They eventually began to see that they really could not continue to do it that way, that that was not serving the congregation, it was really more self-serving.”

Housing is certainly a great need in Honduras, as the living conditions are many times less-than-ideal. Seeing the circumstances in which the people live has left a lasting impression on Kim. 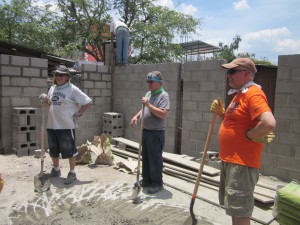 From left, Doug Beltzner, David Hoover (Mechanicsburg PC) and Vern Gauthier (First United PC of Newville) take a break while working on the foundation of a Honduran home.

“Often housing is nonexistent and you have multiple generations of families really packed into small homes,” Kim said. “Maybe mom has a home and it’s 8 meters by 8 meters and you have two or three families living there. As often, it’s providing housing for somebody who doesn’t have a house at all and is either staying on the streets or spends the nights with different people.

“Sometimes it’s sub-standard housing. The woman for whom we just built in April had a wooden house that she had lived in for 35 years and raised five children. They began the deconstruction before we got there but there was a little bit of the house to take down and we couldn’t believe it was still standing. There was dry rot and termites. So sometimes it’s just providing more secure housing for them, mostly because of poverty.”

While the need for housing was how the relationship between the Presbytery of Carlisle and Presbytery of Honduras started, it has grown. Now, a secondary focus is on theological education.

“We’re working with them to find some curriculum so that they can use it to educate both pastors and ordained leaders that are not pastors – Ruling Elders – in their presbytery,” Kim said. “We’re also working on some new church development with them. The church in Honduras is mostly located in the southern part of the country and they would like to start looking at moving into the northern part of the country as well.” 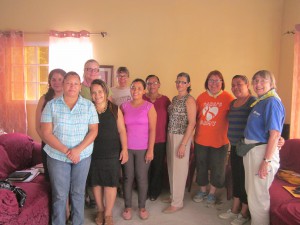 Women from the Presbytery of Carlisle meet with the PW of Honduras leadership to discuss grant application.

Also, because of funding that has been withdrawn by the Presbyterian Mission Agency, Carlisle’s mission co-worker has been withdrawn from Honduras. However, by creating a job description and a funding plan, an effort is being made to place someone back in the area.

Yes, the money helps build the homes and put co-workers in the area, but it’s the interaction of the individuals that makes the twice-annual trips to Honduras something special.

“We asked them, if we could only do one thing, if we could only send money or only travel to see you, which would you prefer?” Kim said. “And without even skipping a beat they said, ‘Come to see us because knowing that there are people around the country who care enough to be in a relationship with us, who are praying for us, who are brothers and sisters in Christ, is the most important thing. The housing is obviously a wonderful benefit to them, but it’s really the relationship for both of us that sustains the partnership.”

Note: Anyone wishing to learn more about the partnership with Honduras or who would be interested in donating money or manpower to it, contact Kim by email at revkim@middlespringpc.org.