For the Rev. Ed Thompson, it feels good to be back home in West Virginia

The Rev. Ed Thompson has a note on his desk at the Presbytery of West Virginia that reads, “God has put you in the right place,” something a coach told him a decade ago. He could easily add the word “again” to the end of that sentence. 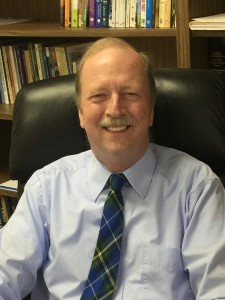 The new General Presbyter in West Virginia is back for his second tour of duty in the state, having stepped into his new role on Feb. 1. From 1995 to 2007, Ed served at McKinnon Presbyterian Church near Charleston while also being one of the presbytery’s quadrant ministers. In between, he spent eight-plus years working in the Presbytery of North Kansas as its General Presbyter and Stated Clerk. He’s glad to be back home.

“God has put me in the right place,” Ed said. “I think God has put me here because this presbytery needs the gifts and skills that I bring. I’m just going to do the best I can listening to the people trying to offer them my perspective and based on my experience, what I think might be helpful to them.”

While Ed has only been on the job for a couple of months, because of his history with West Virginia, he knows the territory very well and is ready to jump in with both feet.

How to answer that question remains to be seen for Ed, but he’s ready to go out and find a solution.

“I just need to go and listen and just be available to the churches,” he said. “I don’t have all the answers, but I do think churches that size can have effective ministry, and I want to listen to see what they want, what they need. How can I be helpful to them? How can we be helpful to them? At this point I see myself as having more of a ministry of listening.”

Ed has enjoyed seeing familiar faces again and becoming reacquainted with West Virginia. He admits there have been some changes and it will take some time to sort out some things.

“There’s a lot of the same people here and there’s still a good spirit in the presbytery,” he said. “But there are also some differences and I’m still trying to figure that out. We had some churches leave because of the changes in ordination standards and marriage. I don’t necessarily hear people talk a lot about that, but maybe some of the changes are due to that. In some ways I think it’s helpful that I come in with more of an open attitude, a questioning attitude. I think it encourages me to talk to people and to listen to their answers.”

Ed grew up in western Pennsylvania, attending Clen-Moore Presbyterian Church in New Castle. He graduated from the College of William & Mary and Union Theological Seminary, both in Virginia. He then returned to western PA and served at Mahoning Presbyterian Church in Pulaski for 14 years before making his first move to West Virginia. Feeling a calling to be a General Presbyter, he filled an opening in Kansas for that position in 2007 until seeing an ad last year for the position in West Virginia.

“I enjoyed my time in Kansas. Things were going well. I wasn’t really looking to move,” he admitted. “But I was attracted to come back to West Virginia. The people in Kansas were great. They treated me well. But over 12 years I developed a lot of friendships here and I just grew to love the people. I missed that.”

Fortunately, the search committee at the Presbytery of West Virginia felt the same way.

“This is the hand of God,” Ed said. “I wouldn’t have blamed the committee for saying, ‘We need someone with a fresh outlook’ or ‘We’d like to have someone who’s younger.’ But there was just a connection with the committee. When I read their Ministry Information Form, I felt connected to the state and to this presbytery. I think what they were looking for described me, described who I am, described what I like to do and what I feel called to do.

“It feels good to be back. It does feel like home.”