Religious denominations in the United States have been riding a seemingly continual ebb and flow of emotions from its members for many years. Everything from its stance on social issues to women in ministry to politics have caused attendance figures in churches to fluctuate for decades. And the Presbyterian Church is no different. 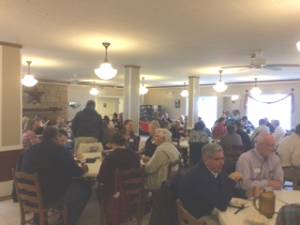 In September of 2015, the Rev. Heath Rada, the Moderator of the 2014 General Assembly of the Presbyterian Church (U.S.A.), issued a “Call to the Church” to “tap into the thoughts and priorities of a representative sample of the PC(USA) by focusing on specific audiences.” He urged Presbyterians to participate in an online survey and also take part in conversation opportunities around the country. While he is personally attending six such programs, including one at Princeton Theological Seminary in New Jersey, he urged other PCUSA entities to hold similar discussions. One specific invitation went to Pittsburgh Presbytery and Crestfield Camp and Conference Center in Slippery Rock, which agreed to host the event in mid-March.

With the Rev. Sheldon Sorge, the General Minister to the presbytery, leading the way, 117 people from eight presbyteries were present at the three-hour gathering on a Tuesday that included worship, a video greeting from Heath, structured roundtable discussions and lunch conversations. It was during the latter that people were able to express their feelings toward the current state of the church.

Thirty pages of notes from the meeting were condensed into a five-page report that Sheldon forwarded onto Heath. (Read the report by clicking here.) This document and others like it collected from the various meeting locations will be discussed by a committee at the 2016 General Assembly, which will be held in Portland, OR, from June 18-25.

The majority of the information from Crestfield’s summary came from the table discussions, which included responses to questions like “What should the PCUSA be committed to hang on to and what should it be ready to let go of?” and “What has gotten in the way of our church thriving as it ought?” 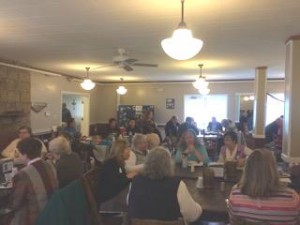 Overall, Sheldon was pleasantly surprised by the turnout – they had 90 registered originally but another 27 arrived at the door – and he was pleased with the reaction and focus of those who participated.

“There was a lot of energy,” Sheldon admitted. “There was a real buzz in the room. We did a lot of table talk, which got people engaged in conversation rather than simply being passive and listening. There was a deep sense that people really cared about this stuff. They gave up a day in the middle of the week. I was very impressed with the age distribution. Usually when we have a daytime weekday event, we don’t have really good representation of younger people, and I would say we had a really strong representation of people under 50.”

The Rev. Joy Kaufmann, the General Presbyter at Huntingdon Presbytery, agreed that the overall spirit of the meeting was good and that a step was taken in the right direction through this gathering and conversation.

“The ‘Call to the Church’ conversations were a good indicator of how deeply people care about the church,” she said. “The topics were timely, the conversations vigorous, and both the joys and concerns lifted up were sincere. Whether or not Moderator Rada’s ‘call’ to all of us to ponder prayerfully what God has in mind for the PC(USA) can make a difference will, in large measure, depend upon our continued faithfulness, not just upon one set of conversations. Nonetheless, it was a good beginning.”

The Rev. Ralph Hawkins, the Executive Presbyter and Stated Clerk at the Presbytery of Shenango, felt that even though the gathering was strong, those in attendance need to carry forward the thoughts and ideas that were expressed and not count on a higher body to see it through.

“On the one hand, there’s always value in getting Teaching and Ruling Elders (and other leaders) together to engage our strange current context and call therein,” he said. “It can help to talk things out. On the other hand, these gatherings have limited value, I think, because it is not by brainstorming or ingenuity that our problems will be solved … nor by sending our concerns up the line toward the moderator or the Assembly. The best we can do, I think, is to marshal our efforts ‘downward’ (or better, outward) to ‘equip the saints for ministry.’ There’s not much the GA can do to inspire local Teaching and Ruling Elders to equip our congregations for witness and work. It just has become a priority, not a program. That said, again, there is value in coming together. But to what end?”

Because the conversation was so spirited, some expressed to Sheldon that the event wasn’t long enough, which he took as both a learning tool and a positive comment because people were engaged.

“The response to the Call to the Church by General Assembly Moderator Heath Rada clearly indicated a deep passion for the Presbyterian Church,” said the Rev. David Oyler, the General Presbyter at the Presbytery of Lake Erie. “Time did not easily permit in-depth conversation; however, creative concern for the present and future ministry of the denomination we love was clearly evident. It was good to be together from numerous presbyteries in seeking to discover God’s missional call in significant transitional times. Continuing thoughtful conversation is crucial.” 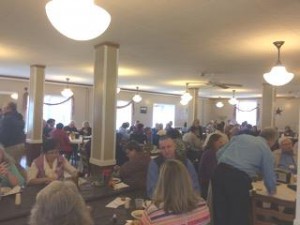 Another comment was that some people felt concerned that their voices wouldn’t be heard through this gathering. However, Sheldon not only forwarded the meeting recap to Heath but also to everyone in attendance so that they know exactly what was sent.

“One of the things that came up in the responses was that there’s too much top-down authority being exercised in the system and that people from the grassroots don’t really have a voice,” Sheldon said. “That was said several times like this: People in smaller, more rural churches are really voiceless, that if you want to have a voice you have to be part of a bigger church, you have to be in an urban setting and that helps if you’re part of the apparatus that runs the show. There is a significant feeling that the way our church has evolved we have not been as faithful as we need to be to our principle of shared governance.”

Something else that stuck with Sheldon were the ranges of opinions that came from the table talks. For instance, one comment suggested a need to abandon the Office of the General Assembly but keep the Presbyterian Mission Agency, while another felt a need to keep both and a third thinks abandoning both and coming up with a new model of national leadership is the way to go. It was a common theme.

“One table said we celebrate the diversity of and the welcoming and inclusion of all persons regardless of race, gender or sexual orientation,” Sheldon continued. “And the next table said we have abandoned the Bible’s teaching on homosexuality. It graphically underscores the breadth of the spectrum. What it tells me is that we have a great challenge in that we have so many differing opinions within our church. How do you keep that kind of a congregation together when they’re all over the map? It also gives me great hope in that when we have such a broad range of views and convictions, that we have a better hope of being truly the church in all of its variety with all of its members functioning together.”

Sheldon was happy to help provide an avenue for these talks at Crestfield Camp to assist Heath in getting a better understanding of the conversations that are going on in the Presbyterian Church.

“I think (the Call to the Church) is for the love of the church and his (Heath’s) feeling that we need to address some of these critical issues sooner rather than later,” Sheldon said. “He wants to hear the hopes and the concerns that come from the grassroots. I think he feels that we’re at a time where we can no longer afford to be talking informally and complaining about things but we need to find a new way forward.”