Forrest Claassen excited to ‘serve in the home base of Presbyterianism’ 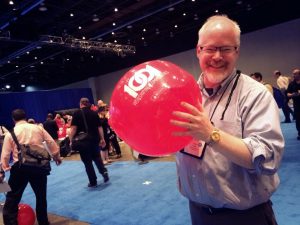 Forrest Claassen, pictured at a recent General Assembly gathering, brings enthusiasm and plenty of mid council experience to his role as executive for the Synod of the Trinity. (Photo by Erin Dunigan)

Forrest Claassen was pastoring a church in rural Alaska when he first became acquainted with the Synod of the Trinity. That experience more than 20 years ago had a lasting impression on him, one that he can still vividly recall to this day.

“We had a great experience with (the Synod of the Trinity) when they sent a mission team to Alaska to do work on our church’s building,” he recalled. “It was one or two kids plus sponsors from each of the different presbyteries as opposed to a single, large, wealthy congregation going and doing a mission trip. It was these kids from little congregations that could never have done a mission trip on their own coming to a little congregation that could never have asked people to come on their own.

“I thought, ‘This is Presbyterianism.’ It really fits that ‘Being More Together’ attitude.”

Fast forward to 2022 and Forrest now has the opportunity to be on the other end of those outreaches as he begins his call as the Synod’s executive. Forrest started at the Synod on Jan. 1, replacing Susan Faye Wonderland, who retired at the end of 2021 after 13 years in rolls as the Synod’s transitional and associate executive.

“We (the Synod) can and are doing things as a group that any individual congregation – and maybe even any individual presbytery – just doesn’t have the wherewithal to pull off,” Forrest added.

While that memory of a Synod work team coming to Alaska remains fresh in Forrest’s mind, there’s another factor that also persuaded him to apply for the opening at the Synod.

“The thought of what would it be like to serve in the home base of Presbyterianism,” Forrest continued, referring to the fact that the Synod of the Trinity was the first synod established in 1717. “Thinking about, ‘Wow, this is where American Presbyterianism started.’ What would that be like (to serve here)? This is deep. There’s a certain type of durability in that age. This synod has already seen its way through a whole bunch of different kinds of national crises that have affected its communities, its cultures and its ministries. They’ve had to change and tack into those new realities repeatedly – and they have, and they’re still doing it.”

Aside from studying at Princeton Theological Seminary, Forrest has spent his life on the West Coast. For the past eight years, he was the co-executive and stated clerk at the Presbytery of Los Ranchos in Anaheim, CA. Prior to that he was the stated clerk at the Presbytery of the Inland Northwest in Spokane, WA, which overlapped with his pastoring the First Presbyterian Church of Clarkston, WA. From 1995-2005, he began his pastoral career with calls at Presbyterian churches in Hydaburg and Craig, AK.

Forrest admits that it will be a big change coming east but that he sees plenty of similarities in the regions.

“Rural life and tough weather are ones where there’s a lot of similarity even though it’s different parts of the country,” he said. “Those are the sorts of things that shape people in a way that is similar in either place.” 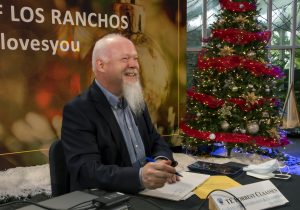 Forrest spent 12 years as a stated clerk and executive at two West Coast presbyteries before deciding to come east to lead the Synod of the Trinity. (Photo by Gary Mills)

Forrest knows that it will take time to learn the region and become acclimated to it. He understands that he’s “the new kid on the block.” But those challenges Forrest believes will soon become moot as he begins the journey with the region.

“What can we do together to move the kingdom of God forward during this little window of time that we share?” he said. “I’m hoping that kind of humility will be the beginning of getting somewhere.”

Certainly, there are other hurdles to clear as Forrest learns the region and how it’s structured, but he’s ready to dig in and get to work.

“One of my goals is to think about what it means that this is still the church and not just an institution that’s meant to support the church. It’s not a congregation, it’s not the fundamental unit of ministry. But it is a community that is defined by the call of Christ. What does that mean when we’re talking about a structure that is two stages removed from the local congregation where ministry is really meant to happen? What does it mean to be theologically and ecclesiologically meaningful to people?”

Leading a synod or any other religious organization was not in the future for Forrest when he started attending Stanford University. He graduated with a degree in psychology and decision sciences, and a research assistant job with a law professor led him to employment as a legal assistant and auditor in San Francisco. However, a humanities project on theologian Karl Barth laid the groundwork for a future in ministry after dabbling in law proved to not be Forrest’s cup of tea. 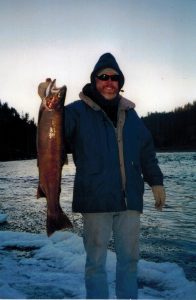 Forrest developed a love for fishing during his time leading churches in Alaska and Washington.

When his wife Karen enrolled in Princeton Seminary a few years out of college, Forrest decided to follow in her footsteps. They had driven up the East Coast, visiting seminaries from Duke in North Carolina to Yale in Connecticut. Research proved that Princeton would be the best fit for Forrest as well since he was leaning toward becoming a teacher after seminary. However, by the time he graduated, Forrest was swayed into finding a church to lead, and he and Karen soon accepted a call as co-pastors in Craig, AK.

“We committed to five years, but after 10 years we realized we loved this place,” Forrest recalled. “It got in under our skin. I found myself that I was a pastor and there was no turning back. There were a lot of ways in which I was drawn to in teaching I was able to do, and the parts that I knew I hated in teaching I didn’t have to do in that role.”

After the decade in Alaska, Forrest accepted a call in Clarkston, WA, and four years into that position he also took on the role as the Presbytery of Inland Northwest’s stated clerk. It got his feet wet in mid council work that led to a dual role of co-executive and stated clerk at the Presbytery of Los Ranchos.

“What I love about mid council life is being able to bring the tools of Presbyterianism to bear in a way that help congregations when they get stuck or when they’re trying to do something and they don’t know how to make it happen but there’s somebody who can help them figure out how to make it happen,” Forrest said. “A good mid council leader can really help, not just in saying what you can and can’t do but saying here’s how you can do it.”

That will be the goal for Forrest and the Synod staff going forward: continuing to find ways to help the presbyteries and congregations in the region navigate through this unprecedented time so that they can be better ministers and examples in the image of God. Forrest feels that his experiences on the West Coast have him ready to tackle what awaits in the East.

“There is a way in which I have been prepped for this,” said Forrest. “This is a new variation of an old theme. It feels like there is a lot of unknown that I’m going into but there’s enough where the convergence feels like it makes sense and I feel like this is meant to be.”