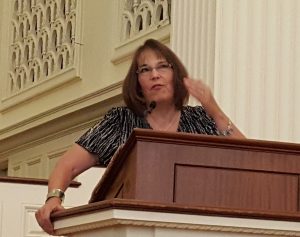 Susan Faye Wonderland has preached in many pulpits around the Synod of the Trinity region during her time as an associate and transitional executive. After 13 years in a leadership role at the Synod, Susan is retiring at the end of 2021.

In the last six years, the Synod of the Trinity has adopted a new way of governance, sold its 60-year-old building, migrated into a virtual office and tried to keep pace with the curve balls being thrown at faith communities by a worldwide pandemic. It hasn’t been an easy stretch, but through it all, this Presbyterian Church (U.S.A.) mid council has been able to flourish thanks to strong leadership that has navigated it through these unknown and choppy waters.

Susan Faye Wonderland has been the steady hand that has guided the Synod as its transitional executive for the past seven-plus years. Susan’s 13-year run at the helm of the Synod, which includes a five-year stint as the associate executive alongside Executive Bruce Stevens, comes to a close at the end of 2021, retiring from a region that saw her through childhood to ordination.

Forrest Claassen was elected as the Synod’s new executive following a unanimous vote at the Synod’s October Assembly gathering. Forrest, who begins his role on Jan. 1, comes to the Synod from the Presbytery of Los Ranchos in Anaheim, CA, where he is the co-executive and stated clerk. He’ll benefit from the groundwork that has already been done by Susan during her time as the transitional executive.

“We have shifted dramatically,” Susan said, looking back at her body of work. “We’ve moved to a more effective Assembly once a year. The Policy Governance shift has really helped us to focus, listen and ask of the presbyteries. The relationships are now differently active with the presbyteries in ways that can better help to encourage some partnerships and future work that very, very likely will soon lead to include more aggressive work towards leadership partnering and potential boundary changes.

“Our general communications with the presbyteries – our news work – has gotten a lot more regular and productive, i.e., telling the stories of the presbyteries to one another. It has become much more intentional.”

It’s just one of several significant changes that have occurred during Susan’s tenure at the Synod that she is particularly proud of as she heads into retirement. At the top of that list is the virtual office the Synod has incorporated since covid hit in March of 2020. It’s something that was not in the plans but was able to occur smoothly due to a push in that direction by Susan months and years prior.

“Ever since I stepped into the executive role, I’ve been moving us more and more virtual,” she said, “not so that we could leave the office but so that we could work anywhere and anyway. Leaving the office was really a natural progression, so the technical piece was not overwhelming. It takes a little bit of imagination and some different focus points. We had a call when we continued to try to live it and covid has been one of those factors. Quite frankly, it was covid that urged us to move on from the building sooner than we might have.”

The foresight to have taken some of these steps allows the Synod to be on solid ground as a shift in leadership occurs at the start of 2022. Considering how much change has occurred due to the pandemic, having the Synod ahead of the curve has been and will continue to be a blessing. That allows Susan to leave knowing things are well aligned for a new executive, who Susan is anxious to see dig in his heel when the calendar turns.

“I’m excited about Forrest coming on,” she said. “I think he has some gifts that are going to be really helpful. I think there is hard work that needs to be done.”

A foundation has been set for some of this future work that Susan is hopeful will continue going forward.

“I think the work needs to get more serious with regard to leadership, boundaries and whatever that’s going to look like,” she said. “To maximize the ability to serve congregations, I think the judicatories need to be more assertive about making change. To support the congregations and maximize local ministry, I think we need to be much more aggressive about making some changes in the way we do leadership, in boundaries and the way we do our presbyteries. That may mean changes on all fronts, synod and presbytery.” 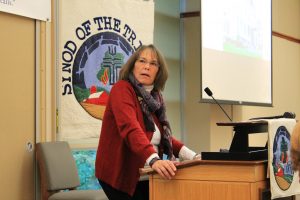 When reflecting on her time in the Synod and the work she has completed, Susan has plenty for which to be proud. But she’ll admit that some of the projects stand in front of others.

“I’m very proud of our presence and work during covid,” she said. “We worked together as a staff well, we trusted each other, we listened, and we sought to partner with presbyteries in places that made sense – naming things that needed to be touched on like technology and resilience and to partner in with some of the conversations around the racism pandemic. I’m very proud of our work on hate because I think that opened up all kinds of doors for us and for the region that have proved to be important. They have proven to be helpful types of things for the Synod to work on with the presbyteries.

“If we didn’t know it already, covid has helped us to recognize that there is just so much we don’t know, that we’re walking in a time when we’re experimenting and exploring. We try and we fail, we try and we succeed but we have to stick close to the ground. I think there are many folks who knew that beforehand, but I think we know it in a new way since covid.”

Despite the many highlights in Susan’s work, there have also been a fair number of obstacles that have come her way.

“A challenge has been trying to see clearly enough to help the Synod have a posture that was calling presbyteries or their congregations forward, rather than status quo,” she said, adding “trying to have a vision of what might be coming to help us all grow the tools and skills to get there.

Being able to have a feel for what the region needs and is experiencing has been a gift for Susan, who grew up in Bucks County not far from Philadelphia and who has marveled at the Holy Spirit bringing her home for this call. Her husband Ken is the pastor at Bensalem Presbyterian Church in the Presbytery of Philadelphia and will be retiring in early 2022 after 10 years there. Susan and Ken have purchased a house near Syracuse, NY, and will be moving there to be closer to the family of one of their children.

For Susan, who was ordained in the Presbytery of Philadelphia, it will be a return to New York where she served for eight years in the Adirondacks as pastor of the First Presbyterian Church of Warrensburg, N.Y., before spending 15 years with Ken as co-pastor of the Webb Horton Memorial Presbyterian Church in Middletown, N.Y. For 13 years of those years she was also on the staff of Hudson River Presbytery, serving in various areas of congregational resourcing and networking, particularly for education and youth ministry. She also served as the Interim Executive Presbyter for Lackawanna Presbytery from 2007-09 before joining the Synod.

As for what’s next, Susan hasn’t ruled out the possibility of returning to church work in some form but currently has no plans to dive back into that soon.

“There are things to be up to both in life and faith,” she said. “There’s some travel we want to do, some books I want to read. There are a lot of things I want to get to, and I can imagine that I’ll be participating in a church in new ways. Down the road, I can see us participating in the life of Cayuga-Syracuse Presbytery.”

Whatever is on deck for Susan, rest assured that she’ll make an impact wherever she lands. She’s confident that whatever is next will have its own set of obstacles and rewards, not unlike what has been happening in her Synod roles since 2009.

“For me, God’s presence is a constant and it has been very clear,” she said. “I walk with an attitude of trying to be open and ask for openness and eyes to see what might be the best way for us, for me. It’s not like God has put down a road sign. Through others and through conversations God has been leading me to lead the Synod in the ways that we’re going.”