Hikers partake of a weekly meal at the Presbyterian Church of the Mountain, part of the church’s outreach to those traveling the nearby Appalachian Trail.

Slightly north of the midway point of the Appalachian Trail is a place in eastern Pennsylvania called Delaware Water Gap. This scenic community that sits a stone’s throw from the New Jersey border is best known to hikers as a place they can relax, take a shower and spend the night as they make their way along the 2,174-mile trail that stretches from Springer Mountain in Georgia to Baxter State Park in Maine.

The friendly overnight Hikers Center, or hostel, that greets thru-hikers in Delaware Water Gap, a block from the trailhead, is the oldest such stop on the trail, having started in 1976. It’s a mission of the Presbyterian Church of the Mountain, something the congregation has embraced since day one.

“It’s an out-of-the-box ministry,” described the Rev. Sherry Blackman. “It’s a ministry of hospitality, a ministry that keeps the congregation healthy as we’re constantly reaching out to the stranger, looking outward rather than inward.”

When the Hikers Center opened 46 years ago, the Church of the Mountain had just 15 members. But this small group began by connecting with the hikers who were resupplying in town, taking them home for the night, feeding them and doing their laundry. The success of this outreach resulted in the church renovating its basement of the sanctuary a short time later, creating a refuge for these sojourners. Available is a shower, bathroom, bunk room that sleeps eight and a common area with couches and chairs. There’s also a lean-to to sleep under, and hikers are permitted to camp anywhere on the lawn, including a gazebo on the property.

“Sometimes I drive up the driveway and I see tents drying out, clothes being washed, clotheslines and tents everywhere. I love that,” Sherry said. “I love driving up the driveway and thinking, ‘Who’s here?’ We get people from all over the world, and on average host 1,000 to 1,400 hikers a year.

“It takes courage, stamina and dedication to hike the trail that is very challenging and takes about five months to complete. The hikers give each other trail names. When hikers walk without using their real names, there’s a certain anonymity that brings with it a willingness to be vulnerable and honest with each other. I think long-distance hikers live very authentically with each other when they are on the trail and they make life-long friends. There are no orphans on the trail, I’ve said. Hikers adopt one another and watch out for each other.”

Once a week for four months during the summer, volunteers from the Church of the Mountain prepare a potluck “Hikers Feed” on Thursday evenings. It gives the congregation a chance to interact with these sojourners and hear their stories.

“We listen to the stories,” Sherry said. “We do not proselytize; we consider hospitality our message. Inevitably, some conversations come up, but it’s never forced.”

Young and old, male and female find their way to the Church of the Mountain’s Hikers Center where they can camp in the yard for the night.

Sherry makes a point to connect with as many hikers as she can throughout the year, listening to the tales of their lives and why they have chosen to embark on their trek up or down the trail. These interactions are the focus of Sherry’s book “Tales from the Trail, Stories from the Oldest Hiker Hostel on the Appalachian Trail,” which is a collection of stories she gathered since coming to the Church of the Mountain as a solo pastor in 2014. The book was published in February, coinciding with the start of 2022 hiking season for northbound walkers.

“I wrote the book to celebrate the church’s longtime ministry and to show how a church needs to live and breathe in the community it exists in, which a lot of churches are trying to figure out right now,” Sherry explained. “And I wanted to write about what it means to be human, and how we all are searching for peace, for spiritual connection and to strip life down to the bare bones.

“People are hiking the trail for lots of reasons. They are grieving, trying to heal, working through trauma or often transitioning into a different phase of life. We have wounded warriors hiking the trail, people who have gone through a recent divorce, others who have lost loved ones.”

Sherry recalled a conversation she had with a middle-aged Canadian man who had hiked the trail 20 years earlier as he discerned what career path to take. He was hiking the trail a second time as he contemplated whether to stay married or divorce.

Two months ago, a man in his mid-20s shared with her how many young men were hiking the trail in search of a rite-of-passage into manhood as “there was no such ritual in our western culture,” Sherry recounted.

“There are a number of young women who are hiking the trail as they transition from college graduation to a career or before entering graduate school,” Sherry explained. “The Appalachian Trail is a place where people go to search out the meaning of their lives and discover what is next for them, what is their passion and purpose. Some say they just always felt compelled to accomplish this difficult feat, but there is no journey that is not also a spiritual pilgrimage.”

Another memorable encounter Sherry details in the book is in a chapter titled “Never Quit.” She tells the tale of an ex-Marine who lost his legs in combat and was offering truck support to a veteran who had suffered a serious spine injury and was slowly making his way up the trail.

“Jason had lost his legs but he never lost a sense of his own value, worth and dignity,” Sherry said of the ex-Marine.

She asked him if he used the shower in the Hikers Center, which has a narrow doorway and would be difficult for a person in his physical condition to navigate the opening. 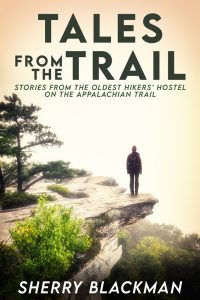 Sherry has also interacted with hikers who are taking the trek as a part of their recovery from alcohol or drug addiction. Clearly, the reasons are varied for hikers wanting to tackle all or part of the trail.

“The trail calls out to people, and they don’t always know why. But they go and they listen,” Sherry said, referencing author John Muir’s letter to his sister in the 1870s that read “the mountains are calling, and I must go.”

All told, the 230-page book (available through Amazon by clicking here and Barnes & Noble by clicking here) includes roughly 50 short stories of interactions that Sherry had with hikers.

“It’s not a real Jesus-ey book,” Sherry said. “The book is very intentional about being about the hikers and the church who serves them. There is definitely a spiritual thread woven throughout the tales. It’s part memoir, too, as I reflect about the all the angels we wrestle with in our lives.

“I’ve been a writer and a journalist all my life, and I continue to write for publications, like ‘Presbyterians Today’ and ‘Presbyterian Outlook.’  I’m intrigued with people’s stories, and everyone has one. I see my writing as an act of love, as a way to process and understand the world. I think I’m a better minister because I am a writer.”

Sherry’s next book called “REV-IT-UP, Tales of a Truck Stop Chaplain” is due out the end of this year and recounts another one of her passions – being a truck stop chaplain in nearby New Jersey, which she does along with being a chaplain for the Pennsylvania State Police. Her most recent book, just released “Letters to Our Daughters,” is a collection of lessons and insights she is passing on to all daughters everywhere, of every age.

“‘Tales from the Trail’ has struck a chord in people I never expected,” she said. “People are intrigued by others and want to learn about their own lives from other people’s stories — how did they survive such a loss, or tragedy or move on? There are those who love to reminiscence about hiking the trail and those who dream of such a great accomplishment.”

The accounts in “Tales from the Trail” are not only meaningful and powerful for the reader, but they are also a way to leave the story of this one church for posterity, a written account of the legacy of the Church of the Mountain.

“There’s nothing more interesting to me than people and their stories,” Sherry said. “I will always celebrate what this church has taught me and others about the power of hospitality, and how one church can have a dynamic presence through the world without ever leaving its neighborhood.” 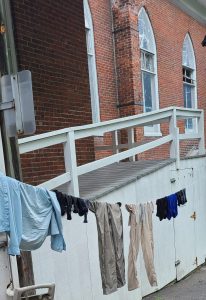 Hikers can wash their clothes, take a shower and relax at the Church of the Mountain’s Hikers Center in Delaware Water Gap, PA.