The Rev. Sam Hwang feels strongly that things like racial justice should be part of sermons on a Sunday morning. And in the wake of the unrest in Ferguson, Mo., the preacher at First Presbyterian Church in Williamsport hasn’t been shy about sharing his feelings on the subject.

“It’s on TV all the time. Everyone’s talking about it,” he said. “There are protests everywhere. Part of my frustration was that Christians are not talking about this and not really bringing this conversation into the context of the church and trying to process it and understand it from a Christian viewpoint.”

While Hwang has been integrating racial topics into his weekly dialogs, he felt more needed to be done in the Williamsport area. So, about two months ago, Hwang began planning a forum on racial justice and harmony that was eventually held at his church in mid-January to address some of the growing concerns and create an environment where these issues could be discussed. 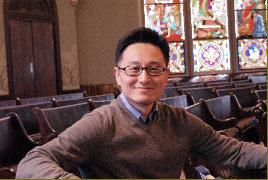 “My sense is that things like this aren’t happening in the church other than in a very structured setting because pastors are hesitant in the sense that they don’t want to bring any divisive issues into the church,” Hwang said. “You already have problems in the church. Why bring in these very divisive issues that would trigger strong emotions?

“I’ve been telling people that social justice is very important to me, and I incorporate that into my sermons and into all my teachings and my conversations with the people, and I realize that this community here, this region, is very conservative.”

Word quickly spread that the First PC congregation was hosting such a forum, and it grew into a more formal event, with pastors calling to inquire about it.

“It was a good turnout, but I was kind of expecting a little more,” said, Hwang, who has been preaching at First PC for close to six years. “It was a little smaller than I anticipated, but the quality of conversation was really, really good. Very constructive.”

The 90-minute forum occurred on Jan. 13, and close to 30 people from First PC and the community turned out to hear Hwang and three other people on his panel share their feelings and address the topic of racial discrimination. The panel consisted of the Rev. Elizabeth Affsprung, the Rev. Henry Hopper and Richard James. Affsprung and Hopper are from the Presbytery of Northumberland who understand the deeper issues of racial justice, making them obvious choices to speak on this topic. James is a vocal member of the community who has ties to many civic organizations in Williamsport and has written columns for the Williamsport Sun Gazette and the now defunct Williamsport Guardian. Several black pastors were invited but were unavailable to attend. 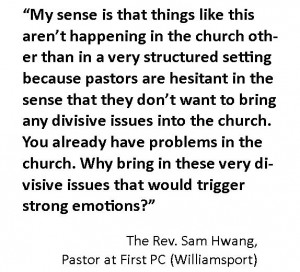 The audience included a 50-50 split between First PC members and the community, which featured a program director from the Williamsport YWCA, members from neighboring churches, pastors from other denominations and retired and currently serving African-American pastors.

“One member of our presbytery (Northumberland) who has been here since the early ’90s said he’s never seen anything like this, this kind of discussion taking place in our presbytery,” Hwang said. “He thanked me and said this is long overdue. I said I’ve been doing this for six years. I’m very thankful to my congregation because they’re very understanding, very receptive.”

Hwang, whose church is a mostly-white congregation, is Korean-American and feels all social issues are important to everyone regardless of race and color.

“Yes, if you get down to it, it is a black-and-white issue, but the larger issue is not black and white, it’s about discrimination and prejudice,” he said. “And that affects everybody. Korean-Americans and other minorities, they should really think of this as their issue as well, not just for the blacks and the whites. I feel this is very important that there’s a sense of solidarity and understanding among people, especially for other minorities.”

Discussion was limited to the panelists in order to keep emotions in check. There was time at the end for the audience to interact with the panel, however.

During the discussion, panelist James shed light on a housing issue in Williamsport. He explained that there are some discrepancies in the data within the city regarding who is getting housing benefits. Deeper conversations touched on subtle ways racial and economic injustice is being spread throughout the country, with some pointing out that even though economic injustice is actually a bigger problem in as far as the number of people affected, it shouldn’t absorb the problems associated with racial injustice since it would inevitably downplay the problems that are unique to racial injustice.

There was a sense that another discussion should be held in the future. While no official plans have been made, Hwang was open to the idea of holding a second such forum down the road.

“I certainly feel that it shouldn’t be a one-time thing,” he said. “There are so many deeper issues related to racial justice, so I’d like to get into deeper issues and have a more focused conversation next time.”

As far as improvements, Hwang would like to get the word out a little earlier about the forum but didn’t think that the Tuesday at noon time was a bad slot to hold this type of event. In fact, he pointed to another reason that might have kept people away.

“The nature of the conversation, it can be very divisive, emotional, and people have very strong beliefs about this when it comes to racial issues,” Hwang said. He added later, “I think we need to be very intentional to have this type of conversation even though it makes us feel very uncomfortable, even though it can be divisive. I believe this is a life-and-death issue. Literally. People are dying and lives are being destroyed. Why aren’t Christians talking about it? Why aren’t Christians doing something about it?”

Building upon what happened in mid-January is the main goal for the next forum, as well as trying to correct any injustices that are occurring in the Williamsport and surrounding communities. Hwang has an idea about how to approach that subject.

“I was reading an article … and one suggestion was we need to train ourselves to see the people that we tend to see in a negative light and try to see them as good people, as heroes,” he said. “He was offering this argument from a neurological dimension and how we can train our brains to think and act a different way. … That kind of ties into what the scripture says, especially about the Good Samaritan. If you look at the parable of the Good Samaritan, that’s what it’s all about. That’s an oxymoron to say ‘Good Samaritan.’ Samaritan people are bad people, but this is ‘Good Samaritan.’ There’s a very strong theological connection to what the scientists are saying that we should do to fight racial injustice.”