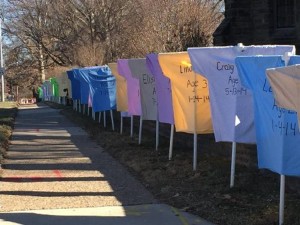 Some of the 175 T-shirts are displayed as part of the ‘Memorial to the Lost’ at Overbook Presbyterian Church in Philadelphia.

Last year, 203 people were killed by guns in Philadelphia. To put that number into perspective, the entire country of Japan averages less than 50 gun deaths per year. Places like Germany, Italy and France average less than 150 homicides by guns in a year, and Canada is under 200. On the other hand, the United States averages more than 10,000 in a year’s time, a staggering figure. Because of this problem in our country, awareness toward gun-related deaths has never been higher.

To ensure that the momentum on this subject doesn’t slow down, and to also guarantee that gun violence in its own backyard remains front-and-center in people’s minds, Overbrook Presbyterian Church in Philadelphia is displaying the names of 175 people from its city who lost their lives through this senseless act. The “Memorial to the Lost” consists of 175 T-shirts hung on stakes that have inscribed on them the names, ages and dates of death of victims lost through shootings in Philly in 2014. There were actually 203 people killed by guns last year in the city, but not all of the information for those remaining 28 deceased is available, thus leaving the number of displayed shirts less than the actual figure.

“It’s one thing to know 200-plus people were shot, it’s another thing to see it en masse,” said Overbrook PC member Jeff Bowker, who was instrumental in helping to bring the “Memorial to the Lost” to the church. 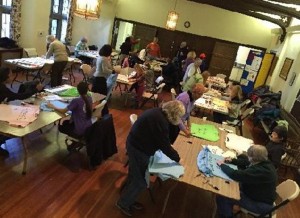 Members of the Overbrook PC prepare the T-shirts to be displayed on the church’s lawn.

“This is a visual depiction of the number of deaths,” she said. “You can say there were 203 deaths. That’s a lot. It’s a way to visualize that this many people were killed by guns last year in this city.”

Bryan Miller, the Executive Director for Heeding God’s Call, which is in charge of the T-shirt memorial, said there is some shock value involved.

“We believe that people see the T-shirt memorial looking like a graveyard,” he said. “It has a great impact. It lets people know the toll.”

Bowker learned of the memorial as he interacted with the Heeding God’s Call group while attending a demonstration on gun violence awareness. Heeding God’s Call is a “faith-based movement to prevent gun violence,” according to its website. “We unite people of faith in the sacred responsibility to protect our brothers, sisters and children.”

“This is not about gun control, it’s about reducing gun violence,” Bowker said. “It’s a cause I believe in.”

Rozmiarek added, “They’re focusing on opposing gun violence, not gun ownership, and that’s one thing that they make very, very clear. They’re witnessing against gun violence and the illegal sale of guns. They’re not trying to take on the NRA and put them out of business.”

The T-shirt “Memorial to the Lost” was created in 2013 by two churches, one being the Presbyterian Church of Chestnut Hill. The memorial moves from place to place throughout the year, with seven other organizations so far signed up to host the memorial in 2015. An exact schedule has not been mapped out, and churches aren’t the only ones that have shown interest. Places like the University of Penn and Villanova University are among organizations that have shown interest, and the memorial has landed in two public parks. 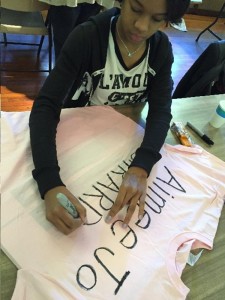 An Overbrook PC volunteer writes the name of a person who was killed by gun violence in Philadelphia in 2014.

Because of Overbrook’s location in the city of Philadelphia, it was the perfect spot for the T-shirt memorial to be displayed.

“If you live in the city, it’s all around us,” Bowker said, referring to gun violence. “There was a shooting two or three weeks ago where we used to hold an after-school program.”

Overbrook is scheduled to have the memorial on its property for three weeks and held a special outdoor service to dedicate it. Normally, organizations take two weeks to display the T-shirt memorial. There are times during the year when a week is needed to wash the shirts, but Miller said it has never had a time that the memorial wasn’t planned for a location.

Bowker pushed for Overbrook to host the memorial first and was granted that wish. That meant Overbrook had to purchase the T-shirts and was in charge of having the names, ages and dates of death written on them. Bowker volunteered his church for the work, and in a matter of two hours the congregation came together and completed the work.

“I was really impressed that nearly 50 people showed up on a Saturday morning,” Rozmiarek said. “It makes a certain impact to see all those people working, writing on shirts, 4-5 people at a table. Kids, elderly; our oldest volunteer was 96 years old. … It made an impact.

“When you’re writing someone’s name on a shirt, you’re realizing that this is a person who is dead due to somebody having a gun in their hand at the wrong time. I think everybody felt really engaged and wanted to be part of it.”

The money for the T-shirts was funded by Overbrook’s Mission Outreach Committee, but Heeding God’s Call does collect donations for the memorial. Family members of the deceased can also receive the T-shirt of their loved one. The Presbytery of Philadelphia has given “significant monies” through grants to Heeding God’s Call during the last three years, according to Miller.

The memorial’s overwhelming presence has created some positive emotion from the community, Rozmiarek said. 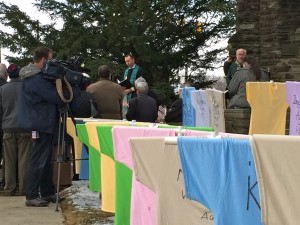 The Rev. Wallace Bubar speaks during a ceremony to dedicate the ‘Memorial to the Lost’ at Overbrook PC.

“I’m a little bit surprised there’s not been a whole lot of reaction within the neighborhood,” she said of the memorial. “It’s a pretty close-knit neighborhood and people like to know what’s going on. There has been absolutely no negative responses at all.”

Maybe people are just taking it all in. After all, it is undoubtedly a pretty gripping scene to see close to 200 T-shirts hanging in the lawn of a church pointing out those who have died from within the community by gun violence.

“It’s raising awareness of the senseless deaths,” Rozmiarek said. “A 3-year-old kid sitting on her front porch having her hair braided is killed by someone in crossfire. … These T-shirts show how many people died in one year in one city.”

Note: Anyone interested in hosting the T-shirt Memorial for the Lost can email Heeding God’s Call at info@heedinggodscall.org or call (267) 519-5302. There is also a chapter in Harrisburg that can be reached by email at info@heedingharrisburg.org or by calling (717) 461-3540.