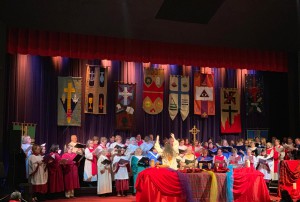 A joint worship choir performs during a March celebration of two centuries of Presbyterianism in Kanawha Valley, WV.

There’s been breakups and mergers, fires and a civil war. Through it all, Presbyterians have continued to thrive in the Kanawha Valley in West Virginia for the past two centuries.

A celebration of the rich history of Presbyterianism in the Kanawha Valley is occurring in 2019, highlighted by a Sunday morning gathering in March that involved nearly 20 Presbyterian congregations from the area and an estimated 600 people who turned out for the worship service in downtown Charleston.

“It was definitely a highlight of my ministry,” said the Rev. Patterson Lyles, pastor at Kanawha United Presbyterian Church. “It was very heart-warming and uplifting to see that (600 people in attendance), with churches dwindling across the board everywhere these days. The Lord’s not done with us yet.”

Kanawha United is one of three churches, along with First Presbyterian Church of Charleston and Kanawha Salines Presbyterian Church (which is affiliated with the Presbyterian Church in America denomination), that traces its roots to 1819. That’s when renowned Presbyterian pastor Henry Ruffner decided it was time to find a stable place of worship after holding Sunday worship in places like the local courthouse, a one-room schoolhouse and people’s homes. The new Mercer Academy had opened the previous fall, so a second-story classroom became the new home for the Kanawha Presbyterian Church on March 14, 1819.

“Presbyterians were a powerful force in the beginning of Charleston,” Patterson said. “We’ve always been part of the life here in Charleston.”

It was that March date that led to March 17, 2019, being chosen as the Sunday for the large gathering of Presbyterians at the Charleston Coliseum Theater. Presbytery of West Virginia General Presbyter Ed Thompson delivered the sermon that morning for worship, which also included communion and a music program with a combined choir. 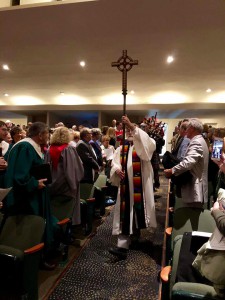 A procession kicked off a 200th anniversary celebration in Charleston, WV.

To commemorate the actual anniversary, a Charter Date Dinner was held at Kanawha United Church on March 14, when roughly 60 people from the church attended the meal and learned about the church’s history. The church also hosted the Presbytery of West Virginia’s meeting in February to help kick off the year of celebration. As for the rest of the year, among the highlights include a joint organ concert on June 2 at First Presbyterian Church of Charleston, which has two organs, thus allowing for two organists to perform. Two Sundays later, an organ concert will be held at Kanawha United as part of the city’s annual “FestivALL.”

A Bicentennial Homecoming will wrap up the year’s festivities on Sunday, Sept. 22, when people who have been part of the church in the past will be invited back to join in the celebration. With Charleston at one time being a booming salt-mine town, a gathering following the morning worship service will be held at a local salt-works farm to provide a historical tie-in for the congregation. The creation of a time capsule is also planned for the congregation sometime in the fall.

The Kanawha Church has been affected by two fires during its history. It’s first meeting space at Mercer Academy was destroyed by a fire. The school was rebuilt, but by 1830 the congregation decided to construct its own building at the other end of the school’s property only to have the inside of that building be damaged by another fire in 1842. The interior was rebuilt, and the congregation remained there until a split occurred after the Civil War.

In 1861, the Presbyterian Church divided over the issue of slavery and split into Northern and Southern Assemblies. Fearing a division among the congregation, the Kanawha Church decided not to formally address the split until 12 years later when a vote was finally held on which assembly the congregation should join. The 1872 vote revealed 23 members who sided with the Northern Assembly, and they broke off and started their own congregation. The smaller group lost the building but kept the Kanawha church name, while the larger group became the First Presbyterian Church of Charleston, which is also celebrating its 200th anniversary this year because it shares its history with the original Kanawha Church. 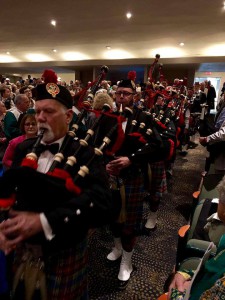 Bagpipers enter the sanctuary in Charleston, WV, that celebrated 200 years of Presbyterianism in Kanawha Valley.

A building for Kanawha Church that took five years to complete due to economic downturns and other issues was finally finished in 1885, making it the oldest existing sanctuary in Charleston, according to church historian Richard Hartman. In less than 10 years, about 200 members were added to the church’s rolls. Shortly after the turn of the century, the congregation called upon famed stained-glass window creator Tiffany Studios in New York to create some masterpieces for its church building. There are six Tiffany windows plus nine other stained-glass windows created by other artists that adorn the church.

“In the back of the church there is a large rose window plus a tripartite window, which is three windows together depicting one scene. It represents some of the best examples of the techniques that Tiffany designed,” said Richard, who is also an adjunct history professor at West Virginia State University. “These windows are registered with the Morse Museum of American Art in Winter Park, FL, and represent some of the finest ecclesiastical art of any period.”

In 1970, Schwamb Memorial Presbyterian Church, which had been established by the Kanawha Church in the 1890s, had to be torn down because of the construction of an interstate highway. The congregation merged with Kanawha, and the body agreed to change its name to Kanawha United Presbyterian Church. In 1975, a stained-glass window that had been prevalent in the Schwamb Church was installed in the Kanawha building.

It all adds up to 200 years of Presbyterianism for “the little church that loves” in the Kanawha Valley that has been welcoming and inclusive for the last two centuries.

“We wouldn’t be here without God’s presence and guidance through the troubled years after the war,” Patterson concluded. “At one point we were down to 16 members. We have stood the test of time, we’re still here and believe that God has a purpose for us and our other churches. We still believe that God has work for us to do.”