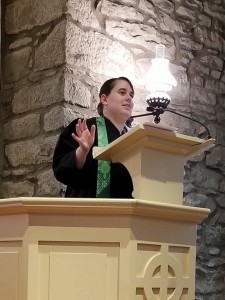 For some pastors, it can take years until they find the right fit with a congregation. In the case of the Rev. Alina Kanaski, she not only found a congregation within two years of graduating from Pittsburgh Theological Seminary to call home, she has been asked to lead a second congregation as well – and they’re in two different denominations.

Ordained Presbyterian, Alina is the pastor at Chartiers Valley United Presbyterian Church in Carnegie, which is in the Pittsburgh Metro Area. About a mile away, she also presides over Good Shepherd Lutheran Church, making for a unique situation that Alina is relishing and plans to continue for the foreseeable future.

“I really like it,” Alina said. “Having this Lutheran church where I really wasn’t as comfortable with the polity and the worship in the way that I would have been in a Presbyterian church has kept me very open and in a learning position where I’m asking a lot of questions and observing. It’s very helpful and was definitely brought over to the other as well. It’s a really good way to approach starting at a new church.”

After fulfilling her ordination requirements at the Presbytery de Cristo in southern Arizona following her graduation from Pittsburgh Seminary in 2016, Alina spent a year doing pulpit supply before an opportunity came up that she couldn’t resist. She was at a gathering at the seminary and heard about a shortage of pastors in Lutheran churches and decided to see what was out there for her in that denomination.

One thing led to another, and she was eventually matched up with Good Shepherd. When she approached Pittsburgh Presbytery about the opportunity, the presbytery felt she also needed to be involved with a Presbyterian church in order to be ordained in that denomination. That’s when the opening at Chartiers Valley became an option for Alina, resulting in her dual role at the nearby churches.

It’s been a fairly seamless transition for Alina, who celebrated her one-year anniversary as the pastor of both churches in September of 2018.

“I’m lucky,” she admitted. “My Lutheran church, they had done a lot of ecumenical work in the past, especially worship-wise, and I think they are just very flexible overall. So, they were fine with me not really knowing what I was doing at first,” she added with a laugh.

Alina praised the Southwestern Pennsylvania Synod of the Evangelical Lutheran Church in America for its role in her dual leadership situation. They have been “so helpful, welcoming and supportive,” she said.

Alina’s Sunday mornings begin with a 9:30 a.m. service at Good Shepherd before she makes her way to Chartiers Valley for its 11:15 a.m. worship. She normally preaches the same sermon at both places, but there are some differences in the two denominations’ styles that she must be consciously aware of every Sunday.

“The hardest thing is the Lord’s Prayer,” she said, “because one uses ‘debts’ and one uses ‘trespasses.’ The sanctuaries feel different, and I wear a white robe for the Lutheran church and a black preaching robe at the Presbyterian church, so for the most part they are demarcated enough that I don’t get too confused.” 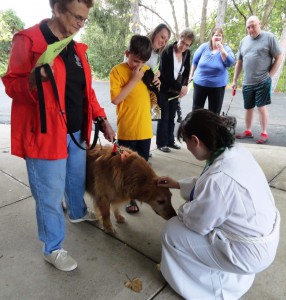 Rev. Alina Kanaski offers a prayer for a dog during the annual blessing of the animals service at Good Shepherd Lutheran Church in Pittsburgh.

Alina spends most of her week at the Lutheran church as she is employed there three-quarter time and one-quarter time at Chartiers Valley. In fact, her only designated office hours at the Presbyterian church are when she attends its weekly choir practice. She admits that hospital and home visits are about the same for both congregations, which have active membership numbers of 25 (Chartiers Valley) and 85 (Good Shepherd).

“I spend more time doing administrative stuff for the Lutheran church,” she said. “I consider my service times split 50-50, just because I’m preaching at both.”

As an added bonus, bi-monthly Bible studies are held jointly between the two churches, with each hosting one time a month.

“We get pretty consistent attendance from both churches,” Alina said.

Having the same pastor and sharing in a Bible study has definitely brought these two neighboring congregations closer together.

“They had a few connections but, in true Pittsburgh fashion, were in different areas and didn’t interact that much,” Alina said. “The people that come to Bible study know each other. For the first few years we were alternating Christmas eve (service) times because we both wanted the same time. We would invite people to the other one if it didn’t work for them. We’d get a little bit of crossover from that. And there was a lot of crossover at my ordination. I’m happy with where they are right now. They’re more aware of each other than when we started.”