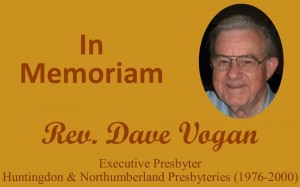 Dave Vogan was born in a Presbyterian manse in Greensboro, VT, in 1931, and his father was a Presbyterian minister. While it’s easy to say he was a “cradle Presbyterian,” his affection for the denomination lasted way beyond diapers. Not only would he end up pastoring at the First Presbyterian Church of Bellefonte, PA, for 13 years, he would go on to serve as the executive presbyter for both the Huntingdon and Northumberland presbyteries for another 24 years.

“Dave Vogan was the best kind of presbytery executive to follow,” said the Rev. Joy Kaufmann, who is the current general presbyter at Huntingdon Presbytery. “He was always gracious and supportive, even about those situations we were not able to fix.”

Dave joined the church triumphant on Thursday, Sept. 26. He was 88. He was preceded in death by his wife, Janet, and leaves behind two sons, five grandchildren and three great-grandchildren, not to mention many lives he touched during his service in northern and central Pennsylvania.

“In Northumberland Presbytery, Dave Vogan long ago moved to the status of legend,” said the Rev. Steve Cureton, the presbytery’s executive presbyter. “His legacy runs strong for many of our older members and retired pastors. Though he retired 19 years ago, his name still floats through our meetings and gatherings, and I received more than one phone call and email requesting information on his health and well-being. As one honorably retired pastor put it, ‘In my mind, Dave Vogan was always the fairest, kindest and most decent man there could be.'”

“Dave has been retired long enough that many of you reading this will not have known him,” Joy added. “If that is the case, you missed a really fine person. If you did know him, you know he left our presbytery in very fine shape for those of us who have come after him. He never met a pastor or an elder he didn’t like (although there were some behaviors of which he wasn’t so fond!).”

For two years until 1954, Dave served in the United States Army, working with Army intelligence in Frankfurt, Germany, before being honorably discharged as a corporal. With a journalism degree from Westminster College in New Wilmington, PA, under his belt, Dave went on to work in the newspaper business as an advertising salesman in Ohio before becoming the Director of Chistian Education at First Presbyterian Church of New Castle, PA. That led to three years of education at Pittsburgh Theological Seminary where he attended classes alongside Fred Rogers, the creator and star of the famed children’s television show “Mister Rogers’ Neighborhood.” Following his 1962 graduation and a year of study in Scotland, he began serving as the pastor at the First Church of Bellefonte.

In 1976, he took over as the executive presbyter of both the Huntingdon and Northumberland presbyteries, and remained in that role until 2000. That territory went from the New York State border to the Maryland border, encompassing about a quarter of the land in Pennsylvania.

“He, having left both presbyteries in very good shape upon his retirement, also wanted to foster the greatest possible health in both presbyteries in more recent years,” Joy said. “I valued his mentorship, his friendship, his clear thinking, his kindness and his evident love for Christ and His Church.”

A celebration of Dave’s life will be held Saturday, Oct. 26, at 3 p.m. at the First Presbyterian Church of Bellefonte. The Synod of the Trinity is thankful for Dave’s work and service to the region and sends condolences to his family and friends.