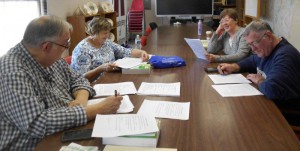 Members of the Presbytery of Redstone’s Addiction Ministry Network discuss a seven-session curriculum it created that focuses on opioid addiction and how the church can help bring the subject ‘Into the Light.’

Fact: The opioid crisis is the worst addiction epidemic in American history, according to Time Magazine.

Fact: West Virginia, Ohio and Pennsylvania are among the top five states where opioid overdoses occur. (The other two are Kentucky and New Hampshire.)

These are staggering facts and figures that revolve around the three states that make up the Synod of the Trinity region. And they are not to be taken lightly. That’s why the Presbytery of Redstone went out of its way to create an Addiction Ministry Network that is raising awareness and providing resources to help combat the problem. In 2017, the Redstone group created a Lenten devotional titled “Into the Light: Join the Conversation” that aimed to get people in the church talking about the issue. Around that same time, it organized a worship service titled “Into the Light: A Service of Healing and Hope” that featured stirring testimonies by people who were touched by addiction, again with the goal of raising awareness toward the misuse of opioids.

Staying with that theme, the Addiction Ministry Network has compiled a seven-session curriculum titled “Into the Light: Christian Responses to Opioids” that can be used in several different settings, from a Sunday morning worship service to a week-night small-group Bible study. The 62-page study guide includes everything from specific scripture texts to discussion questions to suggested hymns. (For more information on the curriculum, email redstonetogether@gmail.com.)

“We’re trying to establish the Biblical foundation of why Christ is calling our churches to reach out to people, particularly people recovering from substance use disorder,” said the Rev. Lee McDermott, a Redstone pastor who helped create the curriculum. “It tries to get churches to understand that dealing with people with an addiction is not any different than dealing with people with other health issues or diseases who need healing or people who are dealing with grief and loss.

“All of us, in some way or another, have things throughout our life that we’re trying to recover from. But when it comes to addiction, there’s things like shame and stigma that prevent people from realizing that the church can be of help to them. The church itself, being full of people, tend to be sometimes harsher to people with addiction than other problems.”

Rev. Sue Washburn, the pastor at Reunion Presbyterian Church in Mt. Pleasant, PA, hopes the curriculum will help congregations be more open about opioids and provide examples on how they can minister to their communities about this issue.

“I find it helpful to have a framework for discussions that might be challenging or bring up strong opinions,” she said. “I’m hoping that churches in communities that have high addiction levels can use the curriculum to find ways to talk about the issue and how God may be calling them to respond. 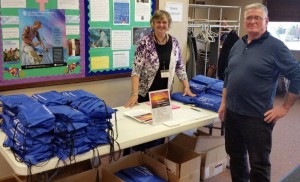 “Our goal has always been to bring the challenges of addiction into the light instead of allowing them to grow and fester. The reality is that addiction touches many people in our churches, but too many people are ashamed to admit it. My prayer is that by having a resource, more church leaders will start to talk about addiction in ways that can be helpful to families.”

The curriculum draws off the same “Into the Light” metaphor as the Lenten devotional and corresponding worship service from two years ago.

“These people are not any different than folks dealing with a whole host of issues that make them feel wounded, broken, lost in the world and lost in the darkness,” Lee continued. “That’s why we use the imagery ‘Into the Light.’”

In connection with the curriculum, the Synod of the Trinity is teaming up with Lee and others who had a hand in the writing of the study guide to provide a four-part webinar on consecutive Thursdays in May. Scheduled for 7 p.m. from May 9 to May 30, the webinars will focus on four of the sessions highlighted in the curriculum. They are as follows:

If you are interested in learning more about the Synod’s May webinar or want to attend, email Synod Communications Coordinator Mike Givler at mgivler@syntrinity.org.

“The Synod covers a broad geographic expanse,” Sue said, “and I’m hoping that the webinar will bring together folks who can learn together and share ideas for ministry. So many church leaders have been dealing with the issue. It will be good to discover how they are handling everything from the stigma of addiction to conducting funerals for overdose victims. I expect we will all learn from each other.”

Lee, the yoked pastor at McClellandtown and Grace Chapel Presbyterian Churches in Fayette County, PA, is well-versed in this field. For 20 years prior to entering the ministry field, he worked as a counselor in a drug and alcohol rehabilitation center.

“It’s a way to get this conversation about addiction more widespread throughout the whole Synod,” Lee said of the webinars. “We want to get this out not just in Redstone Presbytery but in all the presbyteries in the Synod. This is an attempt to hit other presbyteries and other churches in the Synod to start talking about it.”

The curriculum came about after the Presbytery of Redstone received a grant from the Westmoreland Drug and Alcohol Commission that allowed it to purchase Life Recovery Bibles and corresponding workbooks for the churches in the presbytery. The curriculum helps the congregations better understand the Bibles and workbooks.

“Creating a curriculum is something I always wanted to do, I just never wanted to it by myself,” Lee said. “I wanted a group of people like we have working together to do it.” 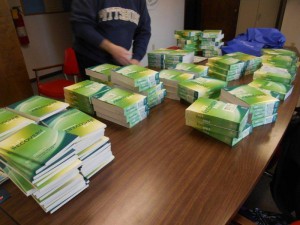 The Presbytery of Redstone received a grant from the Westmoreland Drug and Alcohol Commission that allowed it to purchase Life Recovery Bibles and corresponding workbooks for the churches in its presbytery.

“I have a lot of experience in drug and alcohol, but I also realize that my point of view of things may not match up with what the point of view of people in most of the churches is. I have ways of explaining things that maybe doesn’t work, but getting some feedback, we might find a different perspective on how to present this to people so that they better understand it.”

An opioid is defined as a pain-relieving drug made from the poppy plant, but they can also be created in a laboratory. The most common opioids are morphine, heroine and fentanyl, and most opioids are prescription medications used for things like dental surgery.

The fact that the states that comprise the Synod region are among the highest in the nation in opioid-related incidents is staggering. But according to Lee, each region of the country has its own issues that it’s dealing with.

“It has to do with availability and cost,” Lee explained. “Texas doesn’t have, compared to PA or West Virginia, as much of an opioid problem. Their main problem is methamphetamine. That’s a big issue in Texas. It tends to flow that way.”

No matter how you slice it, the opioid epidemic is one that needs everyone’s attention, and that commitment starts in the church.

“One of the things we tried to do in the curriculum was to include stories of people who had experiences that pointed us to what God’s calling us to do,” Lee said. “We’re trying to show how God is working either in our own lives or in the lives of others that we witnessed because we want to get people engaged in the stories.”

And, hopefully, that engagement will lead to a reduction and eventual end to an opioid addiction problem that’s of high concern for those in the Synod of the Trinity region.

Note: If you are interested in more information about the