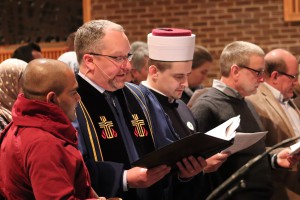 Jeff Gibelius, the pastor at Second Presbyterian Church of Carlisle, PA, worships with others from the community during an Interfaith Thanksgiving celebration in November.

For whatever reason, there are communities in southcentral Pennsylvania that seem to be on the radar for white supremacists and hate groups such as the Ku Klux Klan. In fact, in the 1920s, Lancaster County – known for its conservative population headlined by the Amish – had one of the highest membership rates for the KKK. More recently, in 2000, the Church of the American Knights of the KKK brought nearly two dozen hooded demonstrators to downtown Carlisle.

Fast forward nearly two decades and, despite what many people might perceive as advancement in racial issues over the years, the KKK and its propaganda were back in the news in February when flyers from the Loyal White Knights of the KKK were discovered on the property of residents in Carlisle.

“There’s a history of Carlisle being targeted,” said the Rev. Jeff Gibelius, pastor at Second Presbyterian Church of Carlisle. “I don’t think there are roots here. I don’t think it’s good soil for this, but for whatever reason we get targeted from time to time.”

When Jeff read about the most recent incident, it immediately struck a nerve with him. He knew something had to be done, and because of his position in the community, Jeff knew he had an opportunity to start something positive in the face of this hate-driven event.

“Carlisle needs to stand together here,” Jeff said, reflecting on his thoughts when reading about the incident. “This is not something for the African-American community to protest, it’s the majority community – the white community – that needs to say something, too.”

Jeff reached out to some local leaders and other clergy in the area to start the conversation regarding a response. While some wanted immediate action, others felt that a well-planned rally was also needed to help raise awareness in the community. A few road blocks occurred in trying to quickly secure a space to hold a demonstration, and because many of the community leaders and clergy did not know one another, it took some time to get organized.

A rally was eventually held 10 days after the KKK leaflets were distributed. Close to 100 people turned out on a frigid night on the steps of the Old Courthouse in Carlisle to hear speakers call for action and togetherness against any group that was trying to cause a division in their community.

“Sometimes, a rally against something in its best sense becomes a rally for something,” Jeff said. “In this case it was a rally for unity. We called it ‘Carlisle Stands Together.’ The KKK pamphlets were directed at the African-American and Jewish populations in general. That was hate speech. We wanted to have an evening of some love speech, some unity speech to show people what we’re for. When you attack one, you attack all of us, and we’re gonna stand with each other.” 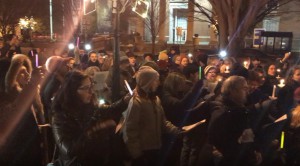 A rally organized by clergy in the Carlisle area was held in the community following the distribution of KKK fliers.

African-American, Jewish and Muslim speakers all had a part in the rally, which also included prayers spoken and songs sung in native languages. It was all very positive and worthwhile, but it needed to be just a starting point.

“What came out of the rally is the need for stronger communication and connections within the Christian community,” Jeff added.

In Carlisle, there are two clergy associations – the Black Ministers Association and the Carlisle Ministerium. There are no black pastors in the ministerium and vice versa. There are also two American Legion posts in Carlisle, one of color and one that is predominately white.

“A bunch of us said this is not acceptable, this is not the kind of community we want to be in,” Jeff said.

A short time later, an inter-racial clergy breakfast was scheduled in which 18 pastors attended. It was a great segue following the rally.

“The energy in the room was amazing,” Jeff recalled. “It was loud, raucous and had lots of laughter. We spent 10 minutes in pairs praying for each other. We committed to meet three times a year as Carlisle Clergy United. This is not a programming group. This is a relationship-building group where clergy can get together from different backgrounds and pray for each other. The theory is if pastors get really comfortable with each other, that will eventually lead to congregations saying, ‘Hey, let’s invite the AME (African Methodist Episcopal) Church to our annual picnic.’”

At Second Presbyterian Church where Jeff is pastor, the congregation is bringing in Ann Van Dyke, a volunteer for the Harrisburg-based Community Responders Network that works against hate and bias. At a conversation called “Beyond Bias, Blinders and Rose-Colored Glasses,” she will speak about the seriousness of the issue of hate groups and what congregations can do in response to the groups’ actions. 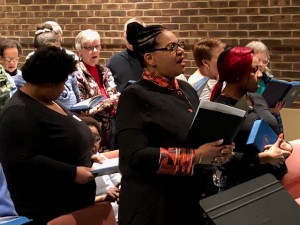 “It’s the idea of helping us all see the biases, the blinders and the rose-colored glasses that we wear,” Jeff said. “Sometimes we negatively stereotype. Sometimes, frankly, we positively stereotype groups of people – we give them way too much credit – and that does a disservice, too, to the child of God within. That is an education piece that we’re doing for ourselves to say, if we want to continue to engage across race and religion – to Jewish and Muslim relations – we need to know what biases we’re bringing into the conversation so we can take those off, remove some of those blinders when we go to dinner at the mosque.”

All of these outreaches are helping to bring the community of Carlisle closer together, one that outside groups target from time-to-time in an effort to break them apart. But because of the work being done by the clergy in that area, that will be harder and harder to accomplish, and Jeff is one of the reasons for that.

“God has led me to connect with other like-minded people that I didn’t even know before,” Jeff said. “God has given me a voice and courage to speak about these things. God has been preparing me for this time and this calling. I find such joy in working with people across race.

“It takes time and work, but there is great payoff, too, because your world expands through interracial and interfaith work, and you often understand your own traditions better.”