Matters of racial injustice come front and center at Trinity-Berwyn 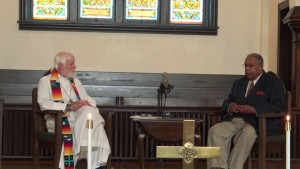 Pastor Howard Friend had prepared a sermon for Father’s Day, but it just did not come together. Something was pulling him to go in a different direction that Sunday at Trinity Presbyterian Church in Berwyn, PA. So he did.

With racial tensions escalating in nearby Philadelphia and across the country following the death of an unarmed Black man, George Floyd, at the hands (or knee, if you will) of a Minneapolis police officer, Howard was led to bring a message of justice and equality into his predominantly white congregation. And he knew just who to call to help him bring the point home.

On June 21, Howard and Vernon Odom, a well-known 42-year news anchor from the ABC television affiliate in Philadelphia, sat in front of the sanctuary and had an open dialogue about everything from why these racial tensions are different than those in the past to where do the conversations go from here. Aside from being a well-respected journalist, Vernon is also the son of an American civil rights leader and the grandson of a man who was born into slavery in the 1850s and later became a physician.

“The number of people, both in the congregation and other viewers, they said what I wanted to hear,” said Howard, who is only a temporary supply pastor at Trinity but still knows the congregation from having been an interim there for more than two years 20 years ago. “Not that it was a good idea, but that we raised questions that we know we need to ask.

“I didn’t want something ‘in your face,’ but I wanted something honest. Vernon seemed perfect. His journalistic career took him all over the world. He’s a very knowledgeable guy, he’s articulate and he’ll tell the truth. He gave some history, told some truth and spoke about his own experience. He was factual, experienced and personal.”

While Howard knows these types of conversations are occurring in churches around the country, he felt doing something different might draw more attention to the cause.

“I watch three or four services every Sunday, and they’re addressing the question, but there was just something different about having the two of us there,” Howard said.

Called the “Race: A Conversation,” which was broadcast online due to the coronavirus pandemic, it consisted of four parts, with Howard offering biblical reflections after each of Vernon’s sharings. (Watch the service here.)

“I didn’t want it to be a forum and not a sermon,” Howard explained.

The first segment dealt with why the reaction and protests following George Floyd’s murder are different and more meaningful than of those in the past. Vernon said cell-phone footage is a big reason for that as now everyone can view the images for themselves. The way George Floyd was killed is also important.

“Most homicides in this country take place as a result of guns, which is rather impersonal in terms of killing somebody,” Vernon said. “But this time, people saw 8 minutes and 46 seconds of the most personal way to kill somebody. And the police there in Minneapolis were relatively casual about it. It’s not a gunshot shooting somebody in the back as they flee or beating them to death, which doesn’t take that long. It’s been a pandemic of police violence against the Black community that’s gone on for more than a century now.”

Vernon said he continues to have “the talk” with his 23-year-old son, a conversation about the fact that he is Black and that he will stand out in a crowd of people and among police.

“America is the only big country to my knowledge that was not founded on the basis of religion, culture or language,” Vernon continued. “So, you have different cultural vibes that jump out and create a lot of problems and create these conflicts.”

After Vernon talked about “the talk,” Howard shared the fact that the scene with Jesus and the children is often romanticized. Artwork features a light-skinned Jesus in a tailored robe with a dressed-for-church child on his lap. These were street kids, waifs, homeless and hungry, regarded as on a par with street dogs. And, they were “unclean,” so Jesus is challenging a taboo in his touch.

Then Jesus gave “the talk” to the adults, not only warning them about the consequences of bringing harm to even one of those children, but that they cannot enter the Kingdom until they become like the children. 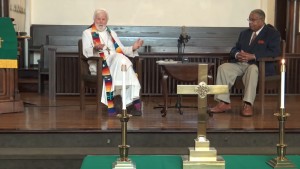 The second portion of the “Race: A Conversation” dealt with systemic racism, which deals with the handling of racial-ethnic people by those associated with everything from colleges and universities to law enforcement agencies. Howard then shared how the prophets challenged not only unjust merchants, but an unjust economic system – unjust judges, but an unjust judicial system. Jesus driving the moneychangers out of the temple is often assumed to be that they were encroaching on sacred space. But he called them “a den of robbers.” He was challenging them as unjust merchants, but also the unjust economic system they were part of.

In the next segment, Howard asked Vernon what is needed to make the conversation about racism and injustice deeper?

“Sensitivity and listening,” Vernon replied. “Listening is the most powerful weapon in the world if done properly.

“I want to have the courage to be uncomfortable,” Howard added.

The final point discussed on Father’s Day centered on leadership and how that is affecting the mindset of all of the parties involved in these incidents. It touches on more than the government but also that of influential agencies like police departments, Vernon said.

“The speed of the captain is the speed of the ship,” Vernon said. “Leadership is the person who stands up on that pedestal or on that mountaintop and talks to the huddled masses and says, ‘Salvation lies this way.’ You may not like it, but salvation is over here and takes them in the right direction. Failures in leadership are deadly, they’re very costly, they endure through history and hurt people culturally. I have hope but it’s tempered by years of having grown up in all of these experiences.”

The goal of this service, clearly, was to help educate people in an area where injustice against the Black population is not as readily seen. How those hearing the message will respond going forward will be important.

“I do hope that this is different,” Howard said. “I think it’s different because of the activity in Europe – France, Germany and Britain. It’s not only solidarity with the U.S., but it has been opening the questions and issues of their racial history.”