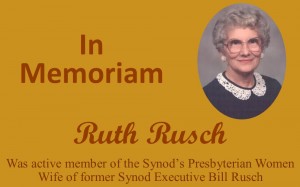 It is with sadness but assurance of resurrection that the Synod of the Trinity announces the passing of Ruth Rusch on June 1. She was 95.

Ruth was the wife of longtime Synod Executive Director the Rev. Dr. William (“Bill”) Rusch, who held the position from 1968 until his passing in 1987. They were married for 39 years and raised four children.

Ruth, who grew up in Erie, was a Director of Christian Education for several congregations in the region. Ruth was also very active in the Synod’s Presbyterian Women’s group during her time in the region.

At age 91, Ruth published a children’s book titled “The Adventures of Freddie the Frog.” According to an article in the Atlantic Highlands Herald, “She was inspired to write the book after looking at a series of photos her niece took of a ceramic frog in various situations to humor her. The frog named Freddy was made by Rusch in ceramics class. She decided to add text to the funny images and pen a story about Freddie’s escapades meeting different creatures such as Sammy the squirrel and Frannie the frog.” She hoped the story “will teach children to continue to use their imaginations and show them how to handle new situations as they pursue their school days.”

“My first intention was to give the book as a gift to each member of my family,” Ruth was quoted as saying in the article. “However, since I received my first copy, many people have been asking to purchase the book. I am quite flattered.”

Aside from writing, she also enjoyed reading, doing needlepoint and painting ceramics.

Memorial donations in Ruth’s memory can be made to “The William. G. Rusch Scholarship Fund” at Pittsburgh Theological Seminary. More here.

The Synod of the Trinity is thankful for Ruth’s work and service to the region and sends condolences to her family and friends.