Note: Gregg Hartung, the director of Presbyterian Media Mission and friend of the late Fred Rogers, had the opportunity to attend a pre-release screening of “A Beautiful Day in the Neighborhood” movie. Starring Tom Hanks, the film details the life of Fred Rogers, the creator and star of the Mister Rogers’ Neighborhood children’s television show that aired from 1968 to 2001. Fred Rogers was a native of Pittsburgh and graduated from Pittsburgh Theological Seminary as an ordained Presbyterian minister. What follows are Gregg’s thoughts on the screening of the movie “A Beautiful Day in the Neighborhood,” which was held Sept. 26 in West Homestead, PA, near Pittsburgh. 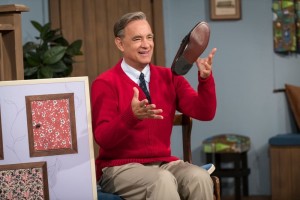 Tom Hanks stars in “A Beautiful Day in the Neighborhood” movie that profiles the life of Fred Rogers, who was an ordained Presbyterian minister.

Tom Hanks’ wonderful portrayal of Fred Rogers is eerie at first as you try to adjust from the actor to the real Mister Rogers on TV and in life. Fred wasn’t an actor and Tom is a wonderful one, who captures the essence of Fred, who in real life impacted so many people through his call to ministry in caring for children and their families.

This slice-of-life movie was inspired by the article in Esquire magazine “Can You Say … Hero?” by Tom Junod.

More important is the role of actor Matthew Rhys, who was cast for playing the part of journalist Tom Junod. Rhys’ role in this story as Lloyd (Esquire journalist) is more central to making this movie exceptional and powerful for today! Tom Hanks becomes in some mysterious way a supporting actor to the main role of Rhys – the same way in real life Fred Rogers was always able to turn the table or attention on the person he was with rather than on himself. Fred’s concern for others in being with them “not distracted” is so central to who he was, and his legacy of being with you lives on this movie.

We see ourselves through this journalist’s life in that we all carry with us shortcomings, things that hold us back in living out our full potential, which can make us have unmanageable emotions at times – emotions that hurt those we love around us!

This movie makes Fred human, in that he talks about anger and dealing with it. He talks about his shortcomings, but it is also about teachable moments that help us deal with anger or undesirable emotion that blocks our being who God really intends us to be, in the gift of living this life.

So, the major themes are forgiveness, kindness, dealing with anger, uncovering hurt that can open us to love and coping mechanisms that provide our being able to manage our emotions in dealing with life. We are far from perfect, but we can live into what God wants us to be, and as a result, we can learn to honestly care for those around us. 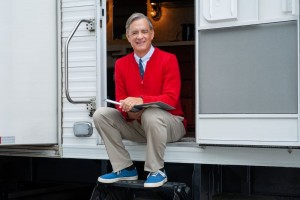 Much of the filming took place in Pittsburgh where Fred Rogers, played by Tom Hanks, attended seminary school.

The movie ends up being another episode of Mister Rogers’ Neighborhood for adults. If taking children to see the movie, they need to help unpack it as much as the adults who take them to see it. If it isn’t discussed with other adults and children, the teachable moment that Fred always looked for in life is missed.

Finally, there is a wonderful restaurant scene where Fred asks the journalist friend (Lloyd) to take 60 seconds to think about all those people who helped him to be who he is today. In today’s fast-paced society, 60 seconds seems forever. As the camera pans others in the restaurant, it was wonderful to see some of the original supporting cast and staff of Mister Rogers’ Neighborhood sitting at a nearby table. These were and are the people who in Fred’s life that I’m sure he reflected on when taking 60 seconds to appreciate the special people in his life.

One person said, “You need to watch this movie several times,” as there are layers of relationship building, family dynamics and theology that shares how deep and complex Fred Rogers was and continues to be for us. Fred’s legacy of hope and love grounded in faith lives on in wonderful and unexpected ways.

The movie opens in theaters across the country Nov. 22.