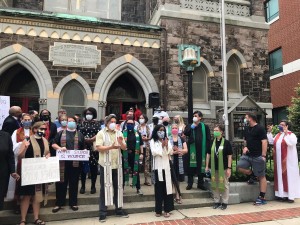 We have asked several presbytery and church leaders who have been a part of some peaceful events to share their experiences with us, for you. What follows is a firsthand account from the Rev. Rhonda Kruse, the transitional leader of Lehigh Presbytery:

On June 11, several Lehigh Presbytery pastors participated with me and 30-plus clergy from a variety of faith communities in a march and press conference in Allentown, PA. The purpose of the event was primarily to share a statement of confession and call to action for racial justice with POWER Lehigh Valley, a local interfaith, ecumenical group affiliated with the national Faith in Action organization. The text of the statement confesses the White church’s silence, complicity in and failure to dismantle systemic racism in the U.S., particularly in the Christian community.

This was the third march in which I participated since George Floyd was killed by a white police officer in Minneapolis on May 25, but it was the only one specifically intended for faith leaders. It was hard to hear those who spoke, honestly admitting their own silence and inaction when faced with obvious injustices toward Black, Brown, Asian/Pacific Islander and Native friends, acquaintances and strangers. I felt my own guilt pulling at my heart. I have always considered myself to be open-minded, progressive and tolerant; certainly not racist! It was humbling to walk beside my clergy sisters and brothers of color and listen to stories of prejudice and injustice experienced by their congregations and themselves.

Participating in this very public display of repentance and atonement for my own silence and inaction, as well as that of the White church as a whole, served as a wake-up call. What can I, a White woman of privilege, a leader in the church that helped create this unjust system, do to help clean it up? I hope my colleagues — White, Black, Brown, Asian/Pacific Islander and Native — in the Synod of the Trinity will walk with me as I seek to work towards real change.