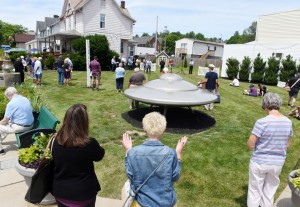 We have asked several presbytery and church leaders who have been a part of some peaceful events to share their experiences with us, for you. What follows is a firsthand account from the Gregg Hartung, the commissioned ruling elder at Crestview Community Church in Callery, PA:

I appreciate and thank the Mars Ministerium and the Rev. Peter de Vries of Old Union Presbyterian Church, who took the lead in forming a Prayer Vigil on Racial Justice in the town of Mars, PA, on June 17. A Prayer Vigil on the day five years after the Charleston Church shooting.

As mayor, I had to be considerate of those who feared such an event happening in the town where I serve – Mars. It was a contentious meeting of the town Council on June 15 when some business and property owners in the downtown made it known they didn’t appreciate Rev. de Vries and the 12 area ministers, including myself, bringing the prayer vigil to the town square. I talked them through the process that permitted the religious leaders to hold the vigil. Most of the people who were there wanted no parts of it!

The business and property owners were fearful of some outside groups; whether it be white supremacists or Antifa, they didn’t want it here. They have Black or African-American patrons who frequent their businesses and they are not racist was their comments over and over again. Please tell the churches to share their messages in their place of worship or on their property but not in the middle of Mars.

To have the Mars Ministerium stand in solidarity with Black people who are being treated by hierarchical power structures in society, in which those seen of lower status are dominated and oppressed by those above them, is needed now.

The meeting ended with some business owners still wanting council not to permit the event from happening. However, a key business in town, the local bank who owns the property where the prayer vigil would be held, supported it.

The headline on the front page of the local newspaper read “Reaching Out: Prayer vigil conducted by Mars ministerium.” The story read, “Clergy – 12 of them, from Mars and Callery as well as Cranberry and Middlesex townships – read prayers, joined in song and discussed racial injustice in the United States for just under one hour by the spaceship in the center of the town.”

“It was a massive demonstration of the unity of the pastors,” said Rev. de Vries following the vigil. All the leaders endorsed the same message that God created people equally and that people have the power to recognize that and to do something about it.

Several attendees of the over 80 people who showed up, said they came out because they believe in and support the Black Lives Matter movement, which has picked up steam after protests for racial equality across much of the country.

As mayor of Mars and a Commissioned Ruling Elder in serving a church in the nearby community of Callery, it was a challenge to wear both hats appropriately and listen to folks in the town and surrounding communities.

Do we have problems in understanding racial justice? We sure do! In having this conversation in the town square outside the four walls of the church, with the follow-up coverage by two major Pittsburgh TV news stations and stories in both daily and weekly newspapers, it has people reflecting on racial injustice way beyond those who just attended the vigil. They may have seen it only as a Black or African-American problem, something that those who live in cities need to deal with, and the difference is that it needs to impact small-town America, to help all people, to reflect on how we can make the world a better place. Let’s pray that it happens.