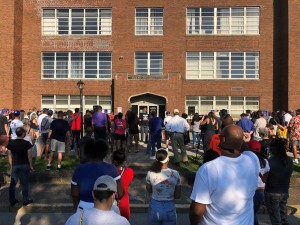 We have asked several presbytery and church leaders who have been a part of some peaceful events to share their experiences with us, for you. What follows is a firsthand account from the Rev. Dawn Adamy, the pastor at Bream Memorial Presbyterian Church in Charleston, WV:

For almost a year, I have served a small congregation on Charleston, West Virginia’s West Side, the most economically distressed and racially diverse region of the capital city.

The Sunday after George Floyd’s murder there was an organized protest of about 200 people at City Hall. There was a bigger protest that was being organized by the same organizers at the same location for June 5. These protests focused on Black Lives Matter and addressing police brutality. During the week, a few young adults began holding daily protests every afternoon on the West Side. Many of the folks who showed up were those who had had personal encounters with police as well as first-hand experience with homelessness, incarceration or addiction. These gatherings felt like parties, drawing anywhere from 30-60 people.

One day the forecast was for rain, but it didn’t end up raining. I showed up just to see if the protests were still on and there was one lone woman standing on the corner holding a “Black Lives Matter” sign. I brought my sign over and joined her. It was just the two of us for a while; we chatted and waved at the many cars who would drive by and honk their horns in support. Within an hour, a couple dozen more folks had joined us. People would stop and hand the organizers money so that they could purchase poster-making supplies, drinks and snacks. It was very much an organic thing and began to take on a life of its own. It felt like the Holy Spirit was blowing through our streets.

As the day of the June 5 Black Lives Matter March approached, several threats of violence were received by the organizers, and by Friday the decision was made to postpone the march. Several of the young leaders from the West Side were not to be deterred. They doubled their efforts, spread the word on social media, and even enlisted the help of the city’s mayor and police to help provide traffic control for the marchers’ safety. The event had around 250 participants and was peaceful from start to finish. The mood at the end was celebratory.

The next focus was the renaming of Stonewall Jackson Middle School, which serves students on the West Side, where most students are Black and Brown. This campaign is still underway, but a local rally in front of the Board of Education reveals widespread support within the community for the school to be renamed. One of the most prophetic speeches was given by Camdyn Harris, a 12-year-old student at the school and a current member of our confirmation class!

Juneteenth was especially meaningful in that the various constituencies: the young adults from the West Side, families, retirees, local pastors, Mothers of the Movement, business owners and community leaders all came together to march and celebrate the day. It was a truly intergenerational, community-wide event and one of the most unifying experiences I have had since moving to Charleston.

I have attended almost all these events and what strikes me the most is how it is young people leading the way. As a white woman who pastors a predominantly older white congregation, I show up to stand with our neighbors, to listen and to learn. I hope to take these experiences and interpret them through a gospel-lens for my congregation so that we can journey together into these troubled but hopeful waters.

Some members of our congregation would love to participate in the marches and community activities, but Covid-19 concerns are currently a strong deterrent. Still, most of our session understands that there is no way for our congregation to be faithful to its mission to “be God’s helping hands in our neighborhood” if we are not willing to engage with the reality of racism and its impact on our neighbors. We must get to know our neighbors and their real needs and concerns if we are to be faithful witnesses to Jesus Christ, who is, as Eugene Peterson reminds us, God moving into the neighborhood.

The momentum for change is strong. This weekend’s community gathering is titled, “Protest and Push Forward,” and will include voter registration, 2020 census help, resume review and financial literacy assistance. The people of our community are clearly committed to transforming their city in ways that heal and empower. It is exciting to witness how God is moving through our lives and through our streets!