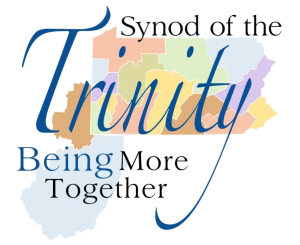 We have asked several presbytery and church leaders who have been a part of some peaceful events to share their experiences with us, for you. What follows is a firsthand account from the Rev. Dr. Glenn Hink, the pastor at the First Presbyterian Church of Sharon, PA:

The wind of the Spirit still surprises. Around 8 a.m. on Pentecost morning the Spirit nudged me in a text. The text was from a church member and downtown Sharon business owner. On social media she had seen a protest march for that day was being organized in response to the murder of George Floyd. With visions of NYC and Philadelphia and Minneapolis, the church member was concerned about her business, and concerned about the downtown. I began to wonder about what to do.

With First Presbyterian Church closed to worship due to the coronavirus pandemic I had time to make some phone calls. I needed more information. I and the church have a history of support and involvement with the African American community in our town. We also support the local police department, which does good work in our town. I wanted to continue to support both.

My wife decided to join, and together we walked down from the church to the public library. The walk was to start there. About 150 people were gathered there. I knew a few people. Some wore masks and practiced distancing. Many did not. Most were young adults; black, white and brown. A megaphone was passed around. Different people led chants: “I can’t breathe;” “No justice, no peace;” “Black lives matter.” Some shared their thoughts and feelings. A few “threw out f-bombs.” A few speakers tried to “stir up” the crowd. Others tried to keep the crowd calm. One young white man was there with an AR-15 and a handgun. Another had a guard dog on leash. I suppose they were also walking for their version of “freedom from the man.” And while I believed and trusted that it was right to be there, it was not comfortable for me, a white, Presbyterian pastor in his early 60’s. This was a different experience for me.

At 1 p.m. the walk started. The different chants continued as we spread out over two blocks. Owners stood outside their businesses. They, too, were nervous because they had seen the news from NYC and Philadelphia and Minneapolis. I walked and prayed for “justice and peace” with the chant. The police department had closed off the streets for the walkers. The march arrived at the police station without violence.

At the police station we all gathered together. The megaphone was again passed around for chants and opportunities to say something. A few police officers stood at a distance to maintain peace and order. And I think they were also there to control any possible problems from a small crowd of on-lookers that began to gather.

On que we were invited to lie face down for 8 minutes and 46 seconds, the time George Floyd laid face down with a policeman Derek Chauvin’s knee on his neck when he died. That day I decided to join the 25 percent of the marchers who did not lie down. Now I might; I don’t know. I suppose I felt like both a participant and an on-looker, which I was.

At one point a young African American man was trying to raise the emotional level of the crowd. His speech was filled with “f-bombs” and anger. And older African American women then took the megaphone. She spoke as a grandmother with a calm, caring voice. She identified with the young adults’ frustrations. She acknowledged the injustice they felt. She encouraged them to stay focused on peaceful protest for change. She then led the group in prayer. And immediately the anger level of the marchers came down. On Pentecost Sunday, the Spirit subtly moved hearts again through an aged saint.

After about 30 minutes, some of the walkers began to leave. My wife and I joined them. Others stayed, and then marched on to another local police department. Our experience with the march was peaceful that day.

Since Pentecost Sunday I’ve talked with a few Black and white pastors and community leaders. As this movement begins in our area, it appears:

Systemic racism in our community needs to be peacefully and consistently addressed;

Each of us need to honestly reflect on our own racist stereotypes and views, and change;

Each of us need to make friends with a few people who look different than me;

The leaders of the movement are young adults, 20-35 years old, mostly African American, who do not seek older adult leadership;

Black white and brown young adults share in the movement;

Because many of these young adults do not attend church, they do not think about the church as helping lead the movement;

Organization happens through social media, and not in the church;

A primary role for the church is to discuss racism and justice within the church and community, but not to lead the movement.

With a “call” to peace and justice in the kingdom of God, it appears at this time that the church is being asked to have both a supportive and on-looker role. And there is plenty to do there. But who knows how the Spirit might blow next Sunday.