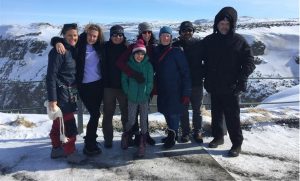 Chip Crawford, far right, stands with his family in Iceland during a trip that came less than two-and-a-half years after he was severely burned following a fall while vacationing in the country. From left are Bryce, Haven, Kyle, Mira, Shannon, Michel, Rudy and Chip. Crawford (first name of Chip’s other grandchild) was unable to join the family due to university commitments.

It took Chip Crawford two and a half years to finish his “bucket list” adventure to Iceland, but he finally did it. And the return trip was even more meaningful than he could have ever imagined.

Chip, an elder, deacon and Stephen Minister at Fox Chapel Presbyterian Church in Pittsburgh, originally traveled to the capital city of Reykjavik in October of 2016 as part of a surprise 70th birthday excursion from his two daughters. The scheduled five-day trip turned horribly wrong when on day 2 Chip lost his footing while walking near a geothermal hot spring and ended up submerged in the boiling water for nearly two minutes, keeping only his hands and head out of the water before being rescued by his daughter and a passer-by.

The fall resulted in third-degree burns over 40 percent of Chip’s body and second-degree burns on 20 percent of his skin. He spent two nights in a Reykjavik hospital before being flown back to Pittsburgh. What followed was an extensive operation followed by a four-month stay in Pittsburgh hospitals – including a four-week period when he was in a medically-induced coma while undergoing 13 skin-graph surgeries and other related operations.

Read our story on Chip’s fall and initial recovery by clicking here.

While the healing has been slow for Chip, he has recovered enough so much so that 31 months after the accident he returned to Reykjavik in April of 2019, this time with seven other family members including his wife, two daughters, their husbands and two grandchildren to complete the vacation. But there was a rather important secondary purpose to the trip as well.

Another important part of the trip back to Iceland was for Chip, a former member of the Synod of the Trinity’s Nominating and Personnel Committees, to get some closure on an incredibly intense and emotional time in his life. But he wasn’t the only one who benefited from this return-trip experience.

“I got some closure as much for my daughters as myself,” he said. “Also, since my wife had to live through that trauma remotely until I got back to Pittsburgh, I wanted her to visit Iceland with me.”

While Chip knew he had to go back to Iceland, not everyone in his family felt that same passion. It took some convincing for a couple family members to go with Chip back to a place that was linked to such a horrible experience in his life. It ended up being a memorable trip for all the right reasons. Not only were they put up as guests at the Secret Lagoon resort by owner Aga Szaa near where the accident occurred, they also walked on a glacier and toured an underground cave system underneath it.

“It was all positive,” he said. “There were times that were very emotional.”

Chip was moved by a story he heard from Edda Sigurdardotti, a team member from the Canadian Embassy in Iceland who helped Chip after his fall. News of his accident was widespread, and she responded in 2016 to lend a helping hand. Edda thought Chip was a Canadian resident, when in fact it was one of Chip’s daughters who lives in the Toronto area, but even when Edda found out the truth, she continued to help.

The woman learned that Chip had a 72-hour window to get to Pittsburgh to be treated, and she called on a friend at the Reykjavik airport to make sure a flight was redirected to the city and would be available to Chip in time to meet that deadline. The woman also stepped up to help cancel car and lodging reservations. Chip had not known of these details until his return visit.

“She handled many different things that my daughters didn’t have to worry about so that they could focus on getting me back to Pittsburgh,” he said. “That was emotional for me.”

Chip’s subsequent visit with the head intensive care nurse at the Reykjavik hospital was another special moment for him – and the nurse.

“She started to tear up because she said it’s so rare to hear from people after treatments,” Chip said of that reunion. “I sent a note of thanks after the accident. The nurse said having somebody return years later was rare and so much appreciated.” 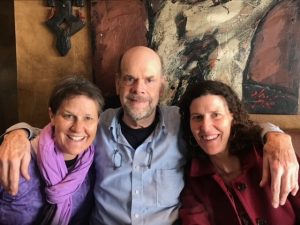 Chip Crawford poses with his daughters Bryce, left, and Shannon, who helped with the healing process by returning to Iceland with their father in April of 2019.

A few years ago, spending multiple hours traveling to an overseas country seemed out of the question for Chip as he recovered. For the first year after he was released from the hospital, there was intense itching that followed his multiple skin graph surgeries. When he slept, he had to lay on his right side. During long car rides, he needed to lay down on a mattress in the back of his SUV to be comfortable.

“It’s been a mountain to climb,” he said. “I stretch every day for a couple hours. There isn’t anything I can’t do, but I don’t do things as fast as I used to do them. That’s probably age-related as much as it is anything else.

“I’m feeling OK. I still have some significant skin pain issues. It’s just itching, that’s all. I can live with that.”

The traumatic event has also strengthened Chip’s relationship with God. The outpouring of love and support from his family, friends, congregation and even people he didn’t know has only improved the way he looks at life.

“When I returned home, there were over 200 cards and many more emails from people all over the place,” he recalled. “I would say that half of them were from people from church. Some came from Iceland, people I would never meet in life who were was just moved by the story.

“Reading through those, I just kept a pile. Every couple weeks I’d look at them and it was restorative knowing this community of believers of all different faiths – not just the Fox Chapel Presbyterian Church – was reaching out. That continued to move my spirits.”

Chip has also been renewed through work and conversations he has had with Pittsburgh’s CORE (Center for Organ Recovery and Education) and the Burn Concern Support Group of West Penn Burn Center. Through his experiences, he is able to lift up others who are either going through something similar to what he did or are caring for those who did. He’s also part of the Phoenix Society for Burn Survivors and is being trained as a moderator for calls that allow for sharing among the survivors.

Chip would like to return to Iceland a third time, again with his wife, in about two years in hopes of touring the entire island. So far, they have just been to the southern part of Iceland and would like to see more. It would be one more chapter in his recovery from a traumatic event that may have scarred his body, but not his life.

“For my well-being, I need to be in a place of positivity,” he concluded. “If there are things that are negative, I try to avoid them. I want to stay above the water line. That’s sort of a mantra and metaphor for me because I was in hot water. That’s where my faith and God comes into the picture. It’s the good news, not the fire and brimstone stuff. Staying positive is really important. I try to, in my interaction with people, stay there. If they are feeling really low, find a way to regain joy and happiness.”

Chip Crawford has certainly done that.