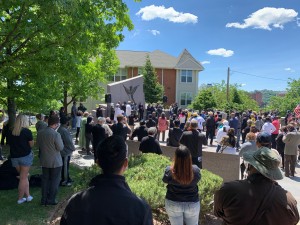 Pictured is a small section of the more than 300 gathered for the clergy rally, which then moved downtown to the city/county building in Pittsburgh.

What follows is a first-hand account from Executive Presbyters Craig Kephart (Washington Presbytery) and Sheldon Sorge (Pittsburgh Presbytery) who took part in a clergy rally on Monday, June 1, in Pittsburgh protesting the death of George Floyd.

The Minneapolis killing of George Floyd, an unarmed black man, at the hands of white police jolted Pittsburgh, which has its own dark history of unarmed black men being killed by white police. Demonstrations and rallies have abounded over the past week, with some turning violent. The church community has gathered people for public prayer vigils, including an interfaith rally of regional clergy that drew more than 300, including us, to Freedom Corner, an iconic Pittsburgh civil rights memorial.

One of us was wise enough to wear a wide-brimmed hat. The other went home with a heavily sunburned face above the mask line.

That gorgeous Monday afternoon we both stood safely social-distanced and in solidarity with some 300 other church leaders, witnessing an hour of impassioned prayers and protest speeches – including a powerful call to justice from the Rev. Dr. B. De Neice Welch, pastor of the Bidwell Street United Presbyterian Church – and joined the half-hour march into downtown to government offices. In the previous 48 hours the whole event had been urgently organized by five African American pastors, leaders in the historically black congregations in Pittsburgh’s Hill District and the Monongahela Valley. Co-sponsored by Christian Associates of Southwest Pennsylvania, their invitation went exclusively to area clergy, with hopes that an Interfaith Prayer and Protest Conference would “address these injustices, be the voice of leadership in the African-American community, and offer an outlet for the tensions many are feeling.”

Many pastors responded to their appeal. We saw sisters and brothers representing Lutherans and Episcopalians, AMEs and AMEZs, Baptists and Pentecostals of several communions and rabbis from Pittsburgh’s synagogues. And nearly two dozen Presbyterians also! But for the sad impetus that drew us together, it was a beautiful gathering of God’s people from a splendid variety.

An Spanish translation of this story is available here.

In nine speeches and prayers – one for each of the final nine minutes of George Floyd’s life – we were unified across denominations and backgrounds. Chants of “Black Lives Matter” and “Enough is Enough” punctuated the afternoon, and several refrains of “Say His Name” or “Say Her Name” answered the loud pronouncement of each one of those names, individuals victimized by racism in our nation’s recent events and in Pittsburgh’s checkered past. We were challenged not to forget the humanity at the heart of these current events, that George Floyd and Ahmaud Arbery and Brionna Taylor are lives – souls – precious to God and much more than mere names in news reports. The names of Jonny Gammage and Antwon Rose were recalled, reminding Pittsburghers that life-taking racism hits as near as our South and East Hills, leaving wounds that are still raw even 25 years later.

The speakers held up sound theology for us, pointing to the pervasive human sin at racism’s root, and extolling the glory of God who alone can save us from ourselves – yet without weakening the call to human responsibility in battling this sin.

“We have been here before,” cried out one bishop. “And we appoint task forces and we conduct studies and we publish papers and we make recommendations. But over time we lose sight of the incident that started us on our way, and we lose our way, and our progress against racism all fades away.”

Alongside the theology we heard real-world experience and the anxiety of black men’s lives, one preacher telling of a kitchen table conversation she had with her grandson, himself a husband and father, but who feared walking the street because of the police profiling brought on by his color, his hairstyle and his physical stature.

The rally eventually shifted into a planned march down Centre Avenue and over to the City-County Building. Our company of pastors flowed along peaceably chanting and singing. Hearts were heavy for the incidents and issues of our day, but at the same time our spirits were buoyed by the unity expressed in the crowd. The march was peaceful, except for a protesting bystander who loudly shouted his opposition to everything we were standing for, declaring that all we wanted was to oust the president.

A few observations may be worth reporting here. 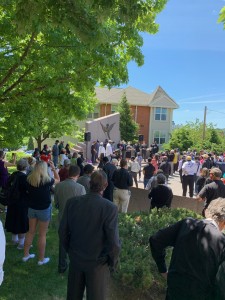 First, battling our racist behaviors will require slaying some interpersonal demons. Participants arriving at this rally looked for our acquaintances, and often stood with those we knew best. The joy of renewing company with colleagues from whom we’ve been separated for months due to the COVID-19 pandemic was palpable. Yet, interactions between white and African-American participants were more the exception than the rule. Making progress against racism will involve some basic interpersonal ice-breaking and intentionality about engagements with one another even though – indeed, because – we black and white Christians are still too much strangers one to another.

Second, we need to be on guard against the sin of casting all the blame on others. Rally speakers lifted up our shared sinfulness and need of repentance, and did so admirably. But there were some points at which blame was lodged against those who differ from us, whether by race or theology or politics. Finger pointing only abets segregating and wall building. And yes, we all do it.

Third, let’s be mindful of commercial media’s message. Television and newspaper people came out in force to Freedom Corner at noon. Yet in the evening TV new presentations – now available anytime at each outlet’s website and Facebook page – the coverage of 300 pastors peacefully protesting took a back seat to the much larger and more contentious rally later in the day at another of Pittsburgh’s historically African-American neighborhoods. That crowd had hundreds more people, dozens more signs, and video of agitated protesters held much more intrigue. Peaceable Christian protests, “walking humbly with the Lord,” probably won’t get the public exposure that civil unrest and rioting will garner. We should expect that.

The June 1 events ended at the building representing the core of Pittsburgh’s civic government, where we emphasized humanity by repeating the victims’ names, reminding us again of the power of the electoral ballot. Speakers at Freedom Corner likewise emphasized that power.

What will be our follow-through? The June 1 rally was a call to Christian leaders and churches. Voices and energies need to be raised against this wickedness of our generation, and pastors hesitant to wade into these waters are charged to re-examine their reluctance. Christians – white, black and brown – must break old habits and break new ground, uniting as never before against the injustice of racism in our communities, in our state and in our nation. Christian hope and destiny cannot be realized until, in the picture offered in Revelation 7, every tribe and tongue and people join together in honoring our Lord.