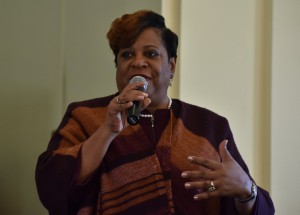 Diane Givens Moffett speaks during a gathering of Pittsburgh Presbytery in February.

Rev. Dr. Diane Givens Moffett, the executive director and president of the Presbyterian Mission Agency, spoke at presbytery meetings in Philadelphia and Pittsburgh in February, sharing her thoughts on the state of the church and ways that people can work to make it stronger. One program Diane highlighted during both visits was PMA’s new “Matthew 25 Initiative,” which urges congregations to reach out to the poor, marginalized and distressed in their communities.

In Philadelphia, Diane also preached at the annual joint service between the National Black Presbyterian Caucus and the presbytery. Each year, leaders in the community are honored, and this year those recognized were Kevin Porter, the stated clerk of the Presbytery of Philadelphia, and Ruth Santana-Grace, the presbytery’s executive presbyter, for promoting justice and reconciliation. 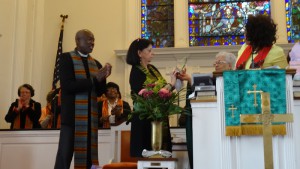 Ruth Santana-Grace receives an award from the National Black Presbyterian Caucus as Kevin Porter, who was also honored, cheers.

“It was one of the most humbling moments in my life – especially given the polarity in the world,” Ruth said.

Kevin agreed that the honor was a moment he won’t soon forget.

“As a child of the Presbytery of Philadelphia,” he said, “it was indeed a humbling and deeply moving moment to be recognized by the Philadelphia Chapter of the National Black Presbyterian Caucus along with my colleague Ruth in the presence of so many from the caucus and presbytery who had a role in shaping my faith journey.”

Click here to view resources from the weekend of gathering in the Presbytery of Philadelphia.

Two weeks later, Diane delivered the sermon at the meeting of Pittsburgh Presbytery. Titled “Kingdom Requirements” (based on Micah 6:8), the sermon referenced “The Matthew 25 Initiative.” She spoke more fully about that program at a pre-presbytery gathering. Congregations will be asked to consider signing on as “Matthew 25” churches to make a special commitment to improve the welfare of those in need in their communities. Diane also preached the Sunday worship services of the East Liberty Presbyterian Church later that same weekend.

Click here for video of Diane’s sermon to Pittsburgh Presbytery. 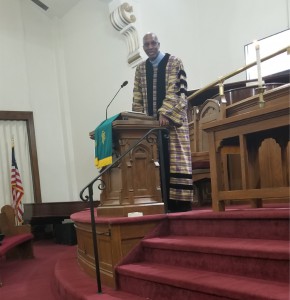 A few months prior, the Rev. Dr. J. Herbert Nelson, the stated clerk of the Presbyterian Church (U.S.A.), preached at the 150th anniversary celebration of Grace Memorial Presbyterian Church, which is Pittsburgh’s oldest African-American congregation. Founded by the Rev. Henry Highland Garnet (whose life and ministry were honored by the 2018 General Assembly), Grace Memorial is considered the “mother church” of African-American congregations in the region. Its legacy continues to be built upon under the pastoral leadership of the Rev. Gavin B. J. Walton.