Gathering with Leonard Sweet will focus on the ‘future church’

According to the most recent statistics released by the Presbyterian Church (U.S.A.), more than 56 percent of the churches in the Synod of the Trinity have a membership of 100 and under. What’s more, nearly one-third of the congregations in this region have a membership of 50 and under. And many ministers believe that it’s these smaller churches that aren’t receiving the attention they need from the national church and mid councils.

The Rev. Jordan Rimmer of Northminster Presbyterian Church in New Castle, PA, is one of those pastors. That’s why he’s organized the first “Future Church Symposium.” Scheduled for Saturday, April 27, at Northminster, this gathering is aimed at ways to deal with the issues that face many churches, both big and small.

“There’s a lot of conversation about the future of the church and where it’s going, but it’s sort of happening at a national level and relates a lot more to bigger churches, I think, instead of smaller, town churches,” Jordan said. “I don’t think it’s denominationally-oriented either, and so I wanted to be able to start some of those conversation in my region. What does the church in western Pennsylvania in this region look like in the future?”

Jordan has brought in Portland Seminary friend Leonard Sweet to lead the discussion. Leonard is a best-selling author and professor at Drew University, George Fox University and Tabor College. Twice named “one of the 50 most influential Christians in America,” he’s also the owner of PreachTheStory.com, a website that offers his sermons and resources to pastors. A $21,000 Synod of the Trinity Innovation Grant was awarded to Jordan to help him lay the groundwork for the symposium and bring in a notable speaker like Leonard, who will also be preaching at Northminster Church the day after the symposium. (A poster with details is available here.)

“I wanted to bring Len Sweet to my church, my people and my region,” said Jordan, who is in his second year at Northminster. “I wanted to be able to share him with everybody. It’s pretty cool that God led me to this church, and they were really interested in some of those same conversations. 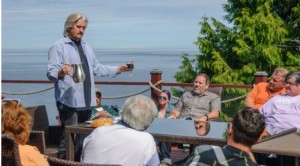 “Len is unique. He’s a fun guy, a very generous guy but very forward thinking. Sometimes he’s out there ahead of where everybody else is and people aren’t ready to hear what he’s seeing. He’s very much a futurist who thinks in terms of story and symbol, so how does the culture express itself? A lot of times it’s through its stories and through its symbolism, its metaphors, its advertising, its movies. He’s reading those signs and trying to understand where a culture is going. What he does is he teaches people to do that and then he also teaches people to do that with the scriptures. How do we read the signs, the symbols and the stories of the Bible and apply them to our culture today?”

The symposium, which will run from 9 a.m. to 4 p.m., is not being set up like other gatherings of its kind. Instead, this “Future Church Symposium” will not include workshops but instead will feature four individual conversations that will feature Leonard. People will be asked to text or use a hashtag on social media to ask questions while Leonard is speaking. Jordan will then ask those questions to Leonard when he has finished his presentation. Jordan will also allow for discussion in the pews among the people who have gathered.

“It’s going to be a little less structured and a little more conversational event,” Jordan added. “I’ll be able to dig in with questions and dive deeper with him.

Invitations have also been sent to Lutheran and Methodist churches in western Pennsylvania, as well as a number of other local pastors from various denominations and non-denominations, so Jordan is expecting plenty of variety for the turnout. Because the conversation is so overarching, Jordan feels any denomination can benefit from the symposium, not just Presbyterians.

“I think the world is just changing so much,” Jordan said. “Fundamentally, the way people are changing is so rapid right now. I think a lot of our churches don’t quite know how to respond to that. In many ways a lot of our churches have been the one thing in people’s lives that haven’t changed. It puts us at a disadvantage. I want to see churches that are vibrant for my kids and grandkids.”

Jordan will regularly talk about the changes that have occurred during the last several decades with his father, Jim Rimmer, who is the pastor at Westminster Presbyterian Church in Erie, PA. 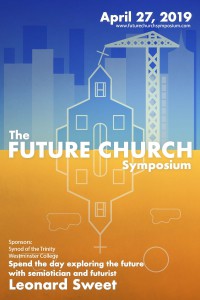 “We reflect often how different the world is that he was trained to minister in and now that I’m trained to minister in,” Jordan said, who was ordained 39 years to the day after his father. “And then I look at my son and think how different the world is for him. I think there’s a big need for those kinds of conversations and those ways of thinking.

No one knows exactly what’s down the road, but there is reason for optimism, and that’s the message Jordan is hoping will be received on a Saturday in late April at Northminster Presbyterian Church.

“I’m hoping that people will get a sense of hope and a sense of direction for the future,” Jordan concluded. “I think a lot of churches have lost a lot of confidence because of the hits that they’ve taken in numbers. In the Presbyterian Church, we’re all aware of the churches closing and churches shrinking. If people just leave with some hope and some ideas about where they might go in the future, that I think is what we’re hoping for.

“I don’t think there’s a formula or a system or a model that’s going to be the church of the future. I think it’s going to be churches figuring out who they are in their context and reshaping that over time. More than anything I hope this just becomes an ongoing conversation, that this event helps some churches start some conversations that can be fruitful for years to come.”

Note: The cost for the “Future Church Symposium” is $35. However, Westminster College is chipping in $10 per person for everyone who signs up from the Synod of the Trinity. Use promo code ilovewestminster (one word, no spaces, all lowercase) to register for the symposium for $25. Online registration is available here. … Reggie McNeal, who has authored nine books addressing church leadership issues and has served as a speaker and consultant for every major church denomination in North America, has already been booked for the April 18, 2020 Future Church Symposium.