Growing with the gifts God has given us. It’s the underlying message congregations try to convey to their worshippers on Sunday mornings. It’s also the root to what Olivet Presbyterian Church near Philadelphia accomplished last year in its own side yard.

With concerns about childhood hunger in the Prospect Park area, Olivet PC decided it wanted to do something about the problem. One answer was to donate food like peanut butter and jelly and bread to the local elementary school to be handed out to needy students. That was all well and good during the school year, but what about during the summer? How could those same kids and their families be reached? 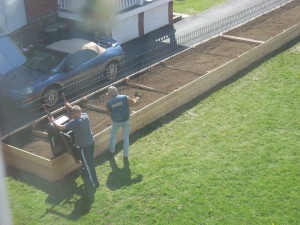 The answer was a garden. And the results were bunches of tomatoes, beans, cucumbers, squash, zucchini and eggplant that could be shared with the entire community. Plus, the locals also got into the harvesting act as they, too, joined Olivet in the farming and maintenance portion of the garden. To say there was plenty of “growth” between the congregation and the Prospect Park community would be an understatement.

“I really feel like it was one of those exercises in faith where we didn’t know exactly what was going to happen with it and it went well,” remarked the Rev. Kathy Hecht.

The garden, which sits in an elevated box, is about five feet wide and runs nearly the length of the property, was constructed in April. Members of the congregation then volunteered for time slots throughout the summer to maintain it.

A sign was placed near the garden alerting people to the intentions of the garden. But it really took off when the local newspaper ran a story on Olivet’s vacation Bible School and included a blurb about the community garden. The church received several phone calls from people who didn’t qualify for items from the local food bank but who were interested in the garden’s produce to help them get through the summer. The church developed a list of people who were in need of the vegetables, and as the produce became available, the people were notified.

Other families who were in need but who hadn’t asked for assistance were also targeted with the bags of vegetables, and the local food bank also received a portion of what blossomed last summer.

“It energized us,” Hecht said. “I feel like it did a couple of things: 1) It provided food for people. 2) It helped us with community relations. It gave people something to talk about with their neighbors about the life that’s happening here in this big, old stone building. Something is going on. It engaged people. I don’t think there was a time when I was out in the garden either weeding or picking and people just wandered by and started talking to me. It became a thing that was not just ours.”

The original idea to build a garden spawned from conversations Olivet regularly has with the local school district (Interboro). When asked what needs are present, the district touched on childhood hunger. The congregation brainstormed and came up with the ideas of constructing a garden and taking food to the local Prospect Park Elementary School. The latter idea saw the congregation fill black backpacks with things like items for PB&J sandwiches that were then distributed to the needy children in those inconspicuous backpacks on Fridays. 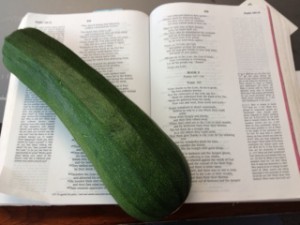 “We felt that two-pronged approach helped us to do something tangible for the community,” Hecht said. “It’s an idea that came right out of the congregation. … They were meant to complement each other.”

The garden was helped along last year by a $2,210 Network Grant that Olivet received from the Synod of the Trinity. This year, some members of the congregation earmarked memorial gifts to help keep the garden going. The church has also received some input from the community to help better the garden in 2015.

If this summer’s garden is as successful as it was last year, it should be another banner season for the garden and the community of Prospect Park. Because the garden has been built and there is a season under its belt, this year’s garden should take off a little earlier than in 2014. It will also allow for more than a one-season garden, which is one of Olivet’s goals this year.

All in all, it was a very productive experiment for Olivet, and one that the congregation hopes will continue grow.

“The church doesn’t exist for us,” Hecht said. “It exists not only for us but for the community to make our community a better place. We should be doing things that are bringing life and health and shalom to our community. There’s a practical part but then also a vehicle for the gospel. I think that’s one of our ins in today’s culture. Faith should do something for the world, so I think it’s opened up those kinds of conversations.”