No matter the weather, the First Presbyterian Church of Olney is bringing some “sonshine” to youngsters in the northeast Philadelphia area. 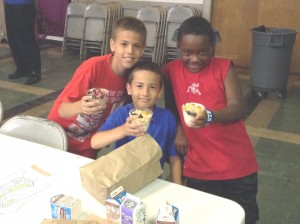 Some youth enjoy their bag lunches at the conclusion of a “Sonshine Stations: Promoting a Peaceful Planet” program at the First Presbyterian Church of Olney recently.

One Saturday a month, the church is opening its doors to elementary school-aged children in its neighborhood for a program called “Sonshine Stations: Promoting a Peaceful Planet.” The activity engages children ages 6-11 in four 25-minute stations for the purpose of creating positive attitudes toward one another in a section of Philadelphia that is lacking in that area.

“It’s an economically challenged area,” explained Krista Barbor, the chair of the Christian Education Committee at First PC of Olney. “It’s very ethnically diverse. … Olney is a place where (violence) is very much a reality, where the kids are very used to, unfortunately, a shooting down the block or their neighbor’s older brother is in prison or their cousin is in prison. It’s very much a reality for them.”

The church has been an avenue for older youth over the years, but it was becoming apparent that there was a need to minister to their younger brothers and sisters as well.

“We as a church have done lots of youth ministry things over the years – and we still are – with teenagers, but we’ve been seeing more and more over the years that the teenagers would come and they’d be trailing these younger children behind them,” Barbor said. “The kids would want to come to be involved in something and/or the older children would be in charge of babysitting. … So we were seeing this need and this desire for the younger children to really be able to get involved in something of their own and not just be tagging along.” 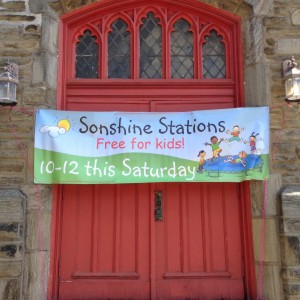 The sign on the door welcomes elementary-aged youth to the First PC of Olney on the second Saturday of each month.

Starting in July and running the second Saturday of each month for two hours, First PC of Olney has been inviting children inside for stations that focus on the arts and literature while also including a Biblical message. Of the four stations, three of them are constant.

One station is for teaching Bible stories, a multi-media area that is currently highlighting the parables of the Bible. Another station centers on literature that includes the reading of a children’s book and discussion thereafter. A third group is in the church’s gymnasium where sports are played, like basketball and floor hockey. The fourth station has a revolving “mystery” theme that can include anything from cooking to art projects to conflict resolution in children.

“Each month in that one mystery station we try to have a completely new, different, exciting thing,” Barbor said. “There will be more people in our congregation and also outside help that we can tap in to bring in some new ideas to keep it fresh and exciting for the kids but still hold to that theme.” 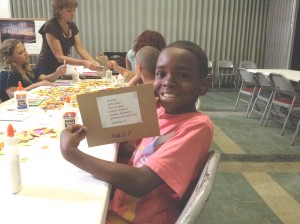 A youngster takes part in a program centered around learning the five A’s of the Young Peacemakers program for conflict resolution among their peers.

The morning ends with a lunch period that over the summer included donated bag lunches but now consists of things like hot dogs, fruits, vegetables, dairy products and whole grains.

“We like to be able to include a meal because it’s an area that’s somewhat impoverished,” Barbor said. “They’re so excited. We’ve been able to send them home with leftovers and meals for other siblings and people in their family, and they’re just so excited with that, too. So it’s another neat little dimension of the outreach.”

The response from the Olney community has been varied. The first time the Sonshine Stations were held, 12 children were on hand. As of late, that number has grown to be in the 20s on a regular basis. However, in October only two youth showed up due to stormy weather that kept many of the other “walkers” from venturing outside in the bad conditions. 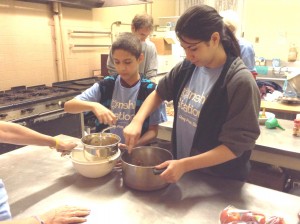 Youth work in a cooking station during the “Sonshine Stations” program at First PC of Olney in northeast Philadelphia.

“Even for those two kids, it was just a wonderful experience,” Barbor admitted. “The neat thing that we’ve been seeing is the discipleship opportunities where we have these same kids and the same adult leaders who are there each time from month to month. We’re getting to know them better and they’re getting to know us better. It’s really neat to see the mentor relationships that have come up. And a lot of these children are not church kids, they’re kids that are really just from the neighborhood that are coming. It’s neat to be able to build those bonds with them, whether we have a small number or a large number.”

Through a Synod of the Trinity Peacemaking Grant, First PC of Olney was presented with over $1,100 to help with materials as well as advertising the Sonshine Stations. Barbor said there is room to grow the program to reach 40 or more children on a given Saturday.

“It’s neat to see so many opportunities where we can reach these kids with the Gospel of Christ with even something as simple as nutrition and the message of peacemaking,” Barbor said. “There’s really fertile soil, and it’s a blessing to be able to have the funds to do something like this.”