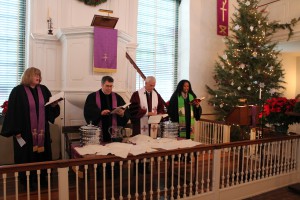 The Rev. Denise Anderson still has trouble believing what happened in Portland on June 18. That’s the day she, along with the Rev. Dr. Jan Edmiston, made history by becoming the first co-moderators of the Presbyterian Church (U.S.A.) following an overwhelming majority vote at the 222nd General Assembly. It also marked the first time in the denomination that two women held the two highest moderator spots, as there had never been women elected as moderator and vice moderator in the same year.

Speaking at the Presbytery of Carlisle’s meeting at Silver Spring Presbyterian Church in Mechanicsburg, PA, on Dec. 6, Denise recalled getting a phone call from Jan asking if she would run with her for the co-moderator position. They went round and round with the idea before finally deciding to accept the challenge.

“I said, ‘I am honored that you would think of me,’” Denise recalled, “because I would trust her to do it by herself. But the idea would not let us go. After a lot of prayer and back-and-forth, we came together with a sense of peace about presenting ourselves and letting the Lord do what the Lord will do. Well, Portland came and the Lord did what the Lord did.”

Six months later Denise, who at 37 years of age was the also the youngest moderator ever elected by the PCUSA, and Jan are one-quarter of the way through their two-year term and still basking in the glow of what was accomplished at that historic General Assembly. At the top of the list was the passing of the Confession of Belhar, which she described as “an amazing moment in the life of that Assembly.”

“It calls the church into confessing God’s call to unity among us and rejecting any ideologies that would use the gospel to enforce the separation of people along racial lines or any other divisions,” she added. “That was an amazing moment, and in that moment we proclaimed that God was leading our communion to not just reconciliation but the kind of reconciliation that occurs among equals, occurs among friends, among people who are on the same standing.

“Speaking to many of the commissioners from that General Assembly, the common sentiment from this last GA is that our denomination seems to have turned the corner,” Denise continued. “The contentious debates that we’ve been having we’re not really having anymore, they seem to have abated.”

Despite the positives from General Assembly, which also included the appointment of the Rev. Dr. J. Herbert Nelson as the denomination’s first black stated clerk, Denise admitted that there are still plenty of challenges ahead. Among them is the recent presidential election that has left many congregations divided and facing a turning point.

“We’re still dismissing churches,” she continued. “Money is still tight. Congregations are still struggling with how to be adaptive in what seems to be a rapidly-changing world.” 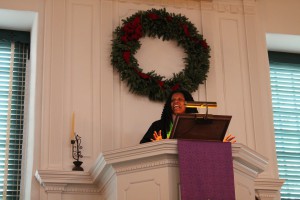 Denise is the pastor at Unity Presbyterian Church in Temple Hills, MD, a small congregation that she said could fit into one corner of the Silver Spring sanctuary on Sunday mornings. It was agreed that having heads of small churches like Denise represented among national leadership is an important connectional move for the denomination. Denise expanded on the struggles of congregations, especially smaller ones that seem to draw inward when times get tough, during a question-and-answer period at the meeting.

“Sometimes involvement from the presbytery, or even the synod or OGA (Office of the General Assembly) can be seen as an intrusion,” Denise said. “‘Are they trying to close us? Do they not think that we’re effective?’ But at the same time the quickest way to die is to go inward and not reach out and ask for help. Rebirth is such a scary, scary thing. I get the sense that our denomination is best addressing this with the 1001 Worshipping Communities. It’s sort of side-stepping it and looking ahead to what birth could look like, new life could look like. But nobody wants to talk about this because it’s hard.”

In her sermon that opened the meeting earlier in the morning, Denise admitted that many people want to go back to the good ol’ days, when an individual was in better health, when loved ones were still alive, when jobs were more secure, and even when churches were fuller on Sunday mornings.

Some of the questions Denise answered from the audience during the question-and-answer portion of the morning were as follows:

“I wonder if there are ways that we can streamline not just our agencies but how they’re run. I definitely think that the way forward for us… we’ll have to be a bit more efficient in how we spend our per capita dollars. I would hope that the way forward for us celebrates and respects our local contexts and empowers our local churches to act accordingly in their own local contexts. I wonder if we really know what our mission dollars are going to support world mission with. We need to communicate a little better what we’re doing.” 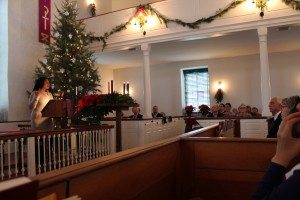 Denise Anderson answers a question during the Presbytery of Carlisle’s meeting.

How do we define what being Presbyterian means?

“There’s a shift in culture. People are less concerned about denominational affiliation than they are about where they can go to live into their call to Christ or learn about Christ. Given some of the shifts in culture, the connectionalism does not feel the same as it was. The connectionalism is going to have to come from people like us – the local pastors who are very intentional about the relationships that we establish among each other and the opportunities we search for in partnerships at every single turn. I’m concerned that some of the cultural shifts we have seen in America have led us to act as if we’re in bubbles, and I say that concerning every area of life – political, denominational, professional and in our local churches. I really think that it’s incumbent upon us to not only know that connectionalism but to act upon it and realize that we’re not alone.”

Are we reaching out to help our churches that are Native American?

“At our past General Assembly, we issued not just an apology for our role in subjugation of Native Americans but also initiated a study to refute the Doctrine of Discovery. The Doctrine of Discovery undergirded colonialism by asserting that there’s a Christian duty to spread Christianity throughout the world by any means necessary. One of our charges – mine and Jan’s as co-moderators – is to go to 95 congregations and issue this apology that our Assembly adopted. Our eyes are open and we can no longer sleep.”

How do we as Presbyterians become relevant again in society?

“I don’t see how we’re not relevant as long as we are keeping Christ’s commandments. And I hope we’re making a distinction between being relevant and being popular or being respected. If we’re feeding the hungry, we’re relevant, we’re necessary. If we’re clothing the naked, we’re relevant, we’re necessary. What I hope that we don’t spend too much time lamenting is our societal influence. I think the good news is that the generations that are coming up are very much interested in authentic connections with other human beings, and in many ways I think that’s freeing. For many years we spent time agonizing over how to make our worship services more vibrant. There’s an opportunity here to enter into authentic relationships with people that we’re probably overlooking, and the good news is that they would probably welcome that. I hope that we’re not afraid to look different.”